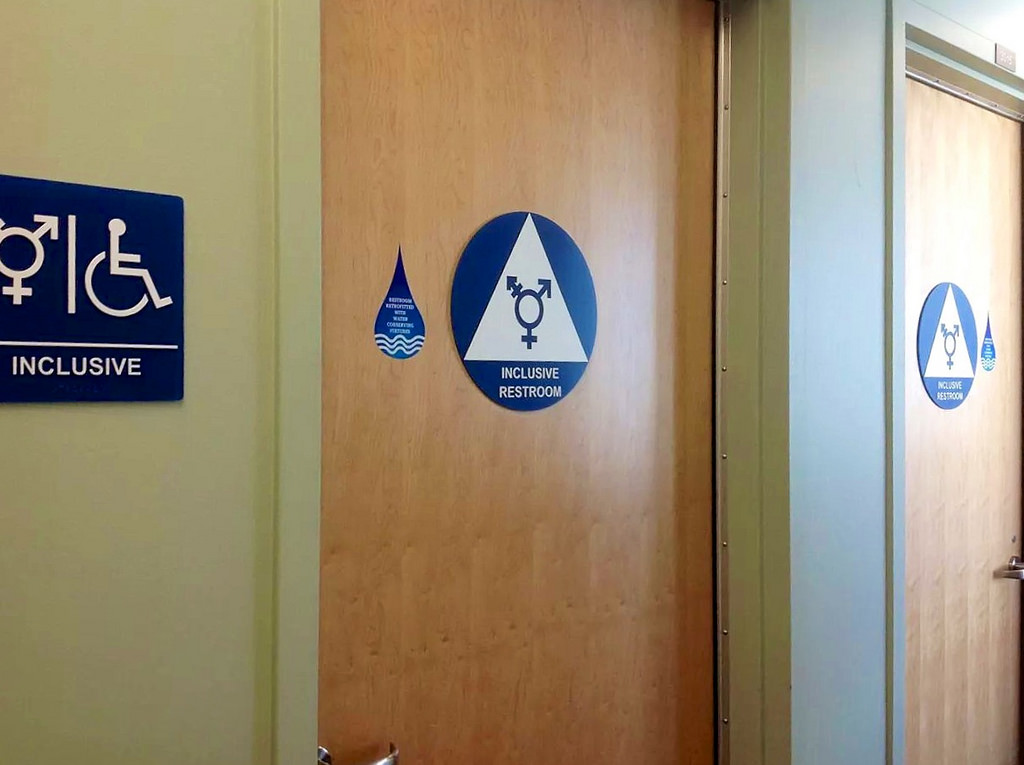 On average, Americans need to find a bathroom five to six times a day.1 Most of us just find a bathroom and use it; though sometimes we are inconvenienced by the random, annoying line at a theater or sports game. The “Bathroom Initiative” complicates bathroom use beyond waiting in line and a simple urge “to go”.  Supporters of Senate Bill (SB) 6443 and SB6548 launched the “Bathroom Initiative” after these bills failed. This initiative keeps transgender individuals from using the bathroom that matches their gender identity.  This issue is important for all people because it is an issue of discrimination, safety and privacy.

Safety and security is incredibly important. Marginalization and out-casting by barring people from bathrooms and locker rooms, based on gender expression, is sending the wrong message to Washington’s adults and teenagers; these types of policies directly perpetuate violence.   Transgender individuals experience much higher rates of sexual and physical assaults and harassment than people who do not identify as transgender.3,4 These physical and verbal assaults start to occur at a young age and continue across a lifetime.4 Segregation promotes assaults, harassment and bullying at work, at school and on Seattle’s streets.

The “Bathroom Initiative” was started by people from the “Just Want Privacy” Campaign. Most people would agree, in addition to safety and security, all people want and deserve privacy.  Having to physically justify the type of genitals present under a person’s clothes is a gross invasion of privacy. Instead, let us remedy all of the privacy issues presented by both sides of this controversy with a tried-and-true method called respect. Medical professionals including physicians, nurses, chiropractors and massage therapist are taught draping techniques to ensure a patient’s privacy and respect. Public bathrooms and locker rooms require all of us, who use them, to remain respectful to each other. People need to continue to be taught, at an early age, how to appropriately use public facilities including education to promote privacy such as not peeking under bathroom stalls and keeping your eyes to yourself.

Education is key to ensuring the health and safety of Seattle’s citizens.  Education is also key to alleviating fear of the unknown. Mayor Ed Murray’s recent mandate of diversity training for city employees is a step in the right direction. Seattle citizens who do not have access to these trainings can choose to educate themselves about the beautiful, diverse people who make up our city. Maybe try following South Dakota Republican Governor Dennis Daugaard’s lead by making friends with three transgender individuals.  After his experience, the Governor vetoed a similar bill that discriminated against transgender people.

At the beginning of April petitions for the “Bathroom Initiative” will begin circulating. If you have already decided to sign it based on political party affiliation, religious background or fear then critically question your decision.  This questioning is especially important if you are not someone who has a close connection with someone who identifies as transgender. Before signing your name to the “Bathroom Initiative” ask yourself: 1) How many transgender friends do I have? and 2) How many times a day do I use a bathroom? If your answers to these questions are less than one and more than one, respectively, then reserve yourself from signing and gather more information. The challenges of using a public bathroom will continue for many beyond SB6443, SB6548 and the new “Bathroom Initiative”. Transgender people are a small, yet incredibly noteworthy, segment of our American population and they deserve equal rights and respect.

The author, Melissa Ebben, is a Registered Nurse and a Forensic Nurse who lives in the Seattle area.

2 thoughts on “Op-Ed: The Problem with the “Bathroom Initiative””