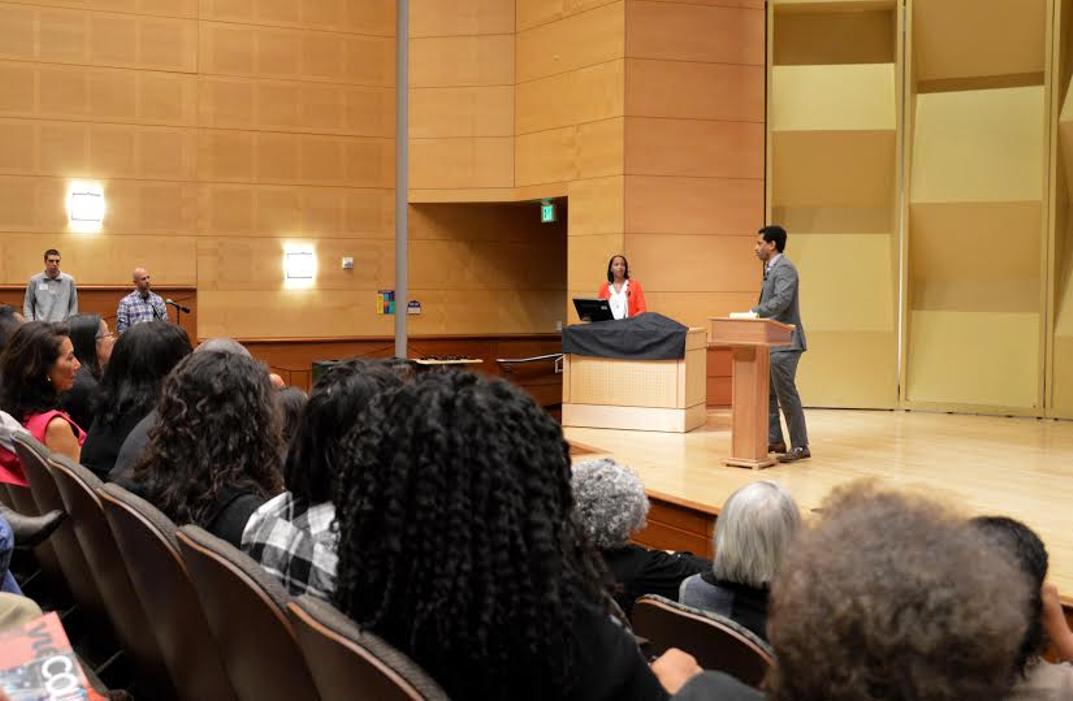 Once while he was working at MSNBC cultural critic Touré was on a team in charge of putting together a show on Black History Month. He found himself the only black person in the group of 15 people. One of them made a dismissive sound at the very idea of Black History Month. As Touré was grappling with what to do – call the person out for making a sound? – someone else said, “What about white history month?”

“We can laugh now, because now it’s funny here,” Touré said, retelling the story to an audience of several hundred at the University of Washington’s Kane Hall on Tuesday night, “but when I’m the only black person in the room with 15 white people and someone says that, and no one says anything, that’s very painful. That hurts me, that isolates me, I feel like the other, I feel different.”

In other words, it was a microaggression.

Touré, who is also a music writer, contributes to Rolling Stone and many other publications. He wrote a book in 2011 titled Who’s Afraid of Post-Blackness (which is about, as he puts it, “being able to do whatever you want to do as a black person regardless of the racial stereotypes associated with certain activities, like bungee jumping and country line dancing).

He was invited to the University of Washington campus to speak about microaggressions – actions that make those belonging to socially marginalized groups feel isolated, and demeaned.

“It’s like the pennies of racism, but it still hurts,” he said. Touré’s visit was part of a series of lectures called Equity and Difference, put on by the UW Graduate School and Alumni Association.

Touré shared several examples of microaggressions he personally experienced, such as people asking him to prove he was really a writer or a TV host. But microaggressions go beyond race. Turning the lens on himself, he recalled an incident where, in the course of a debate over the name of the Washington Redskins, he challenged a woman to name a player on the team – something he said he would have never done to a man.

Microaggressions come from a lack of awareness, Touré said. “Sometimes what happens is you become a sort of bull in a china shop – you’re unaware of where people’s natural sensitivities would be.”

Microaggressions are also symptoms of larger systems of oppression, Touré said, which are exemplified by the rise of Donald Trump. “It feels heavier to be in America right now… Trump is the embodiment of this country’s racist id standing up for one last round, trying to save itself, trying to push back the progress we’ve made.”

Touré proceeded to suggest answers to the question, “How do you deal with a nation that seems to hate you?”

One thing he advises against people doing was spending time educating others on why the microaggressions they commit are wrong. Several times during the talk he emphasized this view.

“You’re not here to educate every fool you come across – that is not your job… That work is time consuming, it is exhausting, it is emotionally taxing, and it is entirely external – it does nothing for you.”

Instead, Touré suggested people try to build a shield, a bulwark against the worst of the pain. This requires a clear sense of self, and an awareness of the stereotypes that persist against your group.“When someone commits a microaggression, part of what’s painful is they’re not really speaking to you – they’re speaking to an idea of you. They’re speaking to a bias-inflected vision of you.”

He also recommended meditation, which he said helped him realize his thoughts aren’t him.

The writer referenced the character of Django from the movie Django Unchained as an example of someone who broke free not just from physical shackles, but from ideas implanted in the mind that the character was not worthy of as much dignity and respect as anyone else.

Touré then related the story of traveling to New Jersey to interview Kanye West for Rolling Stone. At that time, roughly 15 years ago, the rapper was relatively unknown. Yet visiting his apartment, Touré saw a giant poster of West himself on the wall. When Touré asked about the poster, he was was given a profound answer. West said that he had to cheer for himself before anyone else could.

“He was unabashed about being his own biggest fan at a time when he needed that to have that ego boost… to get up the mountain that he wanted to climb.”

2 thoughts on “Touré: “Microaggressions are the Pennies of Racism””