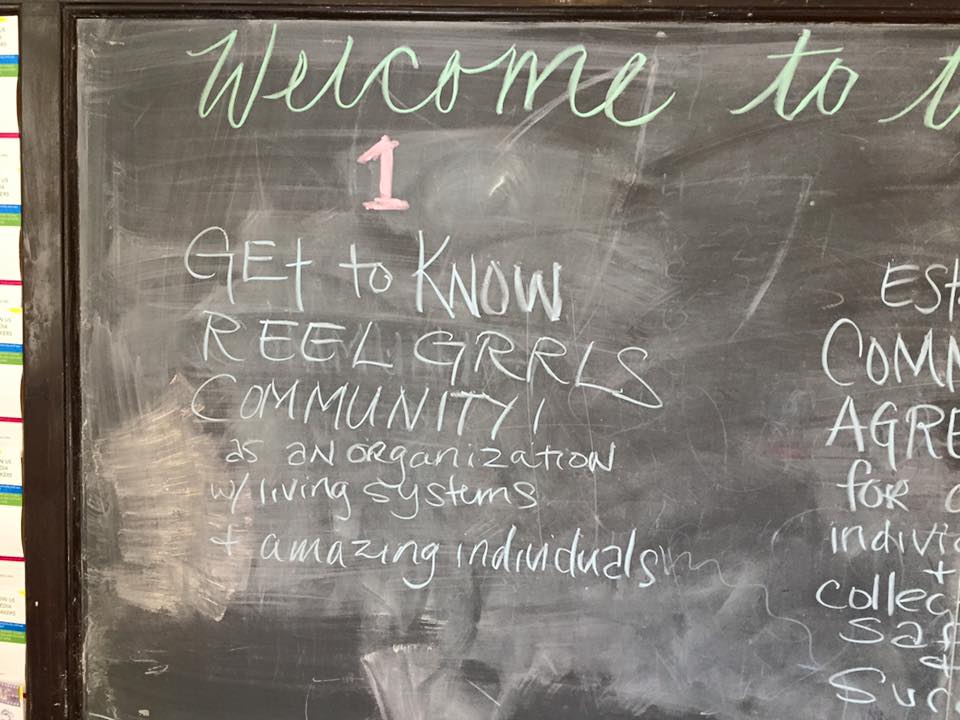 The first time I got sent to the principal’s office it was for reading. In the midst of a messy Spanish lesson where the boy next to me literally spat on another boy, I pulled out my book and tried to disappear. My teacher’s voice cut across the chaos. “Get your things and go to the office.” The room went silent. It was one of the few times she spoke to us in English and her anger was palpable, as was my humiliation.

I spent the majority of my middle and high school years feeling silenced, judged, and alone.  I never want anyone to feel that way. It’s one of the reasons I am passionate about girl’s education. My parents did everything they could to wrap me in love, to fill my life with smart, incredible, accomplished female role models, and yet what I learned at school about what it means to be a girl still damaged me. Now, as the Program Manager for Young Women Empowered (Y-WE), I try to do what my parents did for me, but on a larger scale, crafting a space and a community of incredible women to support our girls as they navigate everyday life.

Recently Michael B. Maine was appointed the seventh board president of Reel Grrls, a local nonprofit known for providing media literacy and production training to girls and gender non-conforming youth. He is the first male identified board president, and while the decision was unanimous, it has been controversial within the greater community and brought to light the question of what allyship should look like.

Proponents for girls only educational programs cite statistics illustrating that girls educated in single gender environments ask more questions, perform higher in math, science, and tech, and maintain higher self-confidence throughout their teen years. So how can we provide spaces in which girls thrive, but also deal with the reality that men make up half the population? There are those who think boys and men have no place at all in girls programs.

“Thanks for Mansplaining feminism to me, Michael,” writes Maureen in the comment section below the letter from the board announcing his appointment.  “So, when do you change your name to: Reel Grrls need Men to Lead Them?”

As Reel Grrls board member, Teresa Mozur, points out in her response there is also some confusion as to what this appointment means. “I’d like to inform you that Michael is not leading the organization, that role still belongs to our Executive Director Nancy Chang. Michael is serving in a volunteer 2 year term as the Board President, leading the Board of Directors (also volunteers) that governs and advises the organization.”

Still, as the Board President, Maine will have a voice in how Reel Grrls is run.

“Some people are like wait a minute…why is there a dude here?” says Maine. “ It’s making people ask questions. What is feminism? What is allyship? What role, if any, should or can a person who is a male identified person really play or contribute in a feminist environment?”

Founded by Malory Graham in 2001, Reel Grrls is the first media arts center in the United States that is specifically for girls and run by a staff of all female identified teaching artists with a mission to “support young people to explore, critique and author media through a feminist lens.”

Maine, 31, is a photographer. He is also Creative Director and Business Consultant for Menvra Labs. As a young person Maine loved playing with cameras. Growing up black in the Unites States, it didn’t take long for him to start noticing the patterns of systemic oppression inherent in media bias. “I used to play a game with myself where I would turn around while I was listening to the news and I would see if I could guess what the person looked like and I was right pretty much 100% of the time,” explained Maine. “… every time I saw somebody that looked like me it was always negative.”

These early observations prompted Maine to explore how media can be used to tell a different story and sparked his passion to get involved with Reel Grrls. “I actually just drove down to the Seattle location and knocked on the door and said hey my name is Michael. I’m a fan of Reel Grrls and have been for a while and I just want you to know that if there’s anything that you need from me, or any way that I can be of assistance or support as an ally or friend just let me know and that’s how that started.”

Since 2011 his contributions have ranged from photographing events to serving on the board and building alliances between Reel Grrls and other media outlets and technology firms.

“The things that I would attend are just things that in general were open to the general population or open to the general public.” said Maine explaining that part of being an ally is knowing how to participate appropriately. “That was one thing I was always very concerned with. I believe very strongly that there should be spaces, I don’t want to use the term exclusive but that is the term, ‘cause I do think there should be spaces where men, especially people who identify as men don’t need to be there.”

Are male allies a necessary part of girls education? To answer this question I interviewed several women who are all Executive Directors of girls programs in the Seattle area.

“To me intrinsically allies are a part of the work,” says Jane Hinton the Executive Director of Powerful Voices, a program with a focus on social justice and working with girls to realize their dreams.  Powerful Voices has always had men as a part of their board of directors.

Hinton points out that the discourse on allyship must include multiplicity. “We think and talk about allyship in a lot of different ways not only allies who are male or male identified, but adults who are allies and white folks who are allies to people of color.”

Some organizations choose not to invite men to their board. “I think that each organization needs to make that decision on their own in terms of their own development organizationally,” says Victoria Santos, who along with Jamie Rose Edwards, co-directs Young Women Empowered (Y-WE). Y-WE is an organization dedicated to cultivating girls’ leadership through intergenerational mentorship. Though Y-WE has chosen not to include men as a part of their board of directors at this time, they incorporate allies into their community in other ways.

“We have always had male allies, absolutely, from Jamie Rose’s Dad coming and cooking to her husband doing childcare so she is able to work with the girls or gathering wood so we can have a bonfire or going and setting up the place for the auction,” says Santos, but makes this distinction. “We have always had male allies within our organization, its just we do not center maleness in our organization.”

“Michael and I gel well and work well together and he is also extremely respected and supported by everybody else on the board,” says Nancy Chang, the Executive Director of Reel Grrls.

“Reel Grrls is shifting the culture of media making and film making and the reason why its important to have these programs is because young women want to have the space to be involved in these things,” explained Chang. “and being able to feel supported and feel that their ways and perspectives of doing something in a male dominated culture does not always align with the way that young women are socialized to navigate in the world.”

While differing in approach, each woman affirmed allyship as a welcome and important part of their organization with the caveat that the most important thing is doing the actual work of creating spaces where girls can thrive.

“What I hope to leave behind is a very high-functioning board and organization that is carrying out the mission and also not being afraid to evolve the mission to make sure it’s staying relevant,” says Maine. “Basically what it comes down to is that I just try to be the best friend that I can be to the organization.”

Years later I ran into my old Spanish teacher in the home of a family friend. She apologized to me for sending me to detention. I was surprised she even remembered, but she did. “I watched you shut down,” she admitted.

As an educator myself, I have made plenty of mistakes, but worse than trying to reach a kid and failing is not reaching out at all. I don’t have a definitive answer for what allyship should be, but I do know that if I could go back in time to my own girlhood and live it differently, my biggest wish would be not to feel so alone.

I want people from all backgrounds of every identity to come together to support girls to feel strong and witnessed and to keep them engaged in the work of becoming their best selves.

Finding meaningful ways to incorporate allyship into our programs may require some difficult conversation, but I am happy to know that there are feminists of all genders and in general people who care deeply enough to use their time, talent and skill sets in service of our vision of a better world for these girls. So, thank you Michael Maine for pushing the boundaries and being a friend not only to Reel Grrls, but to real girls.

One thought on “What “Reel” Male Allyship Looks Like”