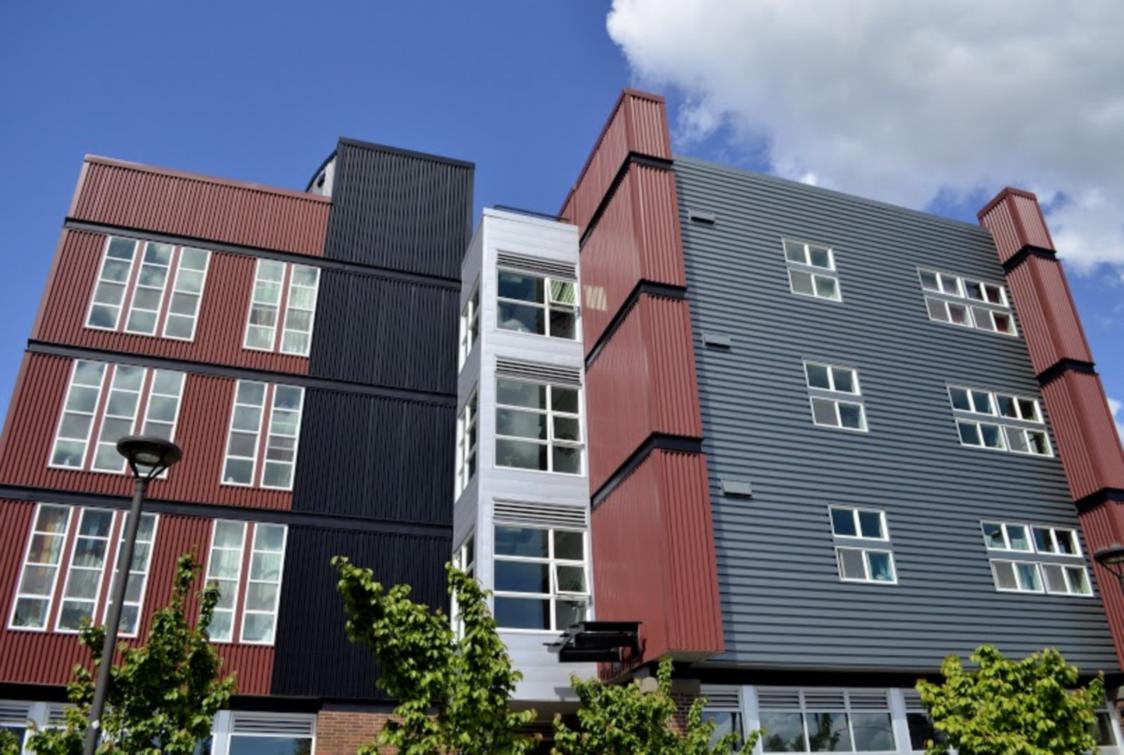 Sitting across the way from Franklin High School, the Mt. Baker Lofts can been seen as yet another series of apartments sprouting up in a city filled with smart-growth high-rise residency. Now take a closer look. From a table inside Campadre Coffee tucked in a street-level corner of the building, you can turn your eyes away from your steaming mug to look at some gorgeous mosaics, locals mingle with some artists amongst low-key electronic beats and dreamlike illustrations exploring existential philosophy. It’s evident these lofts have something unique. Here, photographers, jazz musicians, and painters coexist, all part of the thriving art scene of the 206.

The Mt. Baker Lofts are part of the nationwide ArtSpace projects, which include similar residences across the nation. They all provide affordable housing for eligible artists and creative professionals, as well as commercial space. Currently the Mt. Baker residency hosts up to 50 artists with hundreds more on the waiting list.

And the artists living here don’t have to look far to see the variability and span of the local art scene. These residents have occupations and fields of work that range from dollmaking, to mixed-media sculpture, to videography. Collaborations are common between artists, such as a cartoonist and a videographer creating a Japanese character stop-motion movie. Subsequently, their work has been displayed at numerous galleries and shows around the city and across the country.

Artists have also come from all across the country – and sometimes the world – from various circumstances. Craig Cundiff is a illustrator residing at the Lofts: “I’m originally from New Orleans, I moved here after Hurricane Katrina,” he said. “So I’ve been here for about 10 years, tirelessly trying to get better at art.”

A mostly self-taught artist, Cundiff’s love for drawing was supported from youth, when his parents helped provide him with supplies and classes. But he was also motivated by other influences. “I think like in the first grade, the original Street Fighter came out, and its popularity was based on how well you could draw Street Fighter characters,” he said. Positive feedback and and competition with other artist drove him. “It always helped me to try and take it to the next level.”

Since coming to Seattle in 2006, Cundiff has established his name within the Seattle art scene, although he acknowledges that it was difficult at first. “It’s hard to get into, but as soon as you’re in it you realize how tight-knit the small community is,”  he said. Cundiff’s breakthrough show in the Emerald City was hosted by the Alibi Room in Pike Place.

His main body of work is made up of illustrations and drawings exploring anatomy, space, and displacement, working with materials like  oil, pastels, and graphite. Acrylic portraits, musculature, and body forms populate his portfolio along with displaced urban familiarities such as garbage containers and abandoned shopping carts among natural landscapes. Cundiff’s work was recently shown with many of his contemporaries, whose work played on concepts from female deities to the duality between physical form and spiritual being.

The lofts are full of creative talent from right here in Seattle as well. Resident Henry Jackson-Spieker is a sculptor and metalworker hailing from the Emerald City “As a kid, I was always taking stuff apart, putting stuff back together,” he said. “My parents really wanted me to channel that energy into something more constructive.” Local Pratt Center for the Arts, offering classes in metalworking and glassblowing, set Jackson-Spieker on his path. He then pursued fine arts studies at Western Washington University.

Jackson-Spieker’s work can be easily recognized for its unique attention to spatial relationships, and playing with that concept in 3-D material. “I think much more spatially, and in that way I feel it’s much more intuitive to me,” he said. His work has evolved currently to explore the source of physical tension in physical works and how different materials can cohesively interact. “I want to see how some materials that don’t naturally go together, like glass and metal, can interact, and create that balance and that duality,” he said. His techniques also incorporate the complex skill of glassblowing and glass carving.

Cundiff and Jackson-Spieker won’t have an absence of an audience and reception for their work. They are two strong examples out of many artists finding their way in a vibrant, art-centric city. Seattle boasts around 100 commercial galleries, as well as numerous artist and nonprofit studios open to public viewing, in addition to renowned institutions such as the Seattle Art Museum and the Burke Museum.

In addition to these more formal settings, local artists are finding recognition in more austere venues. Cafés, bars, localized gatherings, and festivals are hosts to a burgeoning underground art movement with elements of street art, urban art, and pop culture and design, commonly dubbed “low-brow” or “alternative art.” This current trend in local art has become extremely popular in recent years, as well as displaying art in unconventional areas and settings.

Closer to the artists’ homes, some of the work can be seen in featured at Compadre Coffee. Founder Aubrey Batchelor, who is a musician and dancer herself, opened shop in October 2015. Since then the café has displayed visual artwork from four of the artists, with plans to continue to display work from creatives inside and outside the lofts. “I think that people enjoy that connection to their own neighborhoods and their own community,” said Batchelor. “I’ve had no shortage of people wanting to hang up their work or perform, so that’s really exciting.”

The café has had an influx of unique talent from across the South Seattle area. Local workers coming off their shifts, students, and ordinary residents around the Rainier Vista and Columbia City neighborhoods have showed off their talents here. “One of the Franklin High School students comes and plays, some musicians a couple blocks down the street. Some of the Metro bus drivers formed a band and played here,” said Batchelor. “And that’s been really fun for me, having this shop to provide a place where people of all ages can enjoy themselves.” The café’s counterparts can be easily found in the immediate neighborhood, such as the Columbia City Gallery and the Royal Room, hosting artwork and live music/open mics respectively.

This strong local foundation of arts institutions reaffirms Batchelor’s faith in the community connections and cultural identity through supporting local artists. For many of the Lofts’ artists, the support for the local art scene has become a vital pathway to their success. Cundiff is one example, citing the influence of many of his local mentors.“There’s a handful of local artists who are nationally acclaimed and that are very approachable, so I go and talk to them, and ask how did they get themselves to that next level,” he said.

For Jackson-Spieker, being connected to the local scene means that he can participate in the exciting and unexpected that the local art scene has to offer, “With the influx of people to Seattle, there’s a lot of push and pull  in speaking about expanding the art scene,” said Jackson-Spieker. “And it’s all really interesting. I feel really fortunate to be plugged into this vibrant, constantly changing scene.” Cundiff has also acknowledged the bonds between artists, and speaks highly of opportunities that bring creatives together. A prime example is Gage Academy’s “Drink and Draw” event. “Some of my favorite artists included Casey Weldon who runs a ‘Drink and Draw’, which is where a bunch of artists gather together and draw, it’s very casual,” said Cundiff. “Drink and Draw gave me a chance to find out what mediums they’re using, and it’s really conducive to just bouncing ideas off each others, and the art world has just opened to me on that level.”

With the advent and collaboration of local talent, Seattle has become resurgent in creative activity in various areas. “I think contemporary pop surrealism is trending. It’s using techniques of the masters, but with 2016 sensibilities,” said Cundiff. “But I think if there is a niche or genre, there’s someone out there who really cares about and is really good at it.”

Some are just happy to sit back and observe what’s next. “I guess I just want to step back and watch it happens as it reflects this city, and kind of just float along,” said Jackson-Spieker.

Regardless, exciting changes are frequent in Seattle’s art scene. The continual emphasis on young artists experimenting with materials, settings, and venues, gives the scene a unique edge over others, even if sometimes the art is unsanctioned and unconventional. Wheat-pasted posters, street performance art, and intricate graffiti murals can be spotted everywhere. But that isn’t to say public support isn’t welcome. The Washington State Commerce Department offers grants ranging up to $2 million, while the Arts in Public Places program has helped to install up to 4,500 pieces of art.

It’s clear that this recent surge in creative activity has raised the artistic profile of the city in the eyes of many. It is difficult to take a stroll down 1st Avenue and not notice galleries tucked in the corners of historic residences or taking up buildings packed with patrons gazing at the latest from the Emerald City’s creative talent.

“Art gives this community such as good sense of culture, and unity around that sense of creativity. It’s so important. That holds true for almost every community big and small,” said Jackson-Spieker. From Roger Shimomura’s iconic East/West mural in Westlake Station funded through the state, to the murals adorning the tallest buildings downtown, Washington is exuberant in its support for the arts. “I have a lot of personal appreciation of the scene, like the Roq La Rue gallery which puts out some of the best shows in the entire nation and there’s just a lot of people and lot of talent dedicated to art here,” said Cundiff. “I mean, without art, without that culture, what is there?”

Jeff Nguyen is a senior at Garfield High School and the South Seattle Emerald’s student intern.