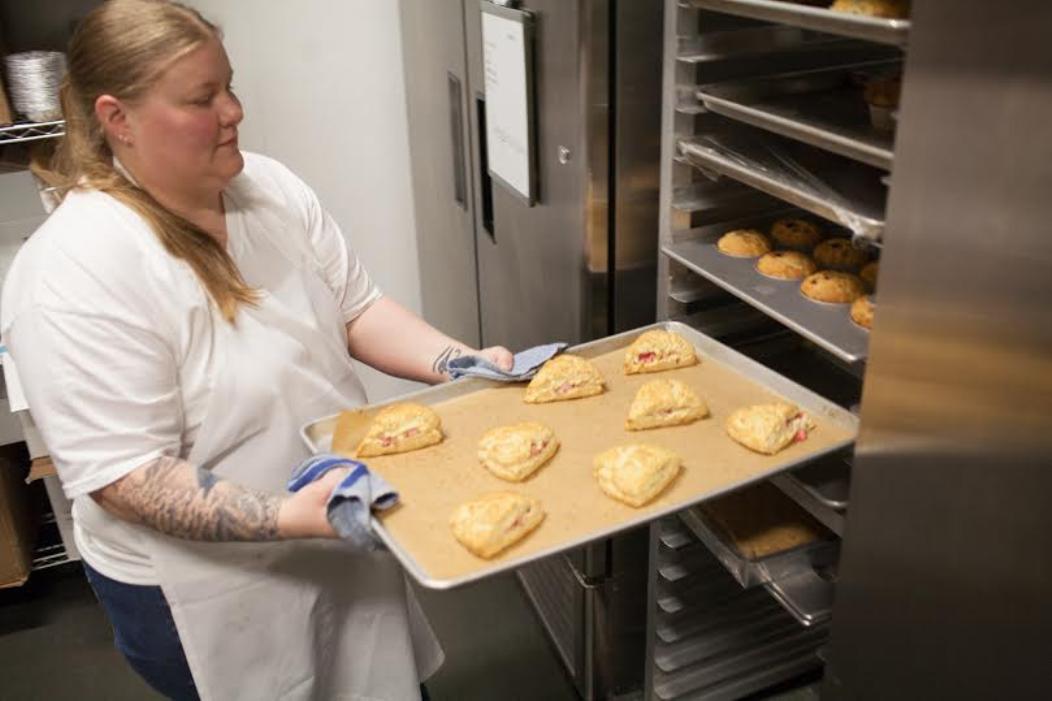 Before the sun begins to peek over Lake Washington, six days a week Amy O’Connell can be found nearby in her kitchen at Rainier Avenue S and S Kenyon Street preparing baked goods with love at her new venture Beach Bakery.

“This is the best time of day, it’s so peaceful” says O’Connell, as old soul tunes quietly play over the kitchen loudspeaker. The Bakery opened at the beginning of April in the Rainier Beach/Brighton area.

On this particular morning, she’s baking all sorts of muffins and scones: rhubarb, strawberry honey, cilantro, jalapeno & cheddar.  She also sometimes bakes up a biscuit concoction or waffles on the weekends.

O’Connell, 38, lives in Boulevard Park but grew up in Rainier Beach where her family still lives. Looking for a place her bakery could call home, she saw the site that once housed the old Pancake House (now the Kenyon Center) as a viable location. “I watched this building go up and started thinking this could be the spot” she says cheerfully, sipping a cup of coffee. “We called and talked to the building owner and it was over. We really liked each other and he said YES!”

Anchored to the community, she went to Emerson Elementary, South Shore, and Rainier Beach High School for two years before graduating from Franklin High School.

“This neighborhood is so unique and so diverse, the food here incredible,” she says, giving nods to other local establishments. “It’s an amazing opportunity to come from this neighborhood and be a part of creating jobs here.”

Her staff of five employees, consists of herself, a full-time baker who goes by ‘Des’ and specializes in cakes, and three other front of the house employees who all live in nearby neighborhoods and are part of different cultures.

Although she’s always had a love for baking, she found a path to her passion after being in food service for nearly two decades and working at Whole Foods for six years.

“I used to come home from work after a bad day and put all my love into baking one of my late grandmother Geraldine’s recipes or experimenting,” says O’Connell, who draws inspiration from her family and serves up a generational zucchini bread recipe every day to customers.

Her passion eventually led her to leave the corporate life and enroll at Le Cordon Bleu Academy in Tukwila, where she honed her craft.

“I was a little nervous because I hadn’t been in school for a long time,” says O’Connell, who was skeptical at first about returning to school. “It was a fast-paced and very thorough program. I had a blast, and I learned a lot in the process.”

A quirky painting of sliced butter on a canvas rests front and center on the wall of her bakery, given to her by her classmates who she graduated with as a reminder of their love for pastries.

After finishing school O’Connell started her working tour as a pastry chef and baker around some of the city’s best bakeries. “I did my externship and worked briefly at Columbia City Bakery doing breads, I then worked at a few others around the city and finished my baking tour at Madison Park Bakery for two years.

“I heard the word ‘no’ more often than I’d care to admit,” Amy explains of the initial challenges of finding a place in the Emerald City to open Beach Bakery. “Food service can be a risky industry, not many want to lend you money.”

But she has been ecstatic with the reception the community has given her so far.

“Working in this industry I know I can’t always afford a cup of coffee and a scone everyday,” says O’Connell, who believes sometimes people feel the financial pinch in South Seattle more than other parts of the city. “But it has just been awesome. People have been so welcoming, I’ve known so many people down here for so long and everyone has been so supportive–we’re doing well so far.”

For more than three decades O’Connell has watched the ebb and flow of southeast Seattle first-hand, acknowledging that it has faced its fair share of adversity with violence and negative perceptions.

“The way that communities like this get better, is from people who come here, live here and run businesses here that try to make it a better place,” she says. O’Connell will also soon place a ‘Safe Place’ placard in her window, that will ensure anyone in distress can come to her bakery and the proper authorities will be called.

She wants to embrace her neighborhood’s diversity and bake pastries from countries from all over the world as well, some she mentioned include Latin America, Israel, Italy, Iran, as well as the tried-and-true classic french pastries–but she’s always open to suggestions to learn from other cultures.

The art on the walls will begin rotating later this year, sourced from local neighborhood artists and supporting local schools by hosting students’ work as well.

If you see the signs strategically sitting in different areas along Seward Park Ave or other neighborhoods follow them to Beach Bakery and stop in to say hello to Amy and her team while you try a delectable baked delight. It’s quite possible you may see an old friend, or make a new one.