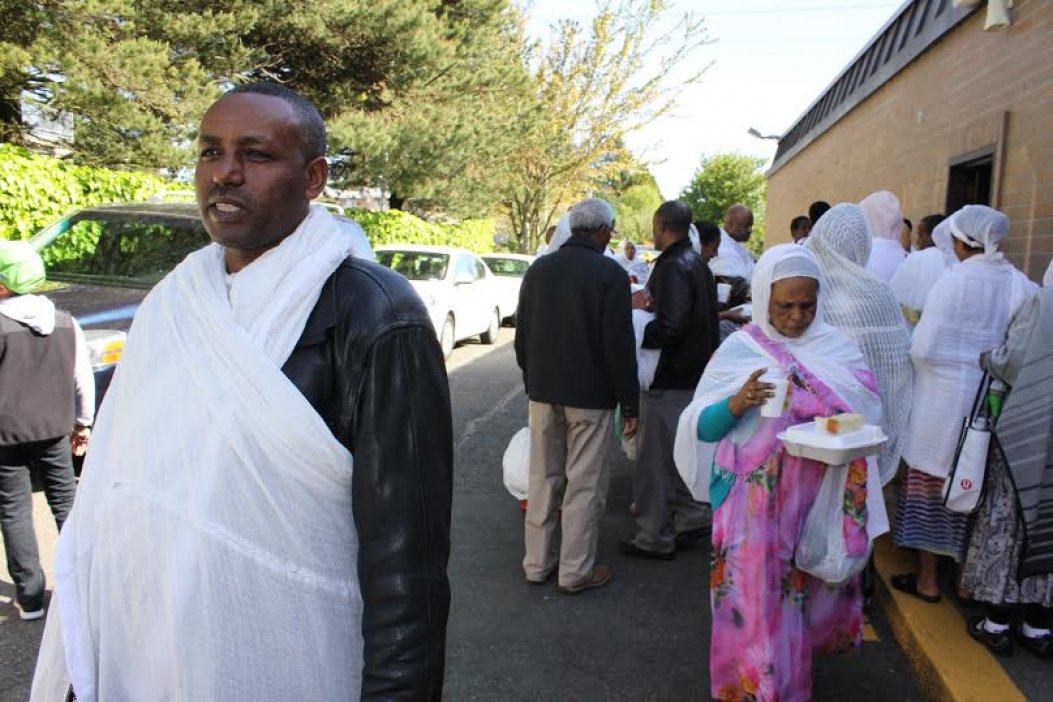 Ethiopian Orthodox Christians in the Seattle area have bought and remodeled the former Skyway Library building into an Ethiopian Orthodox church. The building reopened on March 5, just in time to celebrate the May 1 Ethiopian Easter.  It now hosts two Tabots – replicas of the Ark of the Covenant – signifying two churches, St. Mary and Our Saviour.

Parish Committee members Hirut Dube and Genene Degefu said members of the church conducted a two-year search for a church property. King County listed the library building for sale, and finally sold it to the church in 2015.

Degefu, a nursing assistant at Swedish Hospital who also serves as a treasurer for the Parish Committee, said, “In the last three years, because the church’s service was happening in a good manner and our follower membership grew, we needed to purchase a church building.”

“Because it was God’s will and the faithful diligently cooperated, the purchase was made,” he explained, “It was a King County library and now we converted it into a church.”

The postmodern church now attracts diverse followers who speak several East African languages, travelling not only from South Seattle, but all the way from North Seattle, West Seattle, Bellevue and Tukwila.

Kahsay Gebrikidan is an Eritrean who came to the United States in 2010 through Ethiopia as a refugee. He currently lives in Tukwila and works as wheelchair assistant at Sea-Tac airport, and began attending the church not long ago.

Attracting young people and new immigrants, the fast growing church’s appeal seems to be its adherence to the traditional way of performing services, as well as using technology for slideshows (so attendants can see and follow proceedings) and loud speakers.

The church holds services every Sunday, and  on some weekdays, depending on where  the 21st and 27th fall. These dates signify the monthly holidays of the Tabots after which the church is named.

Degefu said the church will provide regular services: Mass (Communion), prayers, preaching the Gospel, baptizing, and celebrating Epiphany together with other Ethiopian Orthodox churches in one chosen location.

Knowing the challenge of bus route 106, which serves Skyway, I asked Degefu about the wisdom of choosing the location.

“Those who don’t drive are facing problems with transportation because there is only one bus and it is late especially on Saturdays and Sundays,” he said. “We bought a van, a blue one, for the church and we are giving services. We pick up the faithful from Rainier [Beach] and give them a ride back.”

He added that they had planned ahead with purchasing a public van. Regarding whether non-believers can come to the church, Degefu said, “Anyone can come. The church is free. Anyone can come and pray. Anyone who wants to be salvaged can come. Our church is open to the public… for all Christians.”

For Dube, a case worker at the Ethiopian Community Center, it is a longer commute than to other Ethiopian churches she sometimes attends closer to her home in South Seattle. She explained that membership loyalty justifies the commute.

Several individuals expressed their gratefulness that their church, founded just five years ago, was able to purchase a permanent space in a quiet location.

“Ohhhh, this [property]? It’s God who gave [it to] us. It cost $1 million but it is worth more than that – $2 million,” Dube said.  “It is convenient for the faithful because there are several amenities in the area such as the post office, a bank and other things… We are satisfied.”

It appears the $1 million deal was a win for both King County Library System and the building’s new owners.