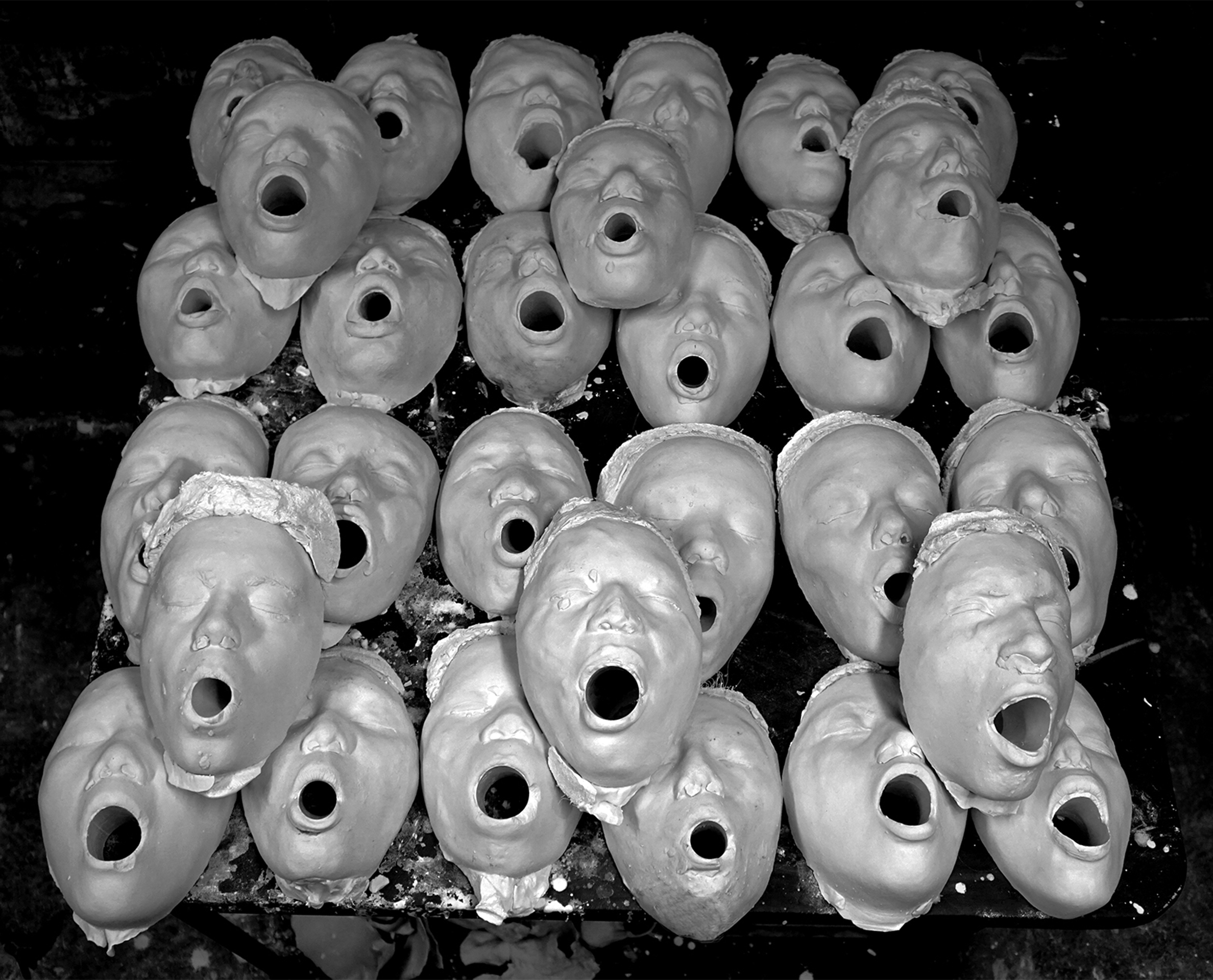 Thanks to George Lee, birds visiting the Brighton neighborhood’s Angel Morgan P-Patch will soon have imaginative new digs to nest in: the faces of South Seattle children.

City of Faces, a sculpture of 30 bird houses designed from the cast faces of South End youth, will be installed at the P-Patch, located on 39th Avenue and Morgan St, on Sunday morning, followed by a neighborhood celebration from 3 to 6pm expected to draw more than a hundred people.

Lee, who lives directly across the street from the P-Patch, birthed the idea after witnessing two unrelated shootings within 4 weeks of each other last summer, shortly after he and his wife bought a house in the Brighton neighborhood.

The first took place when Lee was walking home from the Othello light rail station. Just seconds after passing  two young men on Martin Luther King Way, he heard one say, “Don’t do that!” a moment later one of them has been shot in the stomach, just ten feet away from Lee. Only three weeks later, Lee witnessed two speeding cars trading gunfire in front of Aki Kurose Middle School, just 4 blocks from his house, forcing him to abandon his bike and flee.

The incidents caused Lee short-term PTSD, but also stirred a passion in him for neighborhood improvement.

“Some people have lived here for years and have heard gunshots, but never witnessed anything.  I did in my first couple months here,” he says, taking a short break from art-making to walk around the thirteen year old community garden, which will soon feature the last batch of birdhouses now baking in his home’s fire pit.

As he passes raised plots of kale, Swiss chard, and strawberries, Lee, leisurely dressed in a flannel shirt and Crocs, shares that he was able to put the incidents in context, measuring them against the day-to-day life he’s experienced since moving to South Seattle last year.

“We have some truly amazing people here. I have a Vietnamese neighbor who can barely speak any English and but she brought food to me for a week after I moved here,” he exclaims.

The adoration for his community, especially the youth he felt had been unjustly impacted by the two shootings as both took place near traditionally safe zones of preschools and playgrounds, motivated the artist to stage an “art intervention”. For Lee, who specializes in site-specific sculpture and social practice art, that meant mating neighborhood youth with nature and sculpture.

Bird houses, the P-Patch and children seemed the perfect mix for Lee, who received funding for the project from the city’s Office of Arts and Culture.

“Birds need homes, just like people do,” he says.

Relatively new to the area, he relied on organizations and leaders within the community who already had ties to youth, including the art teacher at Aki Kurose, Rainier Avenue Church, the Somali Family Safety Task Force and the Rainier Beach Community Center’s After School program.

During the month of March, Lee travelled to classrooms, church basements, and community center recreation rooms to cast the faces of South End middle and high-schoolers for his bird houses.

While more than 100 youth assisted with the project, only 30 ended up enduring the 25 minute casting process which constituted having a hairnet placed over their head, Vaseline cover their faces as prep for Alginate being applied to it, all while sitting stationary with a rubber tube stuffed into their mouth to breath out of as they waited for the Alginate (a seaweed based material) to cure. They also weathered giggles and groans from their amused and sometimes “grossed out” peers.

Those brave enough to have their face cast were rewarded with $15 gift cards to Safeway, McDonald’s or Starbucks.

Lee, who has his Master’s Degree in landscape architecture from the University of Washington, says the process was enthralling for the kids, with both teachers and parents appreciating the project offering youth the opportunity to enjoy an activity having nothing to do with a smart phone or computer.

“It was cool that this was an analog process, as opposed to a digital process. They got to enjoy something hands on,” says a smiling Lee.

All in all, the New England transplant, who moved to Seattle in 2007 and previously lived in the Central District, is proud he could create an art installation ingrained with South Seattle DNA.

“Public art should be integrated into neighborhood’s here, instead of all of it seeming to happen in Capital Hill,” he says, sharing that he’s aware he carries the gentrifier tag.

“I really wanted to be conscious of how to be a white ally. Typically when gentrification happens, it’s usually the artists who move in first,” he says.

Those issues are why Lee went out of his way in creating the installation to pay respect to those who originally occupied the land he now lives on.

The 30 seed-like ceramic birdhouses, which will be displayed until October 15, will be hung from organically curving posts of red cedar, a wood associated with life and ancestry in local tribes including the Duwamish.

While he has some level of trepidation about how the project will be received, he’s excited for the kids who underwent the fast casting process to see the finished product.

He envisions standing on his porch across the street from the P-Patch, smiling as he watches the young people he worked with be captivated with the sight of birds going in and out of the children’s ceramic mouths that serve as doors, all the while sharing the same thought as Lee: In the end, all the trouble I endured was worth it.

The celebration for City of Faces takes place at Angel Morgan P-Patch (3956 S Morgan St, Seattle, WA 98118) from 3pm-6pm. The event is free and there will be food and refreshments. The Installation will be displayed until October 15th