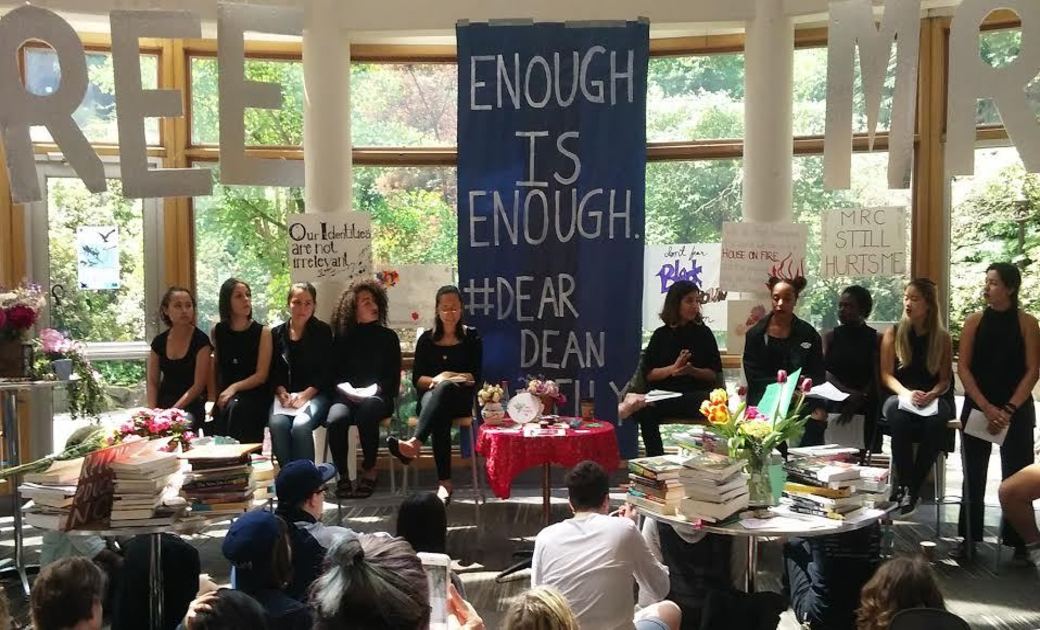 (This article was originally published by YES! Magazine and has been reprinted with permission)

Day and night for more than a week, a multiracial coalition of Seattle University students has occupied the Jesuit university’s Matteo Ricci College to protest what it says is a long-standing campus climate of racial oppression.

The students, most of whom are people of color, women, Queer, and from immigrant or working-class families, are stationed outside the office of the college’s dean, Jodi Kelly, whose resignation they are demanding. Since beginning their sit-in, protestors have received death threats through letters and phone calls and violent threats in person. Drunken White males, believed to be students, showed up at the occupation to scream violent threats at protestors, telling them to “leave this country.”

The student protestors are circulating an online petition signed by more than 1,000 people asking for the dean’s removal. Some alumni have started a separate petition in defense of Kelly where a few signers identify as people of color; other students of color have come to the dean’s defense.

“This is not personal against Dean Kelly,” says Fiza Mohammad, a student occupier. “She is only a symptom of a larger issue in this college.” Mohammad is a member of the Must Reform Curriculum, Culture, Climate Student Coalition (MRC Student Coalition), the group leading the sit-in.

The larger issue, the coalition claims, is a campus environment where students of color, for more than a decade, have found themselves belittled for their backgrounds, ridiculed for their accents, and dismissed as “emotional, aggressive, and too urban” by the school administration when they bring up racial concerns.

On top of this, students are also requesting that professors be trained in critical race, class, and gender theory, that the university create a democratic student and faculty committee dedicated to reviewing Matteo Ricci’s humanities program, and that the college recruit and support a more diverse body of students and professors.

Students want a broader curriculum that complements Eurocentric scholars with the works of non-Western scholars. They are calling their proposed curriculum a “liberatory education.” Books like White Like Me and I am Malala fill the students’ “people’s library,” which they want added to the curriculum. They’ve also initiated teach-ins around racial justice, poverty, and the prison-industrial complex—all while sleeping on the floor of the building and carrying a full course load.

“We’ve had black and brown students in our classrooms for years,” says Mohammad. “It’s about time we learn how to teach them.”

Still, the dean has refused to step down, stating, in an email to the press, that doing so “would betray over 1,300 alums and 195 current students.” She added that it would be contrary to everything the college teaches.

The coalition says it will not end its occupation until Kelly resigns—even after the school year ends June 11—because it claims she has repeatedly perpetuated White supremacy and racial oppression in her day-to-day treatment and neglect of its members’ concerns. The students say they have exhausted every other available formal channel, including meetings with the administration and the student committee, to address their concerns.

In an open letter, university President Father Stephen Sundborg wrote that he “cannot pretend to know how deep [the students’] pain goes, the amount of harm it has caused, or the extent of our own shortcomings as educators and administrators.”

The administration has proposed conducting a comprehensive external review of the college’s degree program curricula and hiring a consultant to conduct an assessment of the school’s culture and climate. They have yet to announce when this will happen.

A group of tenured Seattle University professors are supporting the student coalition. “The mounting evidence of incompetence and negligence and fear created by the dean makes it difficult for us to understand the administration’s position; it is a matter of administrative negligence,” they said in an email. The student government is also supporting the coalition and wrote a letter to school administration in response.

Victoria Vong, a first-year student at the university, says that the school sold her an experience based on racial inclusion and acceptance. But her experience has been far from it. She expresses that she felt mentally and emotionally damaged by professors who talked down to her—and then failed to acknowledge her concerns when she approached them about it.

Matteo Ricci College hosts a poverty education center and is known for emphasizing social justice issues, but, to many, complaints about racism have long been muffled.

“At 17, I didn’t know people said these things about [Seattle University] and [Matteo Ricci College],” Vong says. “I believed in the marketing.”

The coalition’s struggle is reminiscent of other protests around the country against systemic racism on college campuses, notably at Yale, Ithaca College, the University of Missouri, and the University of Washington, where students protested just last week. Many of the students involved on those campuses have stood in solidarity with the Seattle University students, offering words of encouragement, books, and strategies to stage successful demonstrations.

The MRC Student Coalition says it will stop at nothing short of victory. For its student members, that doesn’t just mean the resignation of Kelly but also an awakening in all students, regardless of race, to the plight of those marginalized on college campuses across the country.

For them, occupation is the only way.