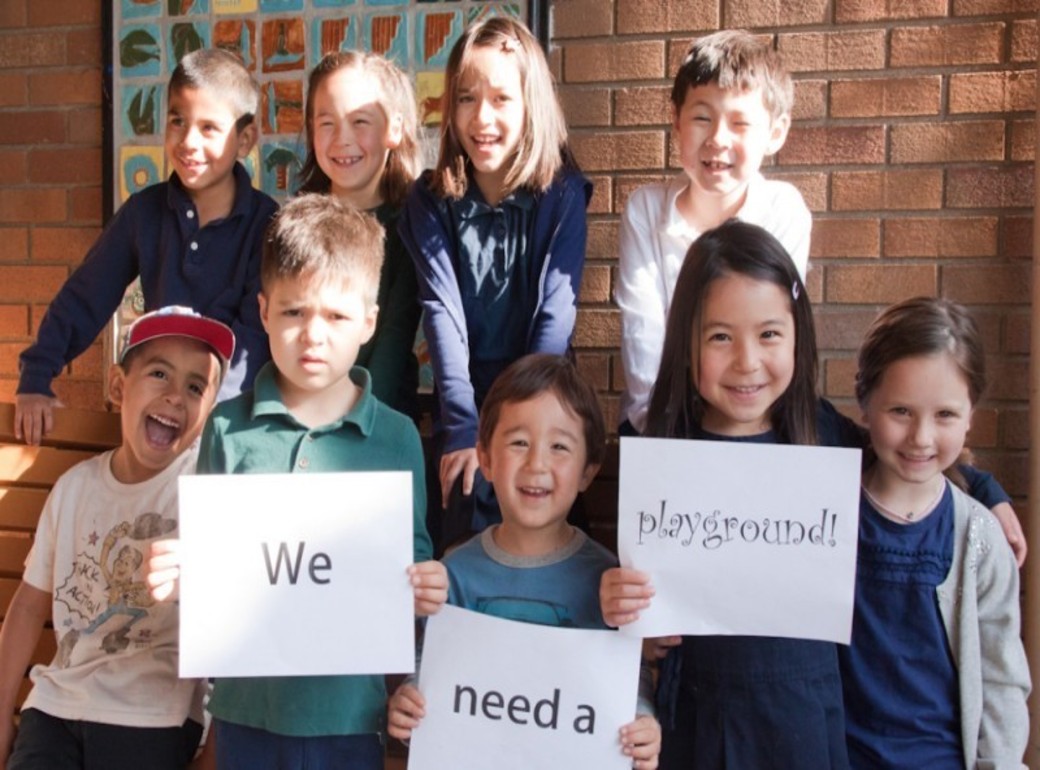 It’s no surprise to anyone that our public schools are under-funded.  We see this reflected in everything from a lack of teachers to a lack of supplies in the classroom.  At Beacon Hill International School, where both my daughters attend, we see it the empty space where a play structure used to be.

At over 40 years old, with rusted metal, splintery wood and decaying plastic, our play structure was well past its prime.  Last month, the structure was condemned by school officials.  The rust and deterioration had become a safety hazard and so it was removed – leaving us with a blank expanse of wood chips surrounded by concrete.

Everyone I talked to at BHIS misses the play structure.  Mira, a 3rd-grader at Beacon Hill told me the playground now feels empty.  “It’s too much open space,” she says.  And even though the students say the empty bark is fun to dig in, another 3rd-grader sees it is also dangerous.  “When you run through there are holes and you can fall,” he wisely noted.  Without the play structure, there just isn’t as much playing for these Beacon Hill students.

“Kids will always find a way to have fun,” BHIS parent Matthew Ringel says.  “Give them a small area of dirt and they’ll play freeze tag or some other creation of pure imagination.  But right now that’s about all they have: an area covered in woodchips, a basketball backboard, and two tether-ball poles without tether-balls.  It’s important that we give them their excitement and joy back.”

Unfortunately, there is no money from the district to replace the play structure.  Which leaves parents and volunteers to raise the $40,000+ needed for a new structure.  This is a lot of money for a state-designated “high poverty” school with 60% of students who qualify for Free and Reduced Lunch.

While schools with wealthier attendance neighborhoods may have no problem raising money to support equipment and programs not covered by the state and district, it is a different story here.  One parent pointed out that this problem is not unique to Beacon Hill International: “It’s especially difficult for our south end schools to come up with funds and volunteers to organize these efforts.”

But despite the difficulty, the Beacon Hill International School community has come together in a big way to build this play structure.  A GoFundMe campaign began last week and already raised 1/3 of the goal, with the overwhelming majority of donations under $100 and many $25 and under.  Additionally, parents and volunteers are applying for a variety of grants.  Students are even kicking in – like BHIS 2nd-grader, Hero, who contributed $20 to the fund direct from her own piggy bank.

Hopes run high for the new structure.  Lina, a 1st-grader at Beacon Hill, suggested trampolines instead of wood chips for the new playground.  If trampolines aren’t safe enough she says she’ll settle for better monkey bars.  A bigger slide and new swings were among the top requests I heard from students, as well as some good hiding places for hide and seek.  Parents have important aspirations for the new equipment too.  Erin Okuno notes that, “…the past playground wasn’t accessible for special needs children.”  She hopes the new structure will be “more inclusive of children with different abilities or who seek different ways to play.”

It is heart-warming to see our extremely diverse BHIS community come together in support of these students.  We’re from all different parts of the world, we speak different languages, eat different foods and worship in different ways but we’re all Beacon Hill Tigers and we all want our kids to be strong and healthy. I can’t say it better than 2nd-grader Hero: “I am a Beacon Hill Tiger and I think we need a new playground and more equipment. Go Beacon Hill!”

*To help us reach our goal and build a place for our community to play, grow and learn, please follow this link and contribute whatever amount you are able.  Your support is appreciated by every Beacon Hill Tiger!

Marilee Jolin is a Beacon Hill resident who writes a regular column for the Emerald.