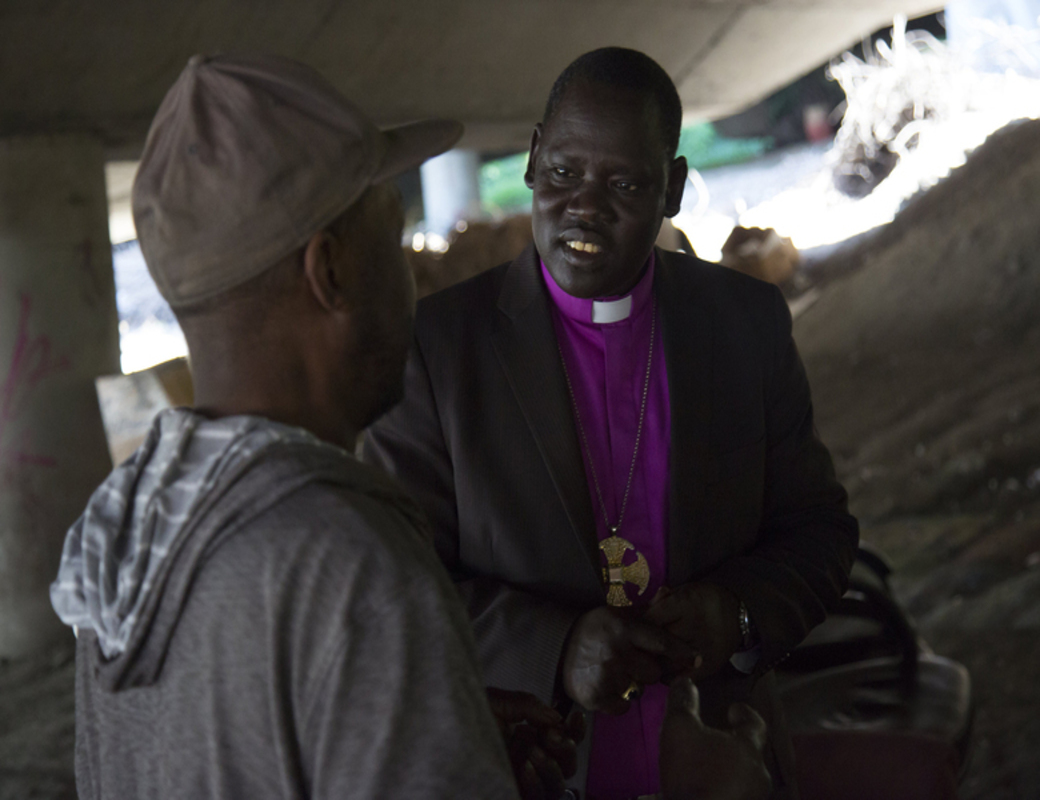 When I first started traveling to poor countries as a young journalist, I was most shocked by the slums. Tarp cities and shantytowns in Asia, Africa and Latin America, often butted up against wealthy neighborhoods and sleek high-rises, stood out as symbols of the distance between the United States and the “Developing World.”

But that distance has shrunk in Seattle. Yes, we’ve had a large homeless population here for as long as I can remember. But the now-ubiquitous knots of tents on traffic medians, the appearance of homeless encampments in neighborhoods and the growth of The Jungle under Interstate 5 have shown me our city is not immune to extreme poverty, or outrageous disparity of wealth.

And nothing brought that point home quite like visiting The Jungle earlier this week alongside an Anglican bishop visiting from South Sudan.

“When we’re back in South Sudan, we hear that America is a rich country,” says Bishop David Kuol, who is visiting the U.S. for the first time. “And we didn’t know that there were actually people who would … be homeless.”

He was in Seattle this week meeting some of our region’s South Sudanese residents, estimated at around 1,000, and engaging in a little informal diplomacy.

For the most part, that means meeting with churches, nonprofits, schools and city officials. But the morning I met Kuol, he was standing under a freeway south of downtown Seattle, talking with South Sudanese refugees who have hit on very hard times, very far from home.

“Those under the bridge, most of them are ‘Lost Boys,’ ” says Jok Nhial, an interpreter and executive director of Liliir Education Project, an organization that helps build schools and provides college scholarships back in his home country.

He’s describing the generation of children who became refugees during the Sudanese Civil War in the 1980s through the early 2000s. Both he and Bishop Kuol are Lost Boys themselves.

“A lot of people were overwhelmed by all they were going through,” Nhial says of Lost Boys in the states. He estimates that there are nine South Sudanese living in the Jungle.

“They couldn’t get a job, or if they could get a job, it was just minimum wage. And they were not able to afford to pay for an apartment and support their families back home,” says Nhial. “They ended up on the street, and there was no way to get help.”

The help Bishop Kuol hopes to bring through his visit to The Jungle is largely spiritual.

“I’ve been a refugee, but God called me to the ministry,” says Kuol, who became a priest at 19 after an American he met at a refugee camp in Kenya helped him attend school. “Most of my family was killed … during the war. God opened the way for me.”

A few moments after we arrived at the encampment off Airport Way two men emerged from under the overpass to sit on a concrete barrier under the bright sun with Kuol. The men preferred not to share their names or stories with me — worried about their current employers or family back in South Sudan finding out they are homeless.

But their appreciation of Kuol is evident. He places his hands on their thin shoulders. He listens with his head bent close to their faces. He knows the names of the villages they left behind.

He cuts a dramatic figure in his purple shirt and large golden cross, and others in the encampment are drawn to him. They share stories of Seattle’s inadequate shelters, brutal muggings they’ve suffered and the endless search for affordable housing.

Kuol seems at ease. And I’m struck that these scenes — of pallet beds with shoes lined neatly underneath and the remains of last night’s fire surrounded by discarded office chairs — might not be out of place in the camps he knew as a child.

The visit ends in prayer. A small group of men from around the world, their arms linked and heads bowed. The freeway overhead obscures their words, but the message is clear: We may come from very different places, but our hardship is shared.

Featured Image: Rt. Rev. Bishop David Kuol of the Awerial Diocese of South Sudan talks with a resident of the Jungle encampment underneath Interstate 5 in Seattle, Tuesday, May 31, 2016. The Reverend is touring the United States and visiting with Sudanese who have resettled