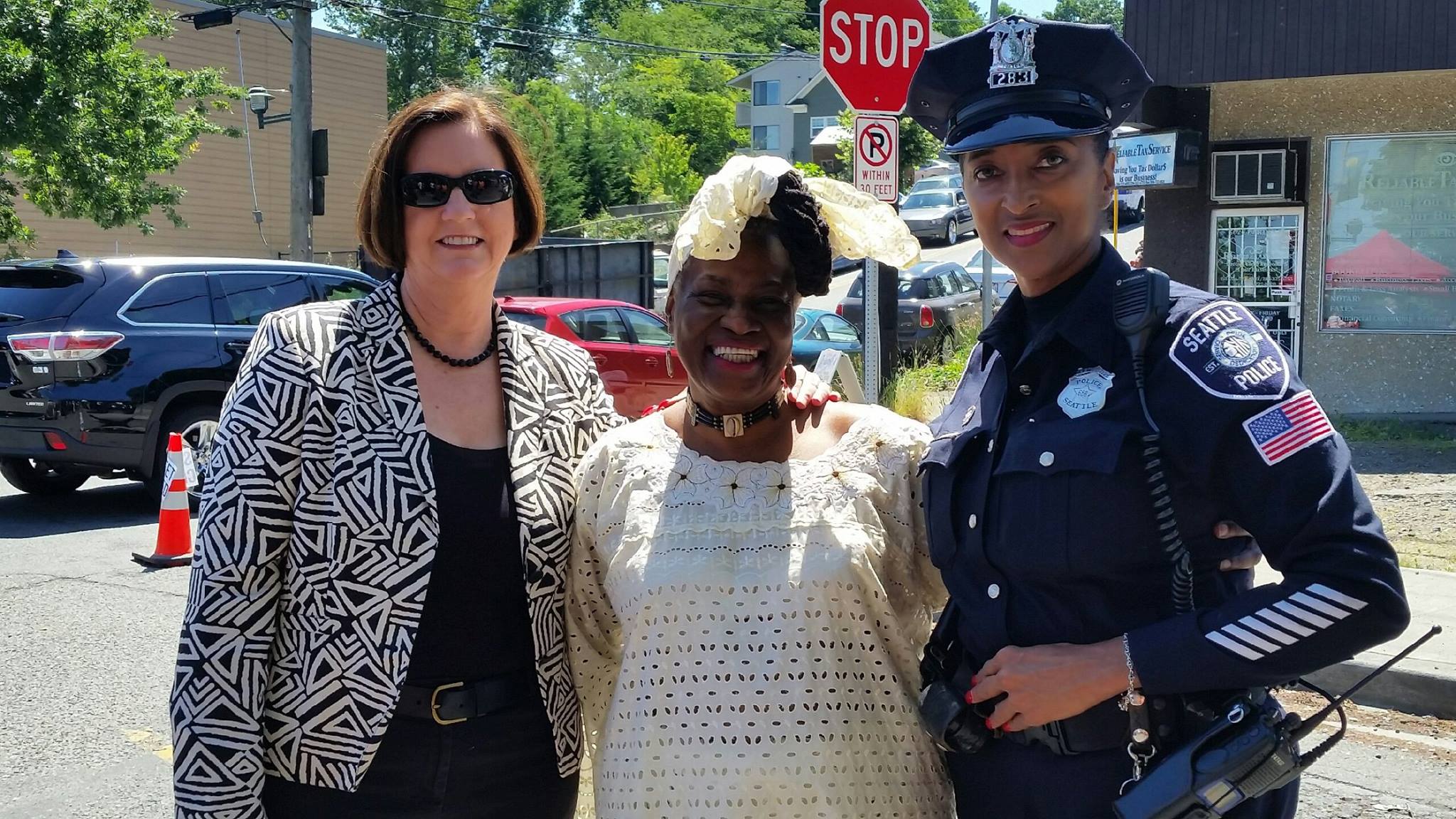 It was billed as a ceremony for a King and Queen, but ultimately it was a detective who was celebrated as royalty.

On a spectacularly sunny Saturday afternoon, more than one hundred people, including Seattle Mayor Ed Murray, Seattle Police Chief Kathleen O’Toole and Miss Black Washington, gathered in the Rainier Beach neighborhood for a dedication of public art pieces, “The King and Queen of Rainier Beach,” two over-size, stylized chess pieces from the classic game, and to honor Detective Denise “Cookie” Bouldin, whose work in the community with her youth chess clubs inspired their creation. The pieces, which feature a light sensitive solar powered LED system that illuminates the sculptures with a purple hue at night time, tower nine feet above the intersection of Rainier Avenue South, South Barton Place and 51st Avenue South in Rainier Beach Square.

“This is so well deserved for Detective Cookie. My son began doing her chess club at 10 years old, after he started getting into trouble,” said Moira Jones of Rainier Beach before the dedication ceremony got underway. “He really just took off in life after he started going, and started doing the tournaments. So the chess club has been a blessing for both of us.”

DJ Jade blasted the Will Smith classic “Summertime” as Jones joined several in attendance on the gorgeous day in celebrating the dedication of the sculpture in honor of the Seattle Police Detective who has hosted afternoon chess clubs for youth at the Rainier Beach Library and Community Center for more than a decade.

“I think this is a beautiful occasion. I’m so thrilled to see her getting the recognition for how she’s changed not just Rainier Beach and not just Seattle, but the whole world with her wonderful chess club,” said “Granny Kate”, as young children learned to play with community plastic chess pieces taller than most of them at the “Detective Cookie Giant Pop-Up Chess Park,” dedicated a year ago by the Rainier Beach Merchants Association with the help of a Department of Neighborhoods grant. This effort, in addition to the placement of the King & Queen of Rainier Beach sculpture, have encouraged a group of locals to obtain a grant to create a permanent chess park on the location in honor of Detective Cookie.

Detective Cookie’s chess clubs have served as more than just an after school activity, they’ve also served as a unifying force within the community.

“Chess is such a universal thing. There are so many ethnicities in the 98118 area code that it’s not always easy to communicate with everyone, but with chess all you need to know is the rules and then go and play. I’ve met so many friends and grown closer to so many people even though I don’t speak their language because of the game,” said local business owner Joseph Irving, who is a Rainier Beach Merchants member, and co-organizer of the event.

Irving, who has operated his barbershop in the area for the past eleven years, was instrumental in getting the city to close the street for the day along Rainier Ave S and 51st Ave for the ceremony.  The act was only the latest in a show of community support for the Detective and the public artwork project.

Neighborhood residents, lead by Rainier Beach Merchants Association and the Friends of Detective Cookie Chess Park lobbied the Seattle Department of Transportation (SDOT) to fund the King and Queen of Rainier Beach as a part of the “Move Seattle” levy and Safe Routes to School’s Programs, which allocated money for improvements including lighting to enhance community safety. In April SDOT says they installed a new curb bulb and pedestrian island, along with oversized chess sculptures in hopes of making the public plot along Rainier Avenue known as Barton Place a more walkable pathway.

As young children raced around the closed off street playing tag, young couples clasped hands and basked in the sunlight, and pre-teens locked themselves in winner take all chess matches. What was once just an overlooked grassy plot with nothing of note except an uncovered metro bus stop near it, now seemed to be a hit with locals.

Of course, what may now someday become the Detective Cookie Chess park might not have happened if not for the inspiration of the day’s honoree.

“This is an outstanding tribute that will outlast all of us,” said South Precinct Captain Mike Washburn. Washburn added that it was great to see the community engaging with law enforcement in such a positive way, especially as there continues to be room for improvement in the relationship between SPD and some within the community who still view the department skeptically.

Seattle Police Chief Kathleen O’Toole echoed the sentiment and said that Detective Cookie has served as a glowing model of what effective community policing can look like.

“Enforcement should be a small part of what we do. There’s nothing more important than skill-building programs for young people. As a community we all need to put our arms around these young kids and give them opportunities to have recreational programs. There’s no better crime prevention strategy than ones like Detective Cookie has,” said O’Toole, moments before the start of the ceremony.

The dedication got underway a little after 12:30pm when Mayor Murray stepped up to the podium just in front of the King and Queen Sculptures. The visit was the Mayor’s second in a week after speaking at a press conference Thursday to unveil his proposal for a Gunshot Locator System.

“Let me bring Detective Cookie up so I can embarrass her,” said Murray, to applause from an audience that included both residents and several of the Detective’s SPD colleagues who were dressed in full uniform. After the mayor’s remarks a succession of speakers came to the podium to speak about both Detective Cookie and what her presence meant to the Rainier Beach area.

King & Queen of Rainier Beach artist Peter Reiquam took the podium in the middle of the program. Over a year ago, his initial design concepts fell flat with community members who indicated strongly that they wanted art that reflected Rainier Beach community values. Reiquam spent the spring of 2015 seeking extensive input from the community to arrive at the idea for the King and Queen. “When I asked people what was the most special thing about Rainier Beach it didn’t take long for people to say Detective Cookie,” said Reiquam, a South Seattle based artist.

After about a half hour of testimonials from speakers as to what she meant to the community, Detective Cookie finally stepped to the podium to speak. She got out barely one sentence before she had to fight back tears, composing herself while the gathered crowd cheered her.

She then talked about the origins of her chess club, and how it would have folded years ago had it not been for the financial and vocal support of parents and kids within in the community. She then spoke about how her club had helped children become better at a more important activity than chess, the game of life.

“I remember when I used to ask kids why they didn’t play chess, and they said I’m not smart enough, or it isn’t for black people. But as they actually played they would say, ‘Wow! I can do it and I am smart’,” she said.

She then spoke about how many of the kids in the early days of her program had become used to seeing shootings and dead bodies, and that the success of her chess club and change in mindset of many of the participants was a testament to a community refusing to accept bad elements.

“Chess is the sport of the mind, and the chessboard is a tool for anti-violence. It teaches that you can make bad mistakes when you’re not thinking. On the chess board you lose your king and queen, but in the real world you can lose your life. Our children are our Kings and Queens.”

With her speech concluded the crowd clapped profusely and cheered for the detective, as she broke into a smile nearly as radiant as the sun shining down that teased a dazzling summer ahead.

Residents then rushed to take pictures with the detective in front of the King and Queen sculptures that may have stood taller than her, but on this day, could not manage to outshine her.

3 thoughts on “Queen For a Day: Local Detective Celebrated at Chess Sculpture Dedication”