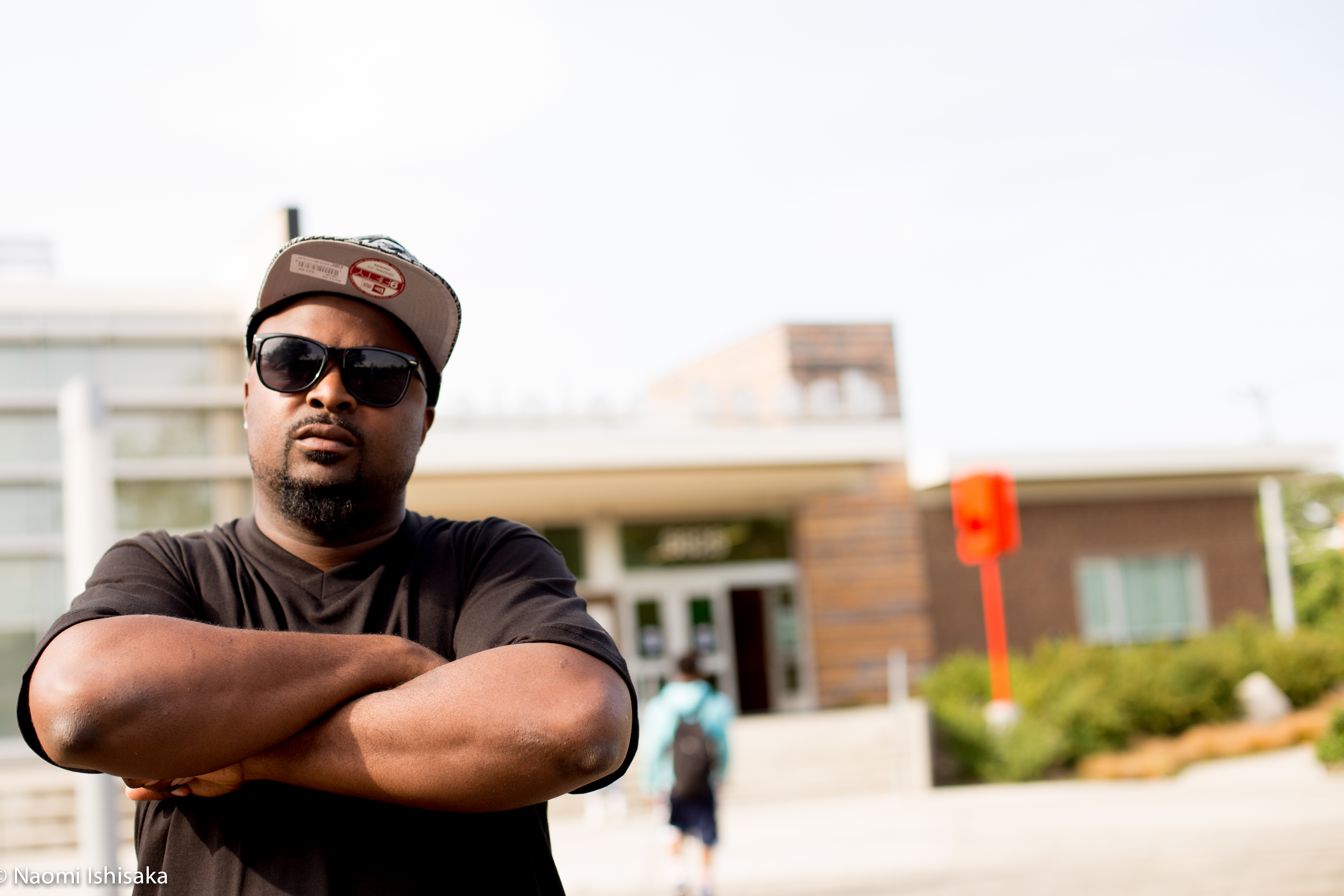 A police officer drives down the lane of a hardwood court only to dish off a pass to a South Seattle teen standing right underneath the basket for layup in a 5 on 5 game of basketball.  A “Bernie Bro” from Fremont and a Hillary Clinton backer from Seward Park share laughs over plates of barbecue wings, and elementary students longing for summer vacation lock themselves in fierce concentration to solve math puzzles their peers helped create.  Neighborhood organizations joining forces to put on a successful community gathering with each rushing to heap praise on one another as opposed to taking sole credit for the outcome.

This idyllic picture is one painted by Cortez Charles while on his lunch break from manning the front desk at the Rainier Beach Community Center. He envisions the scenes as those transpiring inside it come Saturday morning when the inaugural Peace Festival takes place.

Part resource fair, part local arts showcase, part community barbecue, and part bridging device between police officers and community members, the festival is all community driven, and an opportunity for it to heal together after a spate of gun violence in recent months. Just as importantly, it’s a chance for residents across Seattle from Magnolia to Skyway to share in some fun, says Charles.

He knows some might find his vision unlikely, but then again, according to him, the 33-year-old is one of the most unlikeliest of people to be playing a role as one of the festival’s architects.

Growing up on 38th and Genesee, the lifelong South Seattle resident had a fairly rough childhood. Bouncing from school to school after successive expulsions, he turned to street life, engaging in drug selling, gun violence, and aligning himself with local Crips.

“My mom would always say, ‘why do you have to be so criminally minded?” says Charles, who now has three children of his own. His wife Deandra, who he credits with being the main anchor of support in his life, is expecting their fourth child in a couple months.

Cortez says he was only able to escape the mentality that once possessed him after having one too many experiences of having gunfire evade him while being directly in its cross hairs. Experiences he says woke him up to the fact that it was time to leave his chosen lifestyle.

“What triggered that change in me was someone saying: ‘if you ever get a conscience about the things you’re doing out here [in the streets] then it’s time to change what you’re doing’.”

Now a changed man with a conscience, he says it has been extremely difficult to forgive himself for the time he spent tearing down the South End community in his youth. His past still eats at him from time to time.

Over the past nine years, internal healing has come from working directly with troubled young people at nearly every major youth organization based in the South End as a program coordinator or mentor, including the Urban Family Center and The Safe Passage Program.

One of his jobs is now as a front desk attendant at the Rainier Beach Community Center, where he interacts daily with youth, as well as local police officers. This sparked the idea to make it as much about healing the schism between the two groups in the South End as anything else, by having a basketball game between law enforcement and community members.

Charles understands if this puts off many in the community, especially many in the city’s Black community with an inclination to distrust police, citing the recent killing of Che Taylor, a black male killed by two police officers in North Seattle.

He himself used to be deeply mistrustful of SPD.

“I remember when my son was four years old. A police officer tried to give him a sticker and I snatched my son away and told him: We don’t like police and we don’t take stickers from them,” he says.

While some initially balked at the idea of inviting police to participate in the festivities, Cortez says he was inspired to include them after speaking to an officer whose home was rattled with bullets while the officer and his children where inside.

“He had to get on all fours and get to his kids. At that moment I just visualized as a parent him getting out of his bed to go shelter his family and his house is being shot up.  I didn’t look at the badge. I understood there was a heart beating underneath it.”

Part of the idea behind inviting police officers is for them to also get an understanding that there is a human heart beating inside all of the community youth who will be in attendance, and they should be viewed as such.

“I feel like it’s necessary because I remember growing up and seeing police officers patrol my neighborhood and they would always look at me like I was doing something wrong, whether I was or not.” says Tre Owes, who alongside Charles, is a member of TOKEN (Teaching Our Kids to Educate the Next), the volunteer organization of South Seattle residents responsible for the festival.

“Instead of cops saying, “You’re just a young youth, ripping around, running the streets, or youth saying, oh you’re a cop. We want people to say, ‘oh that’s Mr. Johnson, he’s a cop’, or ‘oh that’s Johnnie and he’s a student.” Says Owes.

Cortez, who is as humble individually as he is passionate about his community, says that though he’s gotten a great deal of attention for the festival it would not have materialized without members of TOKEN, including Owens, Glenn Watson – the TOKEN member who came up with the name of the festival – and several South Seattle based organizations and youth who took ownership of planning the event.

“We just all came together because we had the same vision and the same way we work with kids, and we just felt like the peace festival was really necessary with the community. There’s been a lot going on, you see on social media, and with law enforcement, especially with people of color,” says Allie Steinberg, a South End Native and member of TOKEN.

“We really hope this is the beginning of bridging the gap between law enforcement and the Black community,” says Charles Sampson of non-profit Jacob’s Ladder, who also helped in the planning.

As planning for the event began in April, the group purposely bypassed funds and resources from both the city and the county, and the bureaucracy that often comes with them. Instead, they relied on local businesses and artists for food and entertainment, making it a fully community-funded event.

“The community leaders have definitely been on board because of why we’re doing the event and the messages we are sending out – this is something we need to be a part of and I’d love to be a part of it.  Rainier Beach Safeway gave us a nice size gift certificate for food, and Catfish Corner is donating food to feed a ton of people,” says Charles.

The group also sees the festival as a deterrent to gun violence. Even with overall crime in the area down for the year, there have been 96 incidents in the South Precinct during the first quarter of the year where a gun was involved according to Sea Stat Crime Data.

The relationship building offered by the event is key to reducing that statistic says Charles, one he knows has a tendency to pick up during the summertime.

“I just want every individual that comes to that Peace Festival to leave with a different mindset. I want them to be able to help one another, and empower one another. Sometimes we have to take accountability for us.  I am from the South End.  I was raised in the South End. The lessons I learned about life that guide me now I learned from this community, and that’s what we’ll be imparting on these kids this Saturday,” he says.

Myron Leffall, who taught Charles as a high school freshman for a 3-week stint after Cortez was sent to a now defunct South End alternative school, says those lessons are ones he’s proud to see that Cortez has absorbed.

“I was telling people before I got back in touch with him that if there was one youth who I didn’t have any impact on at the time, I worked with him. It was Cortez. I’m just blown away by what he’s doing now,” says Leffall, who runs the program Guiding Academic Motivation for Excellence (GAME).

Charles has also impressed more recent mentors, including Amir Islam of the United Hood Movement, the Black Liberation organization composed of many former gang members. Charles was one of the Movement’s initial members.

“Cortez will call me up in the middle of the night with some idea about improving the community.  I’m proud of him. We have so many people in this city who are taking things into their own hands to make things right. They’re coming and coming to stay, and Cortez is one of those ones. He’s a keeper of the flame,” says Islam.

Still Charles takes everything in stride, preferring to deflect most attention he receives to others. “This festival isn’t about one organization or one person, this is about a collaboration of everybody coming together for one common goal, to make a better community,” he says.

Stressing that the event will not be a one-off, he says it is the beginning of a series of events including Thanksgiving Turkey Bowl Football Games, Resource Fairs, and Cooperative Economics Workshops that are community led.

When asked if he could have possibly seen himself helping to lead an event like the one on Saturday just ten years ago, he responds bluntly:

“Hell no, man! I know my mom is in heaven and she is smiling. I’m here and I’m humble and I’m happy and I want to be able to continue to do more and more to eventually one day be a pillar in this community. When I die and leave this earth and I leave this world I don’t want those old memories of me or those old stories of me. I want my son and daughters to be able to say my dad helped turn this community around. That on this day he did this with a host of community partners and a host of positive youth that are going to volunteer to help make this thing happen. That’s where I am in life man and that’s where I am finding the most peace in life.”

He then gets up from the lobby table to head back to his post at the front desk. Kids come up to him in succession to discuss everything from the performance NBA player Stephen Curry had last night, to what they can expect to take place at the Peace Festival.

Break’s over, there remains work to do.