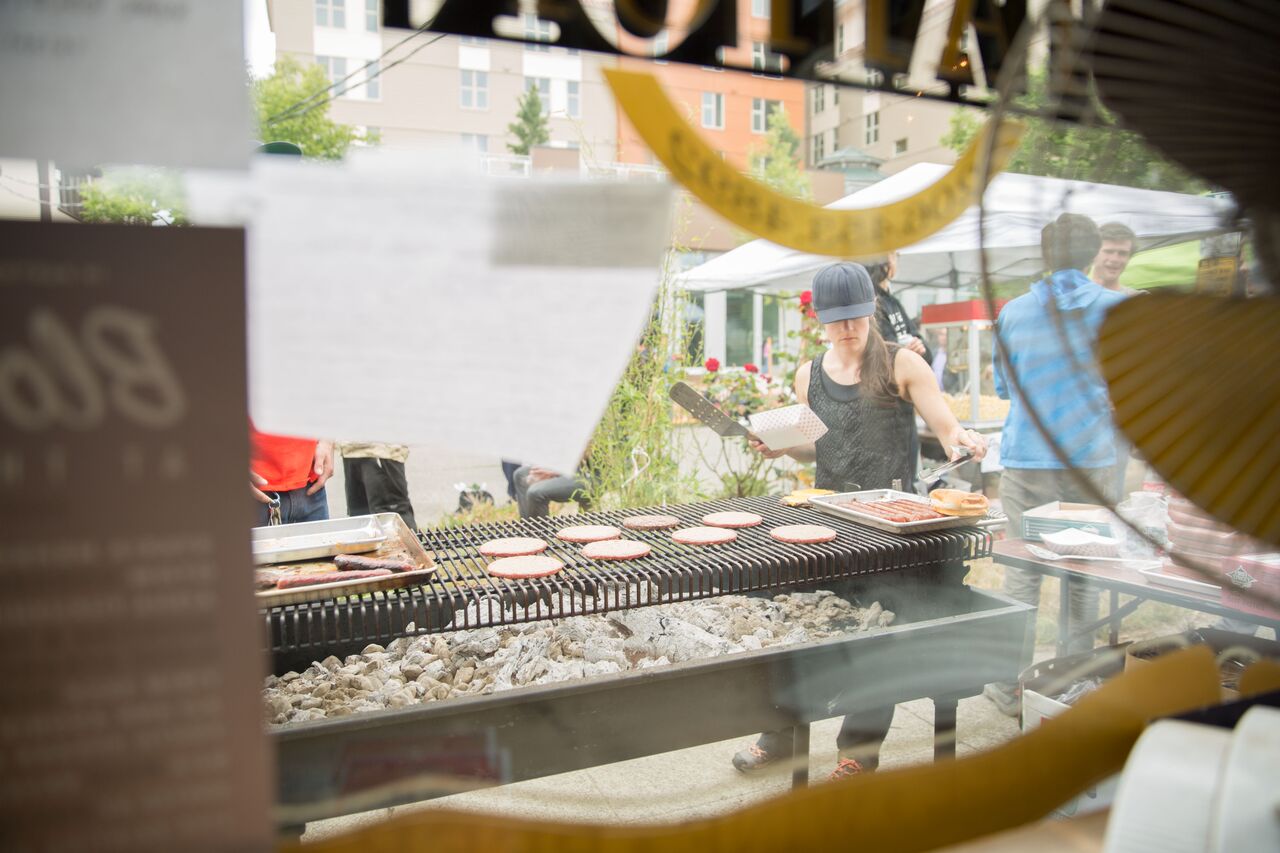 You’ve probably heard about The Beacon Hill Block Party that happened two weekends ago.  Our neighborhood’s free summer music festival, created and organized by The Station café on Beacon Hill, has gotten a lot of media attention.  With coverage from The Weekly, The Stranger, The Globalist and, of course, The Emerald, The Station is basking in its “2 or 3 seconds of fame” as owner and Block Party organizer Luis Rodriguez calls it.

These publications are interested for good reason.  The Block Party has grown exponentially (boasting over 1,000 attendees this year), is uniquely accessible (no admission fee), unapologetically POC/LGBTQ-centered and unafraid of a little controversy (if you missed it, there was a little kerfluffle with the Mayor’s office).

What you may not have heard is the story behind Block Party at The Station – namely, The Station café itself and its essential place in the Beacon Hill community.

It’s pretty clear, the instant you walk into The Station, that you’re not in a “normal” coffee shop.  You might first notice the stickers on the coffee grinder decrying big banks and police brutality or the current art on the walls, sometimes innocuous, but many times making a powerful activist statement (like Alex Garland’s recent photography show, composed of images of Black Lives Matter Protests over the course of a year).  Next, you might become aware of how friendly everyone is – as though the clientele knows and likes each other; conversation passing between tables, barbs and laughter sailing across the counter, hugs at greeting and goodbye.  You also may realize that there’s a high concentration of People of Color – well beyond the numbers you’d expect from 70 percent White Seattle.

And if all this leads you to think you’ve stumbled upon an epicenter of community engagement and activism for People of Color in a rapidly-gentrifying and Whitening Seattle – you’d be right on.

Since its inception, The Station has been a magnet for artists, musicians, educators and activists – many People of Color – a characteristic established and maintained by the “Owners of Color” Luis and Leona Rodriguez.  And, yes, the people who compose this eclectic, vibrant little community like each other and have a lot to say to one another.  This isn’t a coffee shop to sit in silence and stare at your device.  It’s a place to connect with others and, hopefully, learn a thing or two.

Long-time Station barista Waylon Dungan (Dj WD4D) says there is “a freedom [at The Station] for those who are too often silenced, to speak their mind and discuss amongst other patrons (often total strangers) rather than keeping to themselves on their devices or work.”

Gabriel Teodros, prominent Seattle hip hop artist, Block Party Organizer and loyal Station customer adds, “[The Station is] a place where people come together. People can have real conversations. People can offend each other and still be cool with each other.”

Additionally, The Station is intentionally welcoming of those who may not have the funds to pay for their coffee every day.  Dungan sees The Station as “more of an ally to the homeless/underserved populations than many other businesses around…It doesn’t always have to be, ‘buy something, or leave.’”

It didn’t come to be this way by accident.  Rodriguez has intentionally created a family-like environment based on much more than an exchange of money for mochas.  According to Rodriguez: “You’re not going to come as a young, black, transgender, homeless person to my place and [have me] take your money every day, or once a week, and pretend like I don’t care about you but only about your money.”

In caring about their clientele – turning clientele into friends – The Station has become not just a safe space but also an activist space.  In seeing themselves as “a voice for those who don’t have a voice” Rodriguez does not shy away from topics often avoided in polite company such as White privilege, racism and gentrification.  Some customers have been offended by his unapologetic attitude and eagerness to discuss sensitive topics but Luis maintains that such conversations are an issue of integrity; not pandering to capitalism or trying to avoid discomfort but instead “walking the walk” of what he believes.

And, anyway, he is pretty certain it has not hurt business.  “Oh, no!” Rodriguez bursts out, when I ask if he’s lost a lot of customers from his approach.  “Not at all! I think that if anything people are supporting us and loving us even more.”

Dungan affirms: “The Station…[is] a favorite meeting place for our neighborhoods’ artists, activists and educators.  Not to mention other local business owners.”  Teodros agrees, noting that The Station is loyally supported by hip hop artists, People of Color and activists.  “We only really exist in high numbers in a few neighborhoods so when there is a small business that is welcoming to hip hop artists [and People of Color]…it becomes a spot real quick.”

From this POC-owned, LGBTQ-welcoming space, The Block Party evolved naturally.  Indeed, the family-centered, community-oriented party was in the Station’s lifeblood right from the beginning: their Grand Opening in 2010 was a BBQ with music, food and community.

The tradition continued annually – and grew to become The Block Party – taking a major leap forward 2 years ago when Matt ‘Spekulation’ Watson and Gabriel Teodros came on board to help Rodriguez plan and organize the event.  Spek and Gabe, both powerhouses in the Seattle hip hop community, met and connected at The Station by “shooting the shit” over music and coffee.

For them, the Block Party music – all hip hop, all local – is about more than just entertainment.  “Music brings people together,” Teodros muses.  Ultimately, he says, “that’s all community organizing is – it’s trying to bring people together around a common cause.”  And he adds that no social movement in history has taken place without music.

It is also important to Teodros who is up on stage.  “Last year there were not enough young people, not enough women [on the Block Party stage],” he says.  But this year they got it right with a female-heavy bill and the two main headliners both Black, Queer women.  Unlike most hip hop shows, which do not have “a balanced inclusion of women” Teodros is proud that The Block Party offered “a more accurate depiction of humanity.”

In a few months, The Station will briefly close to make the move across the street to their new home in the Plaza Roberto Maestras – a newly constructed building next to El Centro de la Raza dubbed “The Beloved Community”.  The Plaza, funded and built by El Centro, will be a mixed-use, affordable housing complex boasting 112 one – three bedroom units that are affordable for families making 30 – 60% of Seattle’s median income.

For Rodriguez, the move is an opportunity to cement The Station’s important place in the community.  “I signed a 15-year lease to be a part of Beacon Hill,” he exclaims, when I ask how The Station fights gentrification.  “So, I’m here for 15 years,” he goes on. “And I’m hiring Brown.”  He’s not sure if it’s possibly to successfully fight gentrification but, by maintaining The Station as a POC, community-activism coffee shop, The Station is giving it a shot.  Without which, Rodriguez says, Beacon Hill would be a whole lot Whiter.

Come to Block Party next year.  It promises to be even better than this year.  But in the meantime, stop by The Station for an excellent cup of coffee and a moment of connection over things that matter.  Because the magic only continues if we all take part.  As Rodriguez concludes, “The station is not me, the Station is all of us.  Everybody that comes to The Station – they are all a part of this community.”

Marilee Join is a resident of Beacon Hill. She writes a regular column for the Emerald

One thought on “Beyond the Block Party: Beacon Hill Coffee Shop Is Catalyst for Social Change”