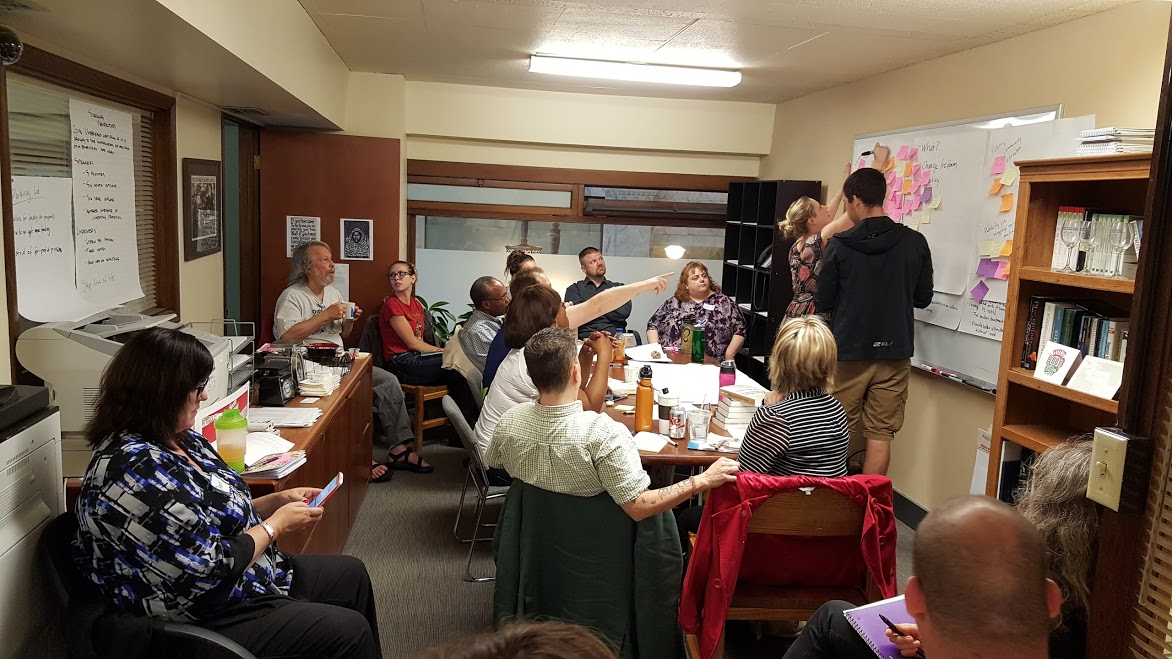 “There’s too many people dying,” said Ari Kohn, the director of the Post-Prison Education Program (PPEP).

Over the past couple of years, the Center for Disease Control has noted dramatic increases in deaths caused by overdosing with both illegal and prescribed opioids and heroin. Opioids can include things like oxycodone, hydrocodone, and methadone. More people died from overdoses in 2014 than any year on record for the U.S. Heroin deaths also spiked in 2014 for Seattle specifically.

To try and solve the issue of drug addiction and how the system handles those who are addicted, approximately 15 people hashed out solutions Thursday over the course of seven and a half hours.

Google, Inc. facilitators Sarah Carr and Sam McVeety, along with people from all walks of life discussed what solutions would work best to fix the systemic and social barricades addicts face in Washington state.

“I don’t know how to get out,” Adrian Tunney cried as she relayed her lifelong struggles of drug addiction.

She was one of many in the room who has been tossed back and forth in Washington’s programs and systems, unable to have enough stability in her life to remain sober.

All attendees faced or knew someone who faced the cyclical repercussions of jail time, being barred from housing and jobs as a result, unable to access some of Washington’s best programs because of need-based and high-risk qualifications as well as background limitations, and then the relatively understandable inability to stay sober under such strenuous conditions. Not to mention the frequented situations of homelessness and diagnosed mental illness being thrown in the mix.

Kevin Allen, a man who had also faced addiction and long lengths of incarceration, asked how to change the mindset from drugs to life. It was a consensus that, when on drugs, that’s all that matters, the drive is completely centered on “obtaining the high” or “being in the high.” Life doesn’t even matter.

“We need to go to the addict,” said Allen, who has been sober for more than twenty years, “the addict shouldn’t come to us; instead of the get-well-and-we’ll-help model.”

Kohn said the key, when finally finding and reaching those in need, is to meet their legitimate needs, where they are in life — something PPEP does.

“We know it works,” he argued.

The University of Washington studied PPEP in 2009, and those researchers found that the program’s recidivism rate (the rate at which people who go to jail end up going back to jail after release) was zero percent, although one of the lead researchers called the numbers preliminary. PPEP’s website says their current recidivism rate is less than two percent.

Keep in mind, these are statistics which completely juxtapose the state’s recidivism rate which was 27.8 percent during the timeframe of 2009, upon initial release, to 2013.

Gina McConnell-Otten is someone who’s worked at PPEP for four years, and has quite an inspiring story of her own. But she is still getting over the death of one of “her twins,” as she calls them: Two sisters, twins, came to McConnell-Otten asking for help because they were both homeless and addicted. One of them was unwilling to get medical help for a leg infection because of her previous experiences of being treated poorly at a Cowlitz County hospital. She was also disabled. The woman ended up dying because of an overdose while she had her untreated leg infection.

For McConnell-Otten, the highest barrier for systemic change is the social stigma attached with craving help to fight an addiction.

“Society views asking for help as a weakness,” she said, adding how people refuse to look at the context of someone’s situation and choose to blame a person for what they’re dealing with rather than treating them like another human being or believing they deserve help.

With only an hour left — and with the incredible guidance of Carr and McVeety — everybody finally settled on two topics to utilize for systemic change: Networking and coalition-building, and policy-making.

One idea around networking was creating one-minute videos for those recently released from prison so they could better use current technology, and be reintroduced to simple tasks such as grocery shopping, applying for cards, etc. Another was for those either struggling with or who have overcome addictions to share stories and hold forums.

When it came to spurring systemic change through policy, the consensus was to vote and  be aware of who was running for local office. Getting involved with the system by writing letters, being present for public testimony when legislation is up for consideration, and interacting with those in charge of various addiction programs were also discussed.

Many also wanted to turn the way Washington state routinely handles those with addiction struggles into a campaign issue, reaching out to large groups with a lot of influence to ask specific questions around the topic to candidates. It was also proposed that bills be put into motion to reallocate funds given to programs with bad reviews and poor statistics over to programs that are proven to work. The language for this would be “evidence-based” and “fiscally responsible.”

Ideally, all those at the meeting wanted there to actually be a mandate, and not a recommendation, for those with substance, mental health, and co-occurring disorders to complete these evidence-based treatments when in custody (which includes when being on probation).

Six month goals were created so as to be in tandem with the next legislative session.

Kelsey Hamlin is an intern with South Seattle Emerald this summer, and has worked with various Seattle publications. Currently, Hamlin is the President of the UW Chapter’s Society of Professional Journalists, and will be starting an internship with KCTS 9 in July. She finished an internship with The Seattle Times in March as an Olympia legislative reporter, and is a journalism major at the University of Washington, planning to double-major in Law, Societies & Justice (currently her minor). See her other work here, or find her on twitter @ItsKelseyHamlin.