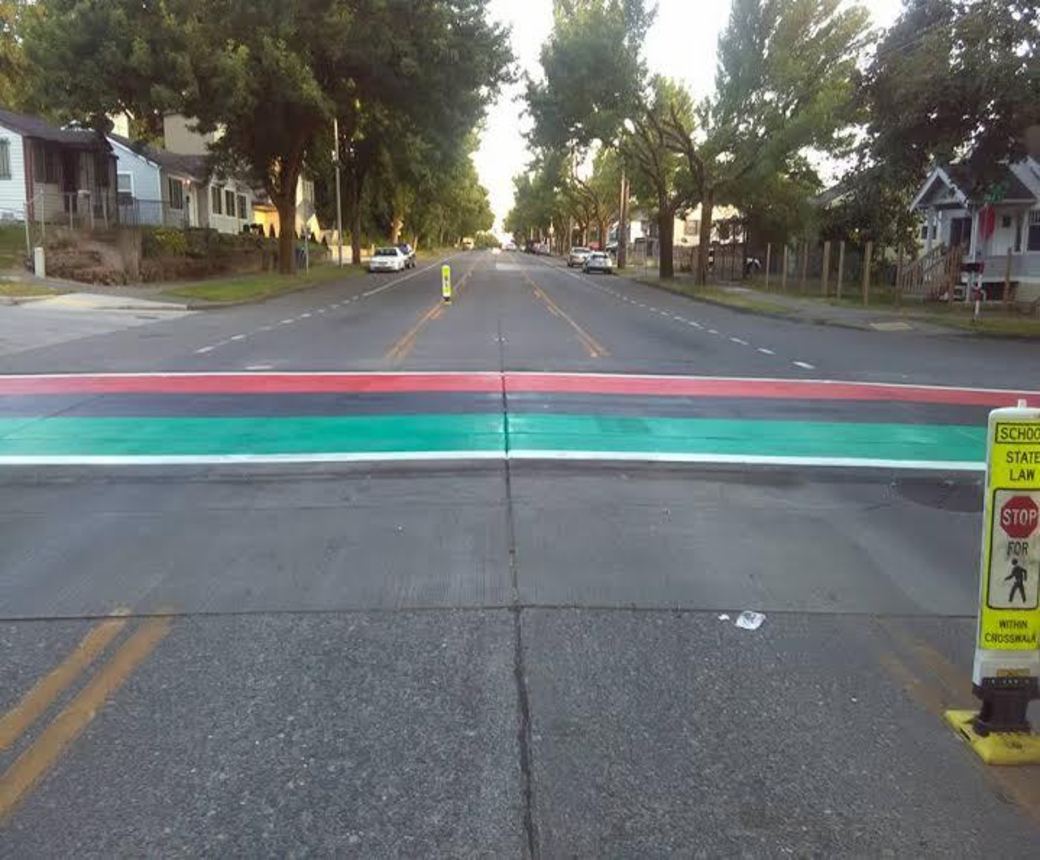 Last summer, a Central District based group of former and current gang members, collectively known as the United Hood Movement, gained attention for their response to the City’s painting of crosswalks on Capitol Hill. The group covered four crosswalks throughout their neighborhood with red, black, and green paint— paying homage to the Pan-African Flag, which serves as a symbol of pride, empowerment, and black liberation for many within the African American community.

The efforts of the community activists were eventually recognized by the City, who shortly after worked with the group to establish a formal crosswalk installation in the CD.

Now, almost a year later, there are plans to paint eleven crosswalks by mid-July, as a part of a larger movement entitled RBG the CD. You can see the most recent installations on 22nd and Jackson and 14th and Yesler, where the colors of the Pan-African flag lay powerfully against the bare concrete; red representing the bloodshed, black representing the people, and green representing the land.

Angel Mitchell, a community organizer and activist who helped lead the project, recognized the importance of the crosswalks as a part of the Central District’s history.

“The crosswalks are an opportunity for all of us to have the conversation about this community’s history and the decisions that changed its course.” She added that the crosswalks are,“also an opportunity to recognize, challenge and eliminate the biases and internalized thoughts that influence these choices.”

Angel is a member of the newly created Central Area Arts & Cultural District, a program, “Dedicated to nurturing and protecting the presence of arts and culture in neighborhoods.” The program was piloted in Capitol Hill, and then expanded to the “Central Area” in December 2015 with the main goals of preserving African and African-American legacies, sustaining physical identity and senses of place for cultural relevancy, and establishing support for artistic creation, as noted on their website.

For Angel, RBG the CD’s aim is “for the crosswalks to be a piece of ART that will act as a stimulus for the real work, the work each of us has to do within ourselves.”

It’s clear that this initiative within the Central District, while now backed by the City, began at the grassroots level. Far before the Mayor’s Office took steps to orchestrate an official response to the “rogue painting of crosswalks,” the cross walk installations, much like the majority of activism currently taking place within the Central District, was funded and driven by the people.

The City has now created a “toolkit” that outlines ways in which community members from across Seattle can work with the Department of Transportation to organize projects that might bring painted crosswalks or other artistic installations to their own neighborhoods. From the website, it appears as though this application process can be quite arduous, as it could possibly take up to a year for a project to fully develop.

The path to the crosswalk installations in the Central District is important to reflect on, especially as we continue to imagine other neighborhoods around the city receiving installations of their own. How powerful would it be if intersections within Rainier Beach were covered in new paint— resurfacing the streets with a vibrancy and color that actually matched the richness of all who’ve lived in the community for years? RBG the CD reminds us that any change to our streets must be driven first by the work of community members who often aren’t recognized by the city until it’s convenient to do so.

So, as the City continues to roll out the new crosswalks throughout the Central District, we salute Angel Mitchell, the United Hood Movement, and the many other community organizations and individuals who led the original efforts to bring this piece of art into the community, and who continue to fight for the preservation of art, history, and Black culture within the changing CD.

Ellis Simani is an Emerald reporting intern. He  was born and raised in South Seattle, and will be a senior at Claremont McKenna College this fall. Follow him on Twitter @emsimani.

One thought on “The Long Path to a “Red, Black and Green” Central District”