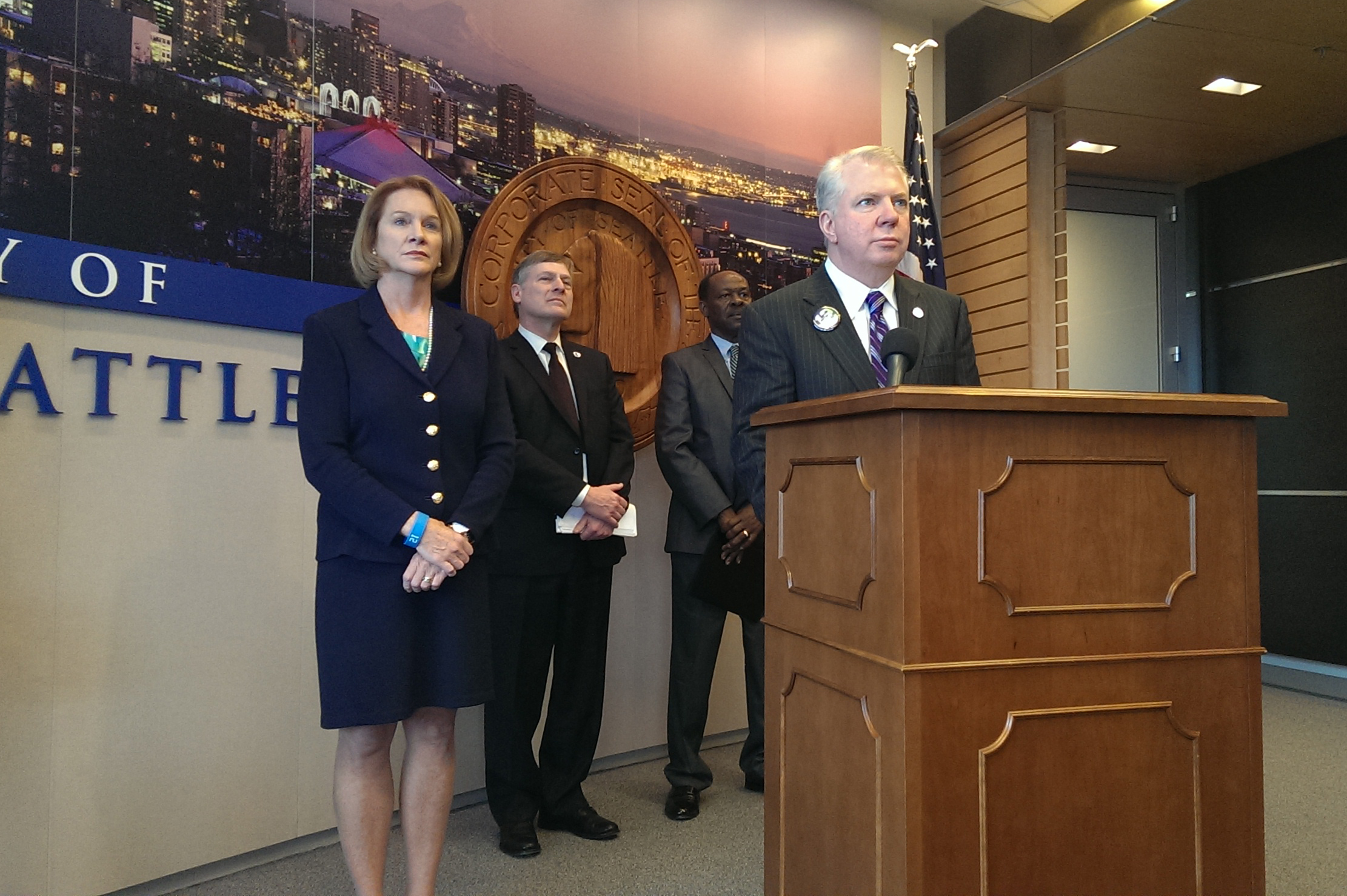 “For the second day in a row, I’m speaking to you once again because our city and our nation is shaken,” said Mayor Ed Murray as he opened yesterday’s press conference.

The mayor’s previous presser, held Thursday afternoon, addressed the deaths of Alton Sterling and Philando Castile, two Black males fatally shot by police within less than a day of each other. Yesterday’s media assembly was called after a sniper shot eleven Dallas police officers during a protest Thursday night, killing five of them.

“This is both a pivotal and dangerous moment in our history,” Murray said. “How we choose to respond will determine our ability to come together.”

The mayor was accompanied by SPD Chief Kathleen O’Toole who released her own statement earlier in the day using a Martin Luther King reference to commend police for rushing to help each other in moments of crisis like Dallas.

“This is certainly the most challenging time of policing since I’ve been in this business,” O’Toole said. “SPD was well on the road to reform prior to Ferguson and other national tragedies.”

The Seattle Police Officer’s Guild posted a message on their Facebook page soon after the Dallas shooting stating “the hatred of law enforcement by a minority movement is disgusting.” The Guild later deleted the Facebook post, but that did not stop people from screenshotting it. At least 142 people viewed the post, as counted by the post’s “reactions.”

“Do we have bad apples? Yes, like every other job occupation,” she said, “and it’s our job to weed them out.”

However, questions remain: will those rotten apples ever be weeded out or will O’Toole put action behind her statement? Who was in charge of the SPOG Facebook page? It feels a bit like the tootsie roll commercials, because the SPOG Facebook page has been deleted: The world may never know. The Guild’s Twitter page has also mysteriously vanished.

Taking the podium, Pamela Banks, the president and CEO of Urban League Metropolitan Seattle, said what happened in Dallas hits close to home because of  her friends in the police force. Regardless, that doesn’t change her position as a Black woman, and a Black mother, said Banks, who has a son in Oregon.

“I call him two or three times a day to ask him if his brake lights are working,” Banks said. “I’m serious, because that’s what he faces as a young Black man.”

It echoed similar sentiments around a string of highly publicized deaths of people of color at the hands of police officers.

“We have to talk about race,” she said. “We did not get here five years ago, ten years ago. This is four hundred years in the making.”

She asked that these events not overshadow the good work happening in the community. After concluding her speech she moved to the background, wiping tears from the corners of her eyes.

“The community out there is very disappointed in the way things have been going,” he said, “and that’s a mild way of putting it…They’re afraid to drive in their cars — and I’m just speaking my heart, because I can’t speak for everyone.”

Willis said he attended the rally held for Castile and Sterling in Westlake Park Thursday night. He recalled the moment he and others heard about the police shootings in Dallas.

“I can’t even imagine—” he cut himself off as his voice broke and tears formed, though he wouldn’t let them fall. Regathering himself, he stated that people can not continue to hurt one another and use hatred and anger in destructive ways.

“We have to do it in a way that we can be able to vent our frustrations and hurt but also do it in a constructive way,” Willis said. “Being asked to speak today…I can’t express what I should say, there’s so many other people that could be up here. Just look at my face, I don’t know what else to say but we’re hurting and we’re in pain and we have to come together for a solution.”

The pastor talked about a moment at Thursday’s rally that “hit [his] heart.” Willis said a young person he spoke with felt as if he was living under a terrorist regime in the United States.

“The politics is simply tearing each other apart,” said Murray at the end of yesterday’s conference, “and denouncing our opponents will not heal the wounds of racism…The issues are pushed to the extreme and we demonize those we disagree with.”

He called this “the politics of division.”

Behind the mayor were perhaps the largest grouping of people of color ever assembled in City Hall’s 7th floor press room.

Amidst those bracketing him was Deputy Chief Carmen Best, along with three SPD officers.

“I am deeply disturbed by the action that results in the death of any person,” Murray said…although the death at the time was in reference to people of color.

“It can’t be about blaming black men,” Murray said.

He went on to list off other buzz wordy issues of the day during his speech: minimum wage, school-related disparities, transit, police reform, and body cameras.

“Often, the police are at the receiving end of other injustices when it comes to race,” the mayor said. The mayor seemed to be straddling the fence when it came to the topic, it was as if he was tactfully walking on eggshells, trying to say all that “needed” to be said on the topic of police brutality, while making certain not to offend the officers in the room. How political.

He argued body cams protect police just as much as civilians, making an encounter between the two more civil. Murray also mentioned force directed at police officers by civilians.

This reasoning seemed interesting: twisting the same reasons typically used to talk about police accountability to instead protect those who are already far more protected than civilians. The police officers (rightfully) wearing bulletproof vests, and having tasers, guns, bullets, and a slim chance of getting any judicial charge or even being barred from being a cop somewhere else.

Yes, the job of a police officer is inherently violent because you can’t uphold the law without an application of violence. And yes, given there are police officers killed in the line of duty, they clearly have a dangerous job. But let us not forget why the greater public supports body cameras: to hold cops accountable, and, the hope is, to reference those body cameras in a judicial process afterward if needed.

Behind Murray, one man  fidgeted and stared blankly forward, another kept looking as if he was about to cry but wouldn’t do it.

But what’s really concerning is that of all the publicized shootings of people of color by police that have been recorded, only a few officers were charged. When that was pointed out to Murray, he only reiterated what had already been said: His practiced responses. Makes a person wonder why on earth he bothered to hold a conference if he doesn’t care enough or know enough to respond to that type of question with unpracticed answers.

In a turn of events, the mayor even turned the fact that the federal Justice Department is investigating SPD into a good thing: “unlike the departments in Missouri, Louisiana, the Department of Justice is already here.” He then suggested that other cities are running to us as a model.

Murray talked of officers needing a clearer process in terms of best practices, when and when not to do things, and, much to my surprise, Best nodded with furrowed brows several times in agreement.

There was much talk about designating an SPD independent auditor position for police oversight and discipline (under the Office of Professional Accountability). But negotiations are ongoing.

“To Seattle’s residents of color: your city cares about you, your lives matter,” Murray said. “To Seattle’s white residents: I ask you to let us work together.”

A full video of the Mayor’s first press conference can be found online.

A transcript of the mayor’s speech for the second press conference is also online.

Kelsey Hamlin is an intern with South Seattle Emerald this summer, and has worked with various Seattle publications. Currently, Hamlin is the President of the UW Chapter’s Society of Professional Journalists, and will be starting an internship with KCTS 9 in July. She finished an internship with The Seattle Times in March as an Olympia legislative reporter, and is a journalism major at the University of Washington, planning to double-major in Law, Societies & Justice (currently her minor). See her other work here, or find her on twitter @ItsKelseyHamlin.

Featured image is a Wikicommons photo

This article has been updated as it originally stated that a tweet by SPOG  read “a minority group is disgusting.” The tweet actually read “the hatred of law enforcement by a minority movement is disgusting.”