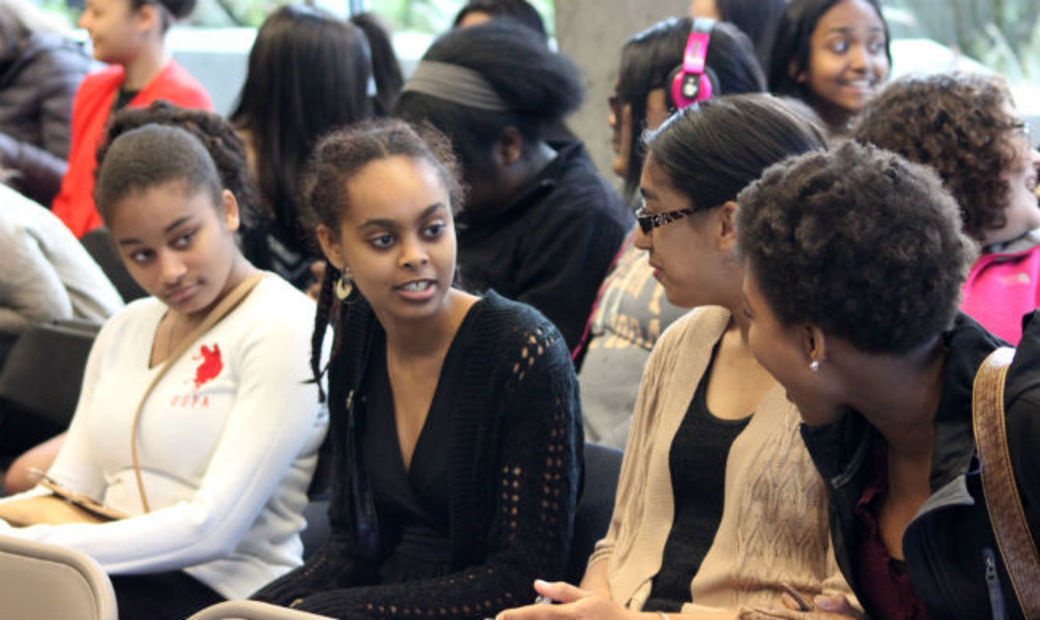 (This article was originally published on YES Magazine)

Artina Daniels has always been a tinkerer, obsessed with discovering how things around her work.

Four years ago, before starting the eighth grade, she asked her parents to help her find a school where she could channel those curiosities.

With private-school tuition off the table, the Daniels family’s research led them to TAF Academy, a small, neighborhood school for 6th–12th grades, with a project-based learning curriculum focused on science, technology, engineering, and math (STEM).

A unique partnership between the Seattle-based Technology Access Foundation (TAF) and Federal Way Public Schools, the academy grew out of an initiative the foundation launched 20 years ago to expose underrepresented students of color to an education and careers in STEM, where national studies have shown them all but invisible.

The school’s 300 middle- and high-school students, equipped with school-issued laptops, learn by working collaboratively with teachers and each other, applying analytical thinking to big-theme projects that seek to solve real-world problems.

“It feels like my daughters are getting a private school education in a public-school setting,” said Robert Daniels, Artina’s father, whose youngest daughter also attends the school.

At a time when educators across the country are exploring ways to boost student achievement and address the needs of a 21st-century economy, TAF Academy is dispatching a diverse crop of students into college and careers in STEM.

Educators from elsewhere, including Canada and several districts in China, have come to the small campus spread among beige portables to see what students are doing. The school, which had its fifth high-school graduation last month, boasts a 98-percent on-time graduation rate and a 100-percent college acceptance rate for graduating students.

And now the foundation is sharing its model with other schools in the state, with a goal of reaching 15,000 students by 2020.

“Yes, we are preparing the next generation for 21st-century employment, but we are also preparing them for society in ways that are just as important, like how they interact in a democracy and serve their communities,” said Paul Tytler, the school’s outgoing principal.

TAF Academy students exude self-confidence, and it’s easy to see why. Here, no one gets to hide.

With several exhibitions a year, they are constantly presenting projects—about clean-water systems for impoverished areas, neural prostheses to aid the disabled, and a “bee-vilion” to protect the vulnerable bee populataion—and explaining themselves.

On a recent day near the end of the school year, one sixth-grader after another spoke enthusiastically about an elaborate carnival they orchestrated to raise money to repair roofs of schools damaged in the Fiji cyclone last February.

Plus, every TAF student learns to code and design.

Ultimately, the aim is to not just create the next generation of STEM professionals and entrepreneurs by making these students college-ready, but to empower young people to be socially conscientious citizens.

Twenty years ago, Trish Millines Dziko wasn’t thinking about creating a school at all.

A program manager at Microsoft who later recruited for the company’s internship program, she was struck by the absence of students of color—primarily Black and Latino students—and eventually left the software company to do something about it.

She co-founded TAF and assembled a team of educators, like-minded advocates, and tech-savvy folks to start an after-school program.

Five years into it, Dziko realized students weren’t taking the classes necessary to prepare them for STEM majors.

But efforts to partner with Seattle Public Schools to create a school where, as Dziko put it, “we would be responsible for all of their learning,” never materialized.

Within weeks, the superintendent of Federal Way Public Schools—in an increasingly diverse district 30 minutes south of Seattle—reached out with a proposal for a school there.

At a time when school transformation was all the buzz—in the middle to later part of the last decade—such a public–private partnership was still uncharted territory. The Washington State Legislature had yet to define a K–12 STEM education, and voters were years away from authorizing charter schools.

The district gave TAF broad latitude in developing a STEM-focused curriculum around project-based learning, though it still has to comply with district and state standards. Education coaches train teachers to teach the TAF way.

On top of the district funding the school receives, the foundation raises $600,000 annually—about $2,300 per student—for educational enrichments, primarily around technology.

Tammy Campbell, who became Federal Way Public Schools superintendent last year, praises TAF Academy, which, she says, “provides real-world experiences and STEM-rich opportunities that get our scholars excited to learn and have a better vision for college and career readiness.”

Dziko, an African-American woman who spent years battling her way through the male-dominated high-tech industry, believes unequivocally that every child has the capacity to learn.

The academy’s demographic profile reflects one she long ago envisioned: More than two-thirds of its students are of color, and half come from households with incomes low enough that they qualify for free and reduced-price lunch. Many are poised to be the first in their families to go to college.

Students at TAF Academy aren’t grouped according to academic performance; those with academic and behavioral needs learn right alongside their classmates. The school provides tutors, when needed, primarily in math and science.

Students’ test scores often match or exceed district and state averages, and all seniors must apply to at least five colleges and for at least 10 scholarships.

Over the years, TAF has forged other key partnerships with local and national institutions and corporations, including Expedia, Comcast, and the Fred Hutchinson Cancer Research Center (known locally as Fred Hutch), which designed a lab specifically for TAF Academy students and that other area high-school students use as well. These connections open important doors for hands-on learning and mentorships.

“We’re not the kind of school where our seniors come in at 8 o’clock and go home at 3,” Tytler said. “We want them to help change something and make a difference.”

In eight years, a number of state and national groups have recognized TAF Academy for its innovation, and for four consecutive years it has been named a School of Distinction by the Center for Educational Effectiveness for ongoing improvement.

“We are true partners in this,” Dziko says. “These are our kids. They look like us. They come from the same places we come from. We cannot fail at this.”

Beginning with the 2017-18 school year, Dziko and her foundation will be at a crossroads. The academy will merge with an existing 500-student middle school, becoming TAF Academy at Saghalie.

The plan will bring the TAF style to Saghalie and give TAF Academy students access to more science labs, courses, and collaboration with a wider student body.

But it is, without a doubt, a game-changer for everyone and the first big test of the partnership’s ability to deliver the TAF model on a grander scale.

Here’s the challenge, Dziko said: “Can you create an environment like this in a traditional school … with a strong academic focus and project-based learning?

“There’ll be some tradeoffs,” she said. “But I expect to see the same level of attention to kids. Out of everything, that cannot go away.”

From the National Inventors Hall of Fame STEM Middle School in Akron, Ohio, and Boston’s Urban Science Academy to MC2 STEM High School in Cleveland, public schools across the country are increasingly adding STEM to their curricula or creating STEM schools from the ground up.

More often than not, the transformations are in partnerships with big STEM-industry employers who understand that today’s youth are the workforce of the future.

When the Washington State Legislature defined a STEM education for K–12 in 2010, it also established a model-school fund to allow schools to learn from each other.

“Right now, STEM careers are growing at three to five times the rate of non-STEM jobs,” said Clarence Dancer, STEM coordinator for the state Office of the Superintendent of Public Instruction. “We need to fill this void, and companies will fill it one way or another—either with our students or students from another country.”

Still, studies show the needle has barely budged for getting underrepresented minorities into the STEM pipeline. In fact, their absence is such a concern that the Equal Employment Opportunity Commission held a rare public hearing on the industry’s hiring practices this spring.

In Washington state, not enough is being done to drive these students into the pipeline, Dancer said. “That’s where a place like TAF [Academy] comes in,” especially if it can produce results on a larger scale.

Boze Elementary School in Tacoma just wrapped up its first year using the TAF model. Principal Aaron Wilkins said his teachers, committed to finding more effective ways to reach students, had been building toward a similar approach, but hadn’t fully articulated it.

Students are more engaged, Wilkins said. “We’re not just seeing the value; we are seeing a transformation. And it’s not just the kids, but teachers who have been teaching a long time.”

The five-year partnership agreement between the foundation and Tacoma Public Schools comes with training and support for Boze teachers.

“What Trish asked of us is not easy,” said Wilkins. “My teachers are working their tails off, but they are enthusiastic about this.”

Indeed, this style of teaching and learning is hard for everyone.

Tytler, TAF Academy’s third principal, had been at the school five years and said he’s leaving to pursue his doctorate.

He joins four of the school’s 17 teachers who also left at the end of the school year, all for various reasons.

For TAF, the ongoing challenge has been finding educators—up and down the line—committed to this style of teaching. The hiring process is rigorous, and teachers must present a lesson in front of students, who get a voice in the decision.

“You don’t go into the classroom, close your door, and teach,” Dziko said of the TAF style. “You have to create projects every year and create them based on what students decide, not some cool new thing you find on the internet.”

On a recent morning, Carlito Umali’s seventh-grade humanities class was staging an end-of-year Academy Awards celebration, in which students recognized each other for their accomplishments during the year.

Umali said he finds teaching here transformative. Elsewhere, “I felt like I was filling potholes. Here, the administration is invested, and I’m free to be as creative and imaginative as I want, to ensure these kids benefit and succeed.”

Artina Daniels is preparing for her final year at TAF Academy and making plans for college.

At the small school, she said, she has received the kind of attention she might not have gotten anywhere else.

She discovered her true passion in its small engineering lab, where she used 3D printing to build materials for sustainable housing and, with other students, created neural prostheses for people with disabilities.

She learned JavaScript from Microsoft employees, studied Japanese, and last year traveled to Japan and to Costa Rica, using her TAF connections.

Artina said her internship at Fred Hutch, where she’s studying synthetic virology, has opened her eyes to the flexibility of a career in science.

“I believe the education we get here is far more in-depth because we focus longer on a topic,” she said.

“We take and apply what we learn to large, college-level projects, with many moving parts, instead of a worksheet. This definitely prepares us well for college.”