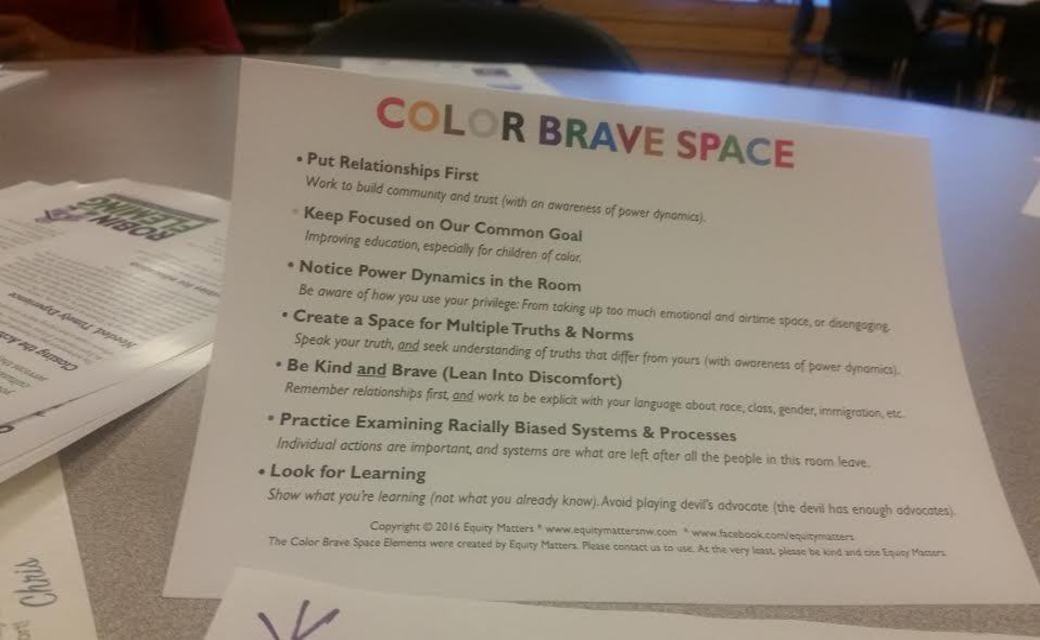 It was an interesting night Tuesday at the New Holly Gathering Hall where over 60 people attended The  Office of Superintendent of Public Instruction Candidates Forum.  This forum, hosted by Southeast Seattle Education Coalition, Equity in Education Coalition, Coalition of Immigrants, Refugees and Communities of Color and League of Education Voters, brought out 6 of the 9 candidates listed on the ballot, who each presented energetic – and surprisingly different – platforms in their bid for Washington State’s highest education position.

Every attendee I spoke with found the Forum illuminating in one form or another.  One Central District resident noted that seeing and hearing the candidates in person allowed her to judge their genuineness.  She arrived expecting to vote for one candidate but, by the end of the night, had decided to vote for someone else.  Another attendee, a Franklin High School teacher from Hillman City, appreciated the personal nature of the event as it allowed her to get all her questions answered, even after the forum had officially ended.

Unlike traditional candidate forums, the organizers of Tuesday’s gathering created an intentionally personal event where candidates’ stump speeches were limited and there was no debating.  Instead, most of the time was spent with candidates answering voter questions in small groups, seated together around tables.

“I never knew 15 minutes could feel so short and so long!” one attendee cried, referencing the time each candidate was allotted for questions with the small groups.  With certain candidates, the 15 minutes went by so quickly, leaving us wanting more and wishing to ask just one more question.  With others, the awkward silences and palpable tension between questions seemed unending and 15 minutes felt like an hour.

Small group discussions were not the only unique thing about Tuesdays forum.  The event was unapologetically focused on equity in education and POC-centered.  For example, in addition to information on the candidates’ platform, each table held a sign designating the Gathering Hall a “Color Brave Space” and detailing guidelines such as: “Notice Power Dynamics in the Room” and “Lean into Discomfort”.

SESEC Executive Director and the evening’s monitor, Erin Okuno, drew our attention to the Color Brave Space signs before beginning the forum, encouraging us all to abide by and honor the guidelines, to ask hard questions and be brave and kind.  As she spoke to the room I felt her words were meant as much for the candidates as for the voters in attendance and I very much appreciated that such a tone was set.

And while I thought it couldn’t get better than the Hershey’s miniatures Okuno passed around the tables during the small group discussions, it was truly the final element of the night I found most unique, powerful and clarifying.  After all the candidates had spoken with each small group, Okuno invited them back on stage for what I assumed would be a brief closing remark from each candidate.  Instead, she instructed each candidate to take one minute to reflect back to attendees what they heard from us during the evening.  She rooted this practice in equity principles, noting that it is essential we feel heard and understood when we participate in discussions about race.

As with most of the rest of the evening, this final practice allowed the candidates’ true colors to show through; some struggling to go “off-message” with anything but their own platform, while others shone, demonstrating the essential ability to hear others deeply and reflect their experience.

Of the six candidates present at the forum, I only heard three names being considered by attendees after the event: Erin Jones, Chris Reykdal and Robin Fleming – but Erin Jones seemed to come out ahead in most estimations.  One attendee, a Rainier Beach resident, said Erin Jones was “head and shoulders” above the other candidates.

I couldn’t agree more.  Jones expressed a solidarity and understanding of equity in education from her own experience – both personal and professional –  that resonates deeply.  She radiates confidence and competency and came across as supremely genuine and likeable.  And even though she had no printed pamphlets or brochures at the forum, her platform was clear and precise and she answered policy questions with a welcome blend of expert knowledge and accessible common-sense.

Ultimately, the Forum was a valuable decision-making tool for myself and the other attendees I spoke to, many of whom made their voting decision during the forum; either changing their minds or making a choice for the first time.  The relationship-building required by the small group model allowed a deeper window into the candidates than a traditional panel format where candidates often end up debating each other instead of being held accountable to voters.

Perhaps the only improvement would be more attendees.

I am heartened by the OSPI Candidate’s Forum and the education activist leaders who came together to make it possible.  Though we clearly have a very long way to go, I feel great hope for the future of Washington public schools with committed, POC-centered groups like SESEC, Equity in Education Coalition, CIRCC and League of Education Voters leading the way for equity reform.  I look forward with great anticipation to their next effort.

Marilee Jolin is a Beacon Hill resident and writes a regular column for the Emerald.