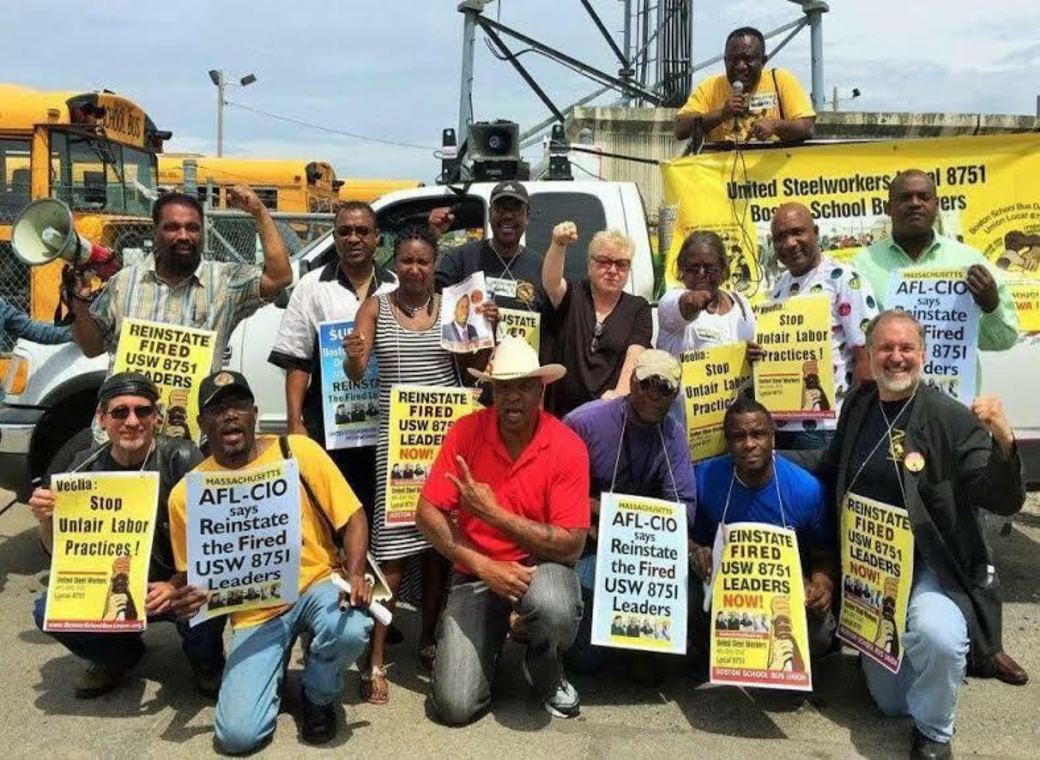 Congratulations to the Boston School Bus Drivers Union, United Steelworkers (USW) 8751, on their victory against Veolia/Transdev! This past December, after more than two long years of struggle against Veolia and the City of Boston, USW 8751 “Team Solidarity” won an improved contract with great medical and retirement packages incl. $5 copays, retroactive gains paid for the two years they didn’t have a contract, protections on 40 years of collective bargaining gains and the four fired union leaders were reinstated with full seniority and financial restitution!

Last year saw another huge victory against Veolia. In August 2015, Veolia pulled out of its last ventures in Palestine and Israel after years of being one of the main profiteers of Israeli apartheid. The victory is only short of complete until Veolia pays reparations. After selling first its apartheid bus lines; then part of its shares in the apartheid light rail, which connects illegal Israeli colonies to Jerusalem; followed by the sale of the its illegal landfill in the occupied Jordan Valley and its water and sewage ventures in Israel and the settlements; and then finally its remaining shares in the apartheid light rail — Veolia became the first major victory for the movement for Boycott, Divestment & Sanctions (BDS) against Israel. In the years prior, the BDS movement achieved many smaller victories which together are responsible for costing Veolia upwards of $24 billion dollars in lost contracts and for pressuring Veolia to ultimately pull out of Palestine and Israel completely.

The Boston School Bus Drivers Union has consistently been in solidarity with the Palestinian liberation struggle. “Team Solidarity” has been building power among the working class through a 40-plus-year commitment to racial justice, disability justice, LGBTQ rights, local struggle and anti-colonial/anti-imperial struggle including solidarity with Palestine – not just in words but by consistently showing up in the streets, joining picket lines, packing court rooms, walking out with students and teachers, and standing with the local community.

The BDS National Committee has expressed ongoing solidarity with the Boston School Bus Drivers Union and all who continue to struggle against Veolia’s public endangerment, union-busting and pocketing of public funds. These two 2015 victories against Veolia, austerity, and apartheid show us that when we build solidarity together we are strong.

Privatization jeopardizes public health and safety at home, just as it does abroad

French corporate giant Veolia is the largest privatizer of water in the world and has long been a target of water justice activists for low-bidding on public water contracts, driving up costs, reducing service, underinvesting in public infrastructure, contractual noncompliance, false reporting, turning public investment into private profit, jeopardizing public health and safety, poisoning entire populations, and covering up its own and government failures.

Veolia and Suez — another French company and the world’s second largest water privatizer — have pointed to their operations in France to encourage cities worldwide to privatize public water service. But water privatization has been a disaster in France. From 1985-2009 water bills went up 265 percent, even while the private companies weren’t maintaining the infrastructure as required. They were recklessly cutting costs and jeopardizing public health and safety at home, just as they do abroad. They declared profits of six to seven percent but in actuality their profits were much higher. In 2010, Veolia and Suez lost the Paris contract they shared 50/50 for water supply and billing. The very first year after Paris returned the water contract to public management, there were savings of 35 million Euros and the cost to consumers was reduced by eight percent. According to Food and Water Europe, “Paris is one of more than 40 French municipalities and urban communities that reclaimed public control of their water systems over the past decade to reduce prices and improve services.”

Veolia has lost these battles where activists have been organized and united. But there is reason for grave concern, looking at Veolia’s relationship to authoritarian state actors, all of the harm Veolia caused just in 2015, and how free trade agreements serve to further limit civilian recourse to corporate and state accountability.

Veolia continues to win lucrative contracts and work with government actors to privatize resources and to solidify new laws and trade policies where they will have more power and be able to make more profit with less accountability. This is terrifying, given Veolia’s track record of public endangerment and fraud, and that Veolia is a lead union-buster brought in by governments to enforce racist austerity measures against the poor.

One aspect of the Boston struggle deserving of more attention is how Veolia was rewarded for union-busting. The four union leaders were fired by Veolia Assistant General Manager of the Boston contract, Jonathan Sanders — who shortly later resigned, changed his name to Jonathan Steketee, and in a blatant conflict of interest was appointed Transportation Director of Boston Public Schools, a position he still holds.

Veolia’s role in the failure, cover-up and worsening of the Flint lead poisoning crisis and Legionnaires Disease outbreak has made it the target of a lawsuit by the state of Michigan. Flint’s Emergency Manager awarded Veolia a $40,000 contract to address Flint’s water quality issues. On March 12, 2015 Veolia released a report stating “The review of the water quality records during the time of Veolia’s study shows the water to be in compliance with State and Federal regulations, and, based on those standards, the water is considered to meet drinking water requirements.”

General Motors had stopped using water from the Flint River nearly six months earlier because the water was corroding engine parts. There is reason to believe the Veolia tests should have shown high levels of lead in the water supply, as shown by contemporaneous city and independent tests.

Veolia is tied to other failures of the undemocratic Emergency Management system forced on seven cities or school districts in Michigan, including Flint and Detroit. Cities are governed by high paid outside managers appointed by the Governor who have the power to overrule local elected officials. Residents who are impacted are predominantly Black.

With the creation of the Great Lakes Water Authority, which took power away from Detroit and gave white suburbs a bigger say, Veolia was brought in as a consultant and conducted a peer review of the Detroit Water & Sewerage Department. Activists in Detroit, who include Detroiters Resisting Emergency Management, Peoples Water Board, Moratorium Now! Coalition and We the People of Detroit, are vocal on Veolia’s role in the water cutoffs that began in April 2014, when Detroit contracted with Homrich, a demolition company, to carry out 70,000 shutoffs in 730 days.

Families are having their water cut off for outstanding bills of $150, while a golf course, stadiums and other corporate enterprises have owed $30 million for water and never had their access threatened. Today 91,000 people in Detroit are without water, and water shutoffs continue for a third summer in a row with one in five people at risk of losing service.

The cost of water in public housing in Detroit is many times that in rich white suburbs. Residents who do not pay their utility bills get kicked out of public housing, and the city sells the emptied lots to developers.

Meanwhile the notorious Michigan Department of Environmental Quality allows Nestlé, the largest water bottling company in the world, to pump up to 400 gallons of water per minute from aquifers that feed Lake Michigan, while paying next to nothing and receiving tax breaks from the state. This is how privatization and austerity work.

Veolia is a caution story against the Trans Pacific Partnership

The same month that Flint switched over to the Flint River — without basic textbook precautions to prevent lead pipe corrosion — tests found that Veolia negligence was responsible for poisoning 3.6 million people in Lanzhou, China with extremely high levels of Benzene in the public water supply.

Residents who sued Veolia for the cost of medical treatment and bottled water were denied compensation. “Su Kehong, deputy head of the court, admitted that Lanzhou Veolia’s lack of regulatory supervision led to the tap water crisis, but the court rejected the claims because the company had adopted remedial measures to deal with and compensate for the pollution, such as apologizing to the public, publishing water quality testing data, and cutting down water charges on locals.” (Xinhua News Agency, Nov 27, 2015.)

In 2010 a World Bank court ruled that the poor province of Tucuman, Argentina had to pay a Veolia subsidiary US$105 million in damages (an amount nearly equal to ten percent of the public debt of Tucuman province) because corporations have a right to make a profit off the supply of public water.

The Veolia subsidiary had raised the cost of water 95%. Meanwhile there were severe water quality problems and other areas of contractual non-compliance and 37.8 percent of the population had no ability to pay for water. Seven small cities formed a coordinating committee and established a consumer organization to provide legal support for a resident-organized payment boycott.

But the World Bank’s International Centre for the Settlement of Investment Disputes (ICSID) ruled that the poorest province of a poor country had to pay a dishonest and incompetent international corporate state actor nearly twice as much as they paid before – for water that had become polluted and was running brown.

The local government was overruled and found not to have jurisdiction over the cost of public water in their province. Veolia was not held accountable for the poor water quality or for failing to fulfill its contractual obligations.

Under the Trans-Pacific Partnership (TPP), we the people — being occupied by the corporate police state — will have even less recourse.

Private corporations like Veolia who profit from public investments in basic services, like water, transportation and trash, will have more legal protections to get away with mass poisonings of entire populations and other crimes. Even when the corporation is violating its end of the contract, it will have increased legal protection to set whatever salaries they want and to embezzle in other ways. Public municipalities will increasingly foot the bill.

It’s time that we as a community come together and get real about corporate power, how it impacts our individual and collective struggles, and strategize to beat it!

The Boston School Bus Drivers Union, the BDS movement and Indigenous activists are at the forefront of this struggle.