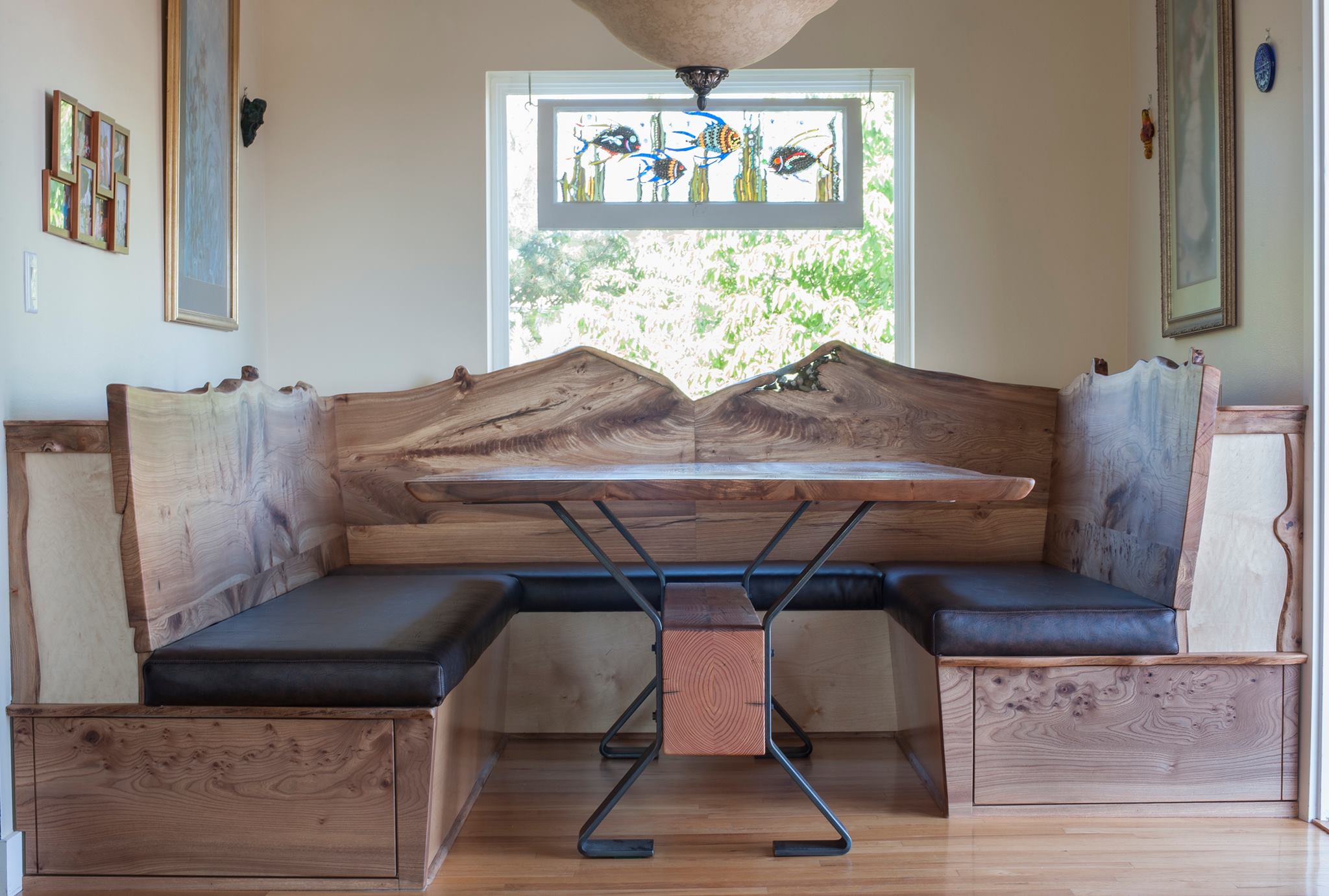 Herzog describes initially having “a lock all doors attitude” whenever he and his friends would venture south from the Ballard neighborhood he grew up in as a teenager.

Now, however, the 41 year old owner of Esquiness Woodworks,  could not imagine living anywhere else, which is why he’s bringing his display of original handcrafted furniture pieces (tables, lamps,  and cutting boards) to the Rainier Beach BAMMFest this Saturday.

The Rainier Beach resident moved to the neighborhood from Colorado in October of 2004 after his wife Jennifer became pregnant.  They felt living at 9600 ft above sea level posed a major risk to their unborn child, as the children of two of their neighbors were born prematurely and dangerously underweight.

Initially, Herzog stayed with his parents, and planned to be in the neighborhood only temporarily until finding a house elsewhere in the city, however, he and his wife soon feel in love with the neighborhood. A few months later they purchased a home not far from Shawn’s mother and father.

That is currently where Herzog goes about his woodworking, fashioning hardwood tables and chairs from his home furniture studio.

Herzog says furniture building runs deep in his family, as his grandfather also did it, however his love for the craft really blossomed in a wood shop class at Ballard High School. The hands-on nature of the tasks were something he readily enjoyed. Since then he’s been making furniture, sometimes as a hobby, and other times as business, but at all times as a passion.

Originally, he and a friend started a cabinet making business out of Herzog’s home, but after the economy crashed in 2008, he was forced to find stable employment maintaining aquariums. While it provided consistent income, the constant driving and stressful environments he found himself in caused a high level of anxiety. After meditating on what he actually wanted to do with his life, Shawn came to the conclusion that it was best to take the plunge back into his first love.

Working day in and day out for his own business has been a welcome relief, says Shawn. He has been at at Esquiness fulltime for the past two years. The name means, “exquisite with a hard edge,” according to him.

With the majority of his clients based  in the South End, Herzog has relied on strong word of mouth to garner awareness of his work, something he describes as a providing a “chain reaction” of business for him.

One of the first pieces he created at Esquiness was a table for Red Wing Café, owned by his parents, in Rainier Beach, from an old tree removed from their yard.  Soon after the table was installed, the owner of Island Soul restaurant visited the café, and became enamored with the furniture. This soon led to Shawn designing that restaurant’s new metallic base bar top. Subsequently, the owner of Jus Bar in Columbia City visited Island Soul, fell in love with the bar top, and well, you get the picture.

“As a parent it is very exciting to see my son doing work that makes him so happy and at the same time produces such incredibly beautiful pieces of art. I love watching him grow as an artist and business person and especially enjoy seeing his work in local businesses,” shares his mother Su Harambe.

Herzog employs a fairly unorthodox process in crafting his furniture. He prefers to forego designing his pieces in advance. He instead collects all the materials he thinks he’ll use for a piece and lays them out in front of him, allowing the piece to take shape organically in his head.

He realizes this requires a lot of faith on the part of his clients, but says most have been willing to trust him so far.

They appreciate not only his unique design but the price point, which is more affordable relative to comparably handcrafted wood work such as Urban Hardwoods.

“We kind of live in this throwaway society, and I think people are really starting to appreciate durability in their goods nowadays,” says Herzog, who shares he does understand the necessity of IKEA furniture for some people.

Several organizations around South Seattle have been recipients of Herzog’s durable goods, as he has donated his pieces for local auctions to raise money, including a table that sold for $1000 at Bike Works’ annual auction last March.

Shawn sees such things as a way of giving back to the adopted neighborhood he once never wanted to set foot in, which he now imagines staying in for the rest of his life, describing a typical weeknight as families from within his neighborhood hanging out in each other’s back yards while their children run around gleefully.

“I love this place. This is truly where community is.”

Shawn Herzog will be displaying his wood work at the Rainier Beach BAAMFest on Saturday, July 23rd, from 11am to 7pm. He can be reached at shawn@esquiness.com