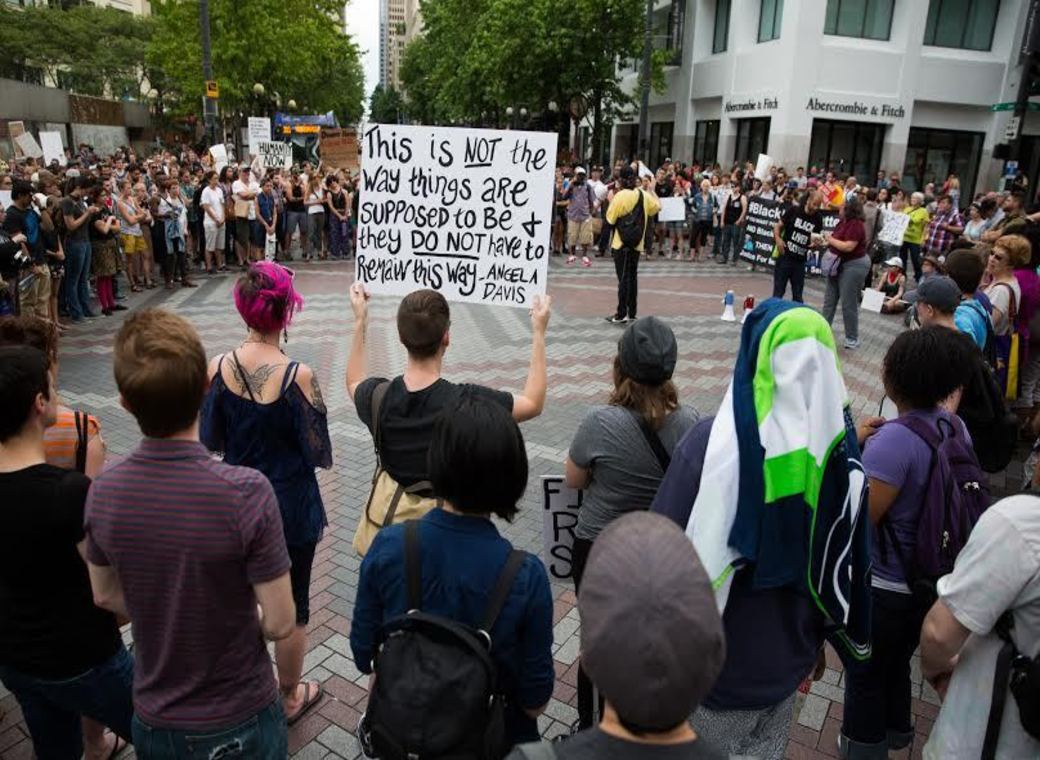 Yesterday at 6 p.m. over 700 people assembled in Westlake Park to demand justice for the murder of Alton Sterling and Philando Castille, with the assault on Charles Kinsey in Miami fresh in the public’s mind. Coincidentally this march came on the same day that Trump delivered an acceptance speech reminiscent of the fascist speeches of the 1930’s; with an intent on ‘saving America’.

The march began with a deep reflective moment with the organizer, Mohawk, playing Martin Luther King Jr.’s 1965 speech at the Lincoln memorial. While the organizers at the front wanted a moment of silence, the large assembly was buzzing with both confusion and reflection on the recent events that prompted the march. For a number of participants, this was their first Black Lives Matter march and they were among many familiar faces in the crowd. During the march, the crowd formed speaking circles at key intersections to give Black people and their allies space to discuss their experiences, frustrations, and fears about being Black in an increasingly openly hostile country.

The first speaker during one of the intersection occupations noted that this was her first Black Lives Matter rally, and that she “loved that so many people turned out for [the rally]” and that she was proud to be black. Throughout the evening, a wide array of speakers, mostly Black and with a decent gender-balance took the megaphone and spoke about their experiences. Most telling was how many of the experiences related to being black in Seattle. One 15 year-old young woman, who previously attended a middle school in Queen Anne, spoke about the micro-aggressions that she faced every day. Queen Anne, as well as much of Seattle north of I-90, has a reputation for being anti-Black. As the young woman spoke, she pleaded with the white attendees, “please educate your children better than that”, referring back to her experiences. As the group marched further along, the police followed in vans and on motorcycles.

Between the march, Trump’s chauvinistic acceptance speech, and the increasing Seattle Police Officers Guild (SPOG) led resistance to change in policing here in Seattle, the prophetic words of one of the speakers were relevant and haunting: “this is the time for change….which side are you on”? The mood and the comments from the march reflect an ongoing sentiment in America that has resulted in a number of emotions but also a familiar conflict over a point of view that centers ‘law-and-order’ over bodies of the oppressed and most vulnerable (i.e. People of Color, women, LGBTQ, immigrant peoples) or providing the space for the underrepresented to live on their terms. The resounding SPOG rejection of their contract, with 823 votes to 156, reflects the former sentiment. After numerous pushes from the community for accountability and transparency, Mayor Murray’s comments about this being a “setback” are an understatement.

Many people in the crowd yesterday alluded to the federal consent decree that has precipitated the reforms in the rejected contract and a number of speakers in the crowd either called on the federal government to intervene or for local authorities to take more responsibility. Whatever the outcome of the contract negotiations, federal investigations around the country or the election, the reality of our situation is clear; black and brown bodies are not safe and moderate reforms will not change this. However, the anger and frustration is palpable and we must decide where we stand and what we as a society are willing to give up in order to become a more just society. A just society cannot be based on maintaining control predicated on white dominance, but it must be one that rejects white supremacy. This means questioning and challenging positions held by elected officials, our spending, infrastructure, and security priorities. In order for our society to reject white supremacy, we have to reject the law-and-order point of view entirely. We must restructure police to not be warriors and for our institutions to not be oriented to suppressing dissent, but to respect and grow with our diverse communities without the implicit bias that has perpetuated over time. This is a big challenge, but we can concretely start by putting public pressure on SPOG to accept a contract that has a transparent Discipline Review Board and other court-mandated reforms set in place by the consent decree. Our silence is complicity in this organization’s intransigence and from seeing crowd yesterday, there is great momentum behind increasing accountability and ensuring the reform of our police department.

And for everyday people: if you see racism, call it out. Even if it is within yourself, and even if you’re not being polite about it. Am I urging everyone to engage in a witch hunt? No. I am simply urging everyone to be uncomfortable and discuss how our everyday actions perpetuate a culture that has allowed Trump’s rise.