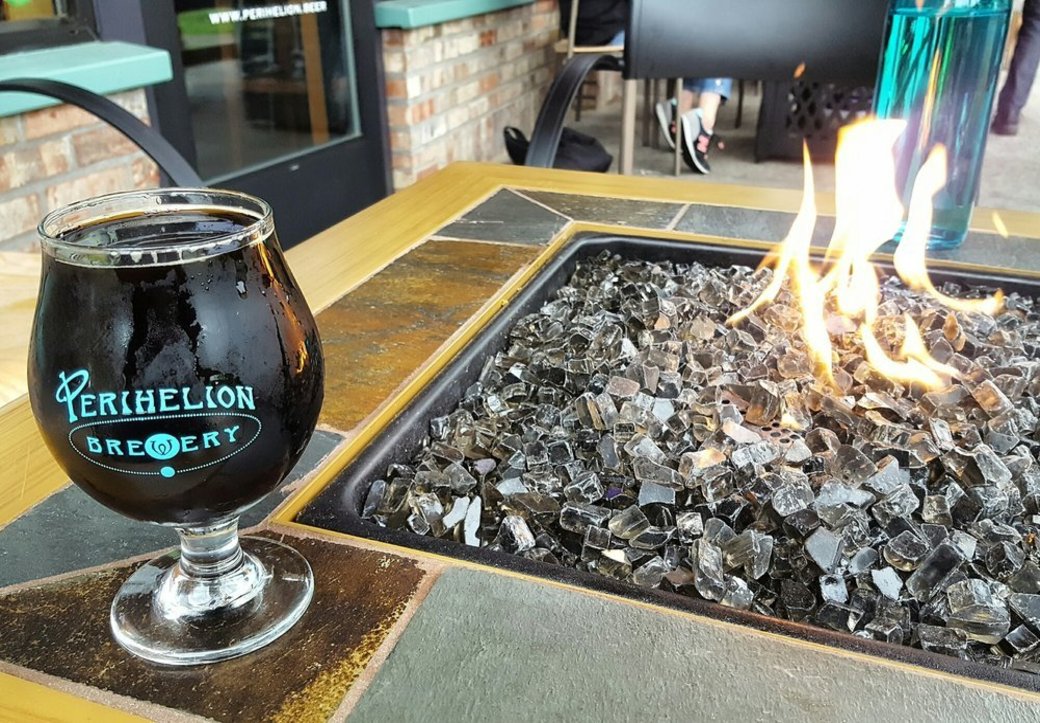 If you haven’t yet visited the newest addition to the food/drink options on Beacon Hill, Perihelion Brewery, you’re overdue. Located kitty corner from the Beacon Hill light rail station and the Red Apple market it is a welcoming, family-friendly addition to the neighborhood. My co-workers and I managed to grab a sunny outdoor table during happy hour (4-5pm) last week, first sampling (and becoming addicted to) the guest cider on tap, a Schilling’s seasonal grapefruit cider, accompanied by the house sweet potato fries appetizer (hungry yet?).

After consulting with the super sweet staff we moved on to a sampler tray of 6 Perihelion house brewed beers (there are 12 taps), requesting an array of light & dark beers to compare. My compatriots and I are not big beer drinkers but I figured our novice palates would offer an undiluted opinion for the purposes of this review (I take my Emerald assignments very seriously). First up was the Honey Ginger Stout, a very rich and flavorful brew which we found to be not too heavy (it ended up being one of our favorites). We then sampled the Belgian Blonde (light and smooth), the Betelgeuse Red (not our fave but a quality red ale), 60 IPA (another favorite with a complex and well-developed flavor), the Dark Belgian Strong (full-flavored, a little tarter than the stout) and the Double Pale (too light for our tastes but by that point we were addicted to the Honey Ginger Stout). As that only covered half the taps you’ll have to finish my assignment for me although I’m very curious to try the mead next time around.

To soak up the array of delicious brews we ordered dinner from our attentive server, a burger (that was mine so I can confirm its yumminess) and the Caribbean sandwich both ways, one with pork and one with chicken. There are also some enticing vegetarian menu options to sample so the meatless are accommodated as well. The food arrived quickly and was seriously scrumptious, hitting the spot after the beer and sun caught up with us. The four outdoor tables (with faux fire pits for when the weather turns chilly) filled up quickly but there is plenty of space inside to accommodate patrons and the service never slowed despite the growing crowd.

As we prepared to depart I attempted to purchase a growler (they offer two sizes, 64 and 32 oz.) of the honey ginger stout but was unable to because that particular brew uses nitro instead of oxygen. I’ll let you figure out the science of that but note that you can only enjoy the deliciousness of that particular brew on-site (which was a bummer because I think my Guinness drinking husband would really have enjoyed it). Likewise we were unable to purchase the grapefruit cider to go because it is a guest brew, not a Perihelion creation. Despite these minor disappointments we gave the Perihelion Brewery three hearty, slightly drunken thumbs up. Despite being beer novices we wholeheartedly enjoyed the brews, food and atmosphere. So glad to belatedly welcome this addition to the neighborhood (Perihelion Brewery is located at 2800 16th Ave S., see site for hours www.perihelion.beer ).