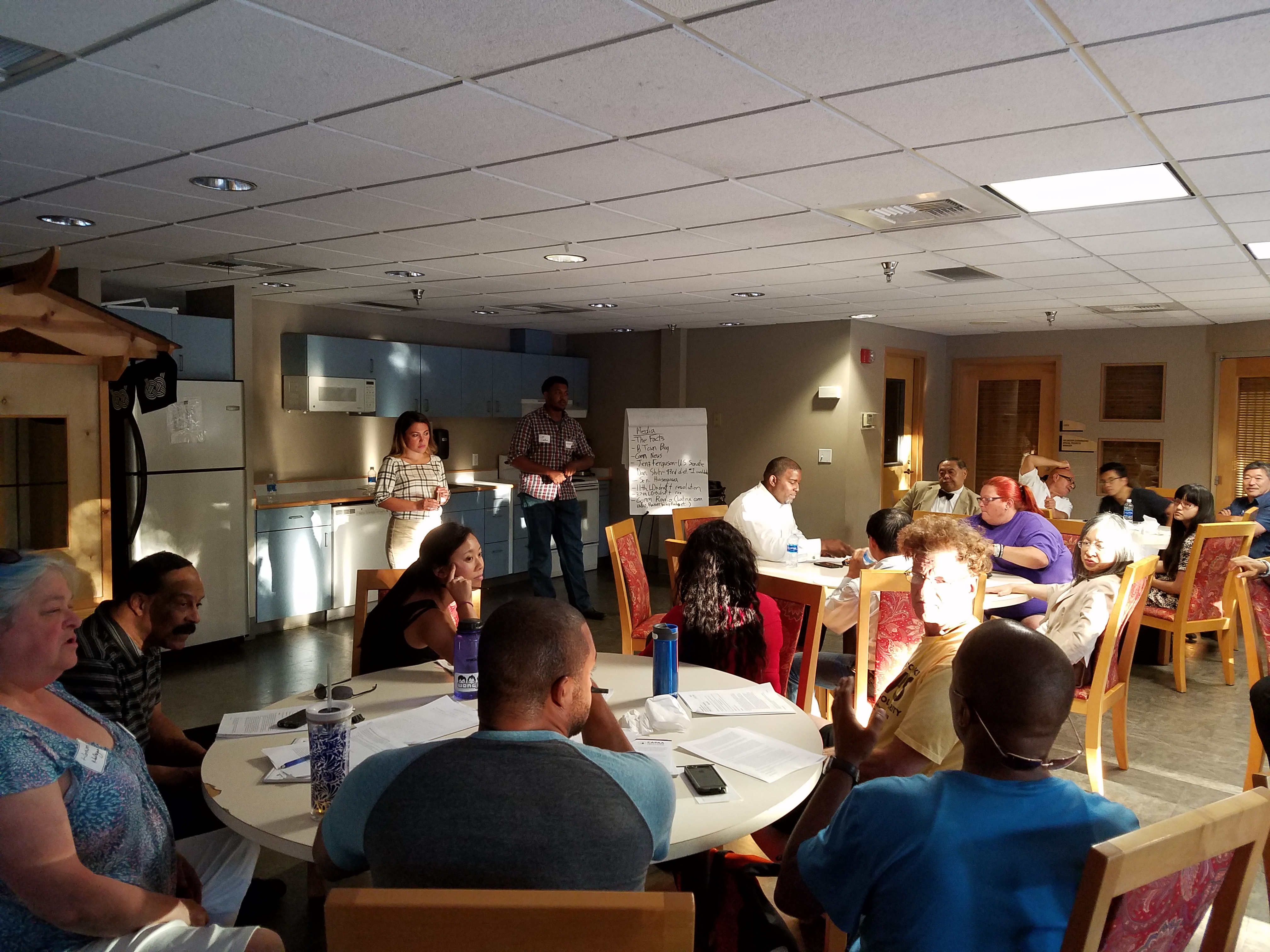 It’s no secret that in America, Black and Brown people are killed by police at a higher rate than white people. In 2015 Think Progress, a progressive policy magazine infamously listed the police among many common things that are more likely to kill you than an act of terrorism.

In April, the state legislature passed a resolution commissioning a Joint Legislative Task Force on the Use of Deadly Force in Community Policing to review current practices and recommend changes. But after 9 hours of meetings the task force has yet to discuss deadly force. So the community thought they’d take a crack at it. Last night, frustrated task force members representing communities of color convened a meeting at Keiko NW’s Garden Room. These members had interrupted the last taskforce meeting, questioning why the co-chairs had been silent on the issue of police use of deadly force. Neither of the first two meetings had the issue on the agenda. Thirty people gathered at last night’s meeting where task force member, Toshiko Hasegawa stated, “We’re here for one reason, and one reason only: to change the law on the use of deadly force by police officers.”

Current Washington state law sets the highest bar in the country for prosecuting a police officer.  According to the law, police use of force is justified if there’s an execution of duty in “good faith” and the police officer acted “without malice”. This subjective notion makes prosecution near-impossible. If an officer feels threatened and it can’t be proven that they meant to kill you, they can get away with it. To convict an officer of murder, you have to prove that at that moment in time, they intentionally murdered the victim and prove that the officer did not really feel threatened.

During the last legislative session, Representative Luis Moscoso (D- Mountlake Terrace) introduced legislation to strip the language in question. The legislation was quietly killed in committee. Instead, we have a Task Force that will meet four times and issue a report.

Tukwila City Councilmember De’Sean Quinn described the task force as feeling “like a dog-and-pony show”, as thus far the task force has focused only on officer training. Instead, some members believe their work should explicitly be discussing the issues leading to civilian deaths by police.

During the meeting at Keiko’s, Ms. Hasegawa, the mediator of the meeting recognized Officer Cynthia Softli, a representative from the Black Law Enforcement Association of Washington. “I don’t want people here to feel uncomfortable”, said Officer Softli, who admitted that there’s a definite tension on this issue within the law enforcement community and between Black communities and their community members in law enforcement. Officer Softli pledged that she was there to listen and to be helpful.

The room reflected a diversity of opinion, experiences and ethnicity that is rare in political and organizing circles in Seattle. The attendees outlined a number of concerns with police: accountability, local vs. non-local, hiring, training, the hiring of more officers of color and women, and accountability in reporting of police brutality. All of these were important issues, and some caused more controversy than others. But all agreed that the next task force meeting must address the issue of use of force.

As Ms. Hasegawa did a time check, she signaled the final purpose of this meeting: mobilizing the community to push recommendations for legislation to regulate the use of deadly force by police officers. “Everyone in this room,” she said, “is a stakeholder in correcting this regulatory oversight and changing how policing is done in Washington.”

Task force co-chair, Representative Roger Goodman (D-Kirkland) has set the next task force meeting in Olympia for September 13th. It will be a 9-hour meeting to discuss the issue – with public comment towards the end. Gerald Hankerson, president of the NAACP, hopes the next meeting will finally bring a public outcry at the delay and a significant step toward reform.

Community members at last night’s meeting agreed: it is our job to take action on this issue. Ms. Hasegawa and Councilmember Quinn urged Emerald readers to get involved in the discussion in any of the following ways:

Call the Office of Governor Jay Inslee to demand the task force address police use of force.  360-902-4111

Send an email to any of the following legislators on the task force to demand the topic of police use of force be discussed:

Share your concerns openly on Social Media and put pressure on the task force.

Attend the meeting. The next meeting of the Task force is Tuesday, September 13th from 8:00am to 5:00pm on the Capitol Campus (the specific hearing room has yet to be announced). Those who are interested in attending and testifying on the issue can apply here once the meeting time and place is posted.

Those at last night’s meeting agree the epidemic of police violence against underrepresented communities, communities of color, and particularly against Black bodies needs to end. Enough is enough. The community expects nothing less than the sensible regulation of the use of force by police.