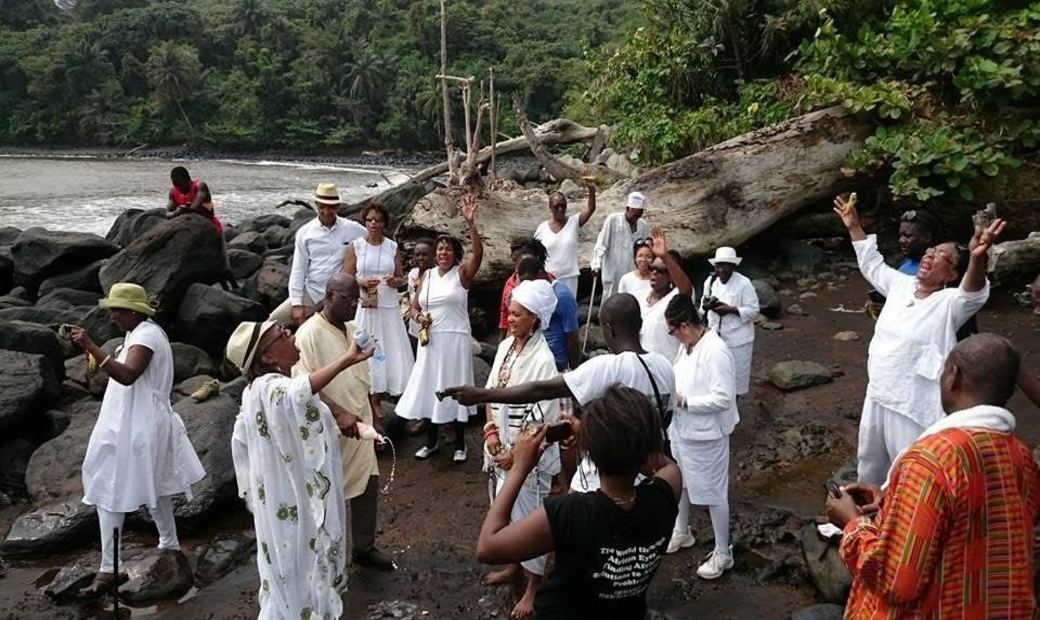 Reconnection. Healing. Building bridges. These are but a few of the many ways to describe the powerful “Pilgrimage to Bimbia Film, Exhibition and Presentation” that took place last Thursday evening at the First AME Church Fellowship Hall.  The room was teeming with community members eager to hear Dr. Lisa Aubrey, Fullbright Scholar and Professor at Arizona State University and University of Yaounde I, and Mr. Alain Kenfack, CEO of Valeurs d’Africa, share their extraordinary work unearthing the remains of port Bimbia, a Cameroonian site that played a key role in the transatlantic slave trade.  The duo also brought an exhibition from Cameroon that recently concluded its run.

Opening with a moving African ancestral ceremony and a welcome from LueRachelle Brim Atkins, Co-Chair of the Sarah Allen Sisterhood (SAS) of the First AME Church and one of the organizers of this event, the presentation began with recounting the mission that brought several Seattle women from SAS and the Seattle Limbe Sister City Association (SLSCA) to Cameroon last January.  Along the journey to provide 1200 feminine care kits to young girls, the delegation met Aubrey and Kenfack who took them to Bimbia to visit the enslavement site. “Being in the midst of my original house brought me a spiritual connection I have never known,” Oveta Hunter, one of the members shared with deep reverence. “I was reborn, so to speak.  I have returned home.”

The notion that African Americans now have access to a site that could reconnect lost ancestry was one of many findings Dr. Aubrey, who now lives and teaches in Cameroon, shared with the audience. “Bimbia is not only Cameroonian history or Diaspora history, its global history,” she stated. “This is about our roots and reconnection.” She also shared there are no “accidents” when it came to meeting the delegation from Seattle, since Limbe, Cameroon is Seattle’s sister city.

Dr. Aubrey shared that Cameroon was victim to the transatlantic “slave trade.” Countless free Africans were captured in 200 enslavement ships and forcibly transported to 30 countries outside Cameroon.  Counter to what many believe, murders of African people did not begin on the slave ships.  Instead, many women and children were murdered at the port as men were forced onto ships.  “Bimbia is a cemetery,” she said, hauntingly. “Many people do not want to visit because the pain is too deep. The elders talk about terror, murder and fear – the Maafa, the African Holocaust – not the slave trade. We must call things what they are. Those were not slaves; they were free people.” 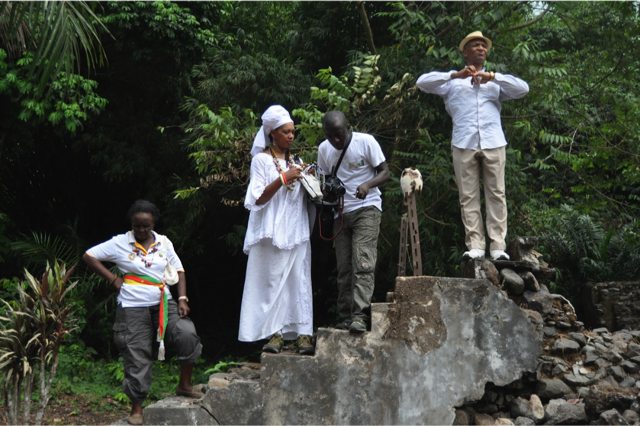 As Dr. Aubrey spoke of this violent past, she also delivered a message of hope. “Bimbia is an opening to unearth history. It’s an opportunity to come to terms with what happened and to make things right.”  She hopes this work will bring greater exposure to the history of enslavement in Cameroon and to attract financial support so important findings and continued research can be globally disseminated. “We want to give people opportunity to get inside – to feel and see themselves as a way to reckon with this history.”  Aubrey believes the work has power to connect people across “creed, color and religion” to have conversations where we finally say, “the elephant is in the room.”

Audience members have reason to believe this discovery can lead to global healing. Dr. Aubrey and her colleague, West Cameroonian native and international journalist and magazine publisher, Mr. Alain Kenfack, have a deep commitment to ensuring their discoveries are shared through his international magazine. They will publish the rich lessons that Bimbia has to teach. “We need more support for his magazine,” she said. “So many people tell us how much they appreciate it.”

Event-goers also received the rare opportunity to see Aubrey’ and Kenfack’s exhibition which included his magazine, films, artifacts, photos, research snapshots, listings of slave ships and their destinations as well as works from Cameroonian, French and Caribbean artists depicting their expression of Bimbia.  Haunting visions of men in shackles reminded all of us that facing Bimbia’s wounds offer us a chance to grieve our history and embrace a future where reconciliation is possible.

The exhibition, which concluded August 29, included artwork rich with African imagery and history from several local artists: Michelle Moore, Eric Salisbury, Carletta Carrington Wilson, Roosevelt Lewis, Vincent Keele, Bonnie Hopper, Chevonne, and Carol Rashawnna. Mr. Jean Ndoumbe, a film-documentarian shared his film, Journey to Bimbia, capturing the trip to Bimbia by members of the SLSCA. Community scholar, storyteller, and event sponsor, Delbert Richardson’s “American History Traveling Museum: Unspoken Truths” also contributed a powerful display to educate about ancestral roots. “I have been waiting for Dr. Aubrey and Alain for 11 years,” said Richardson. “We have been missing our collective history. Our history has been told by one lens.” He explains their work now offers a whole lens that includes what slavery was like on the continent of Africa.

The healing ambiance of the evening was further amplified by music and dancing. Singer, Josephine Howell brought the audience to their feet with “Lift Every Voice,” then sang to our collective sense of empowerment through the deeply powerful lyric, “Soon I will be done with the troubles of this world.” Daughter, Chyee Howell added to the spirit of liberation when she sang, “March on people, let them know we’re equal, stand never let them hold you down.” Closing performances included a beautiful traditional African dance by Nailah “Oni” Harris while Ade played the drums in rhythmic joy.  The Zambuko Marimba Ensemble ended the event with traditional marimba songs of Zimbabwe, moving every person in the room to dance in celebration.

Those interested in learning more and donating to Dr. Aubrey and Mr. Kenfack’s work should contact them at rootsreconnection@gmail.com. Special thanks to event planners: First African Methodist Episcopal Church (Seattle), Sarah Allen Sisterhood Women’s Ministry and the SLSCA, the Association for the Study of Classical African Civilizations, and the Saturday Sewing Sisters.

Melia LaCour is a native Seattlelite with a passion for writing, race and social justice activism and all things healing to the planet!

All photos courtesty of Alain Kenfack

One thought on “Pilgrimage to Bimbia: The Forgotten Door Exhibition”