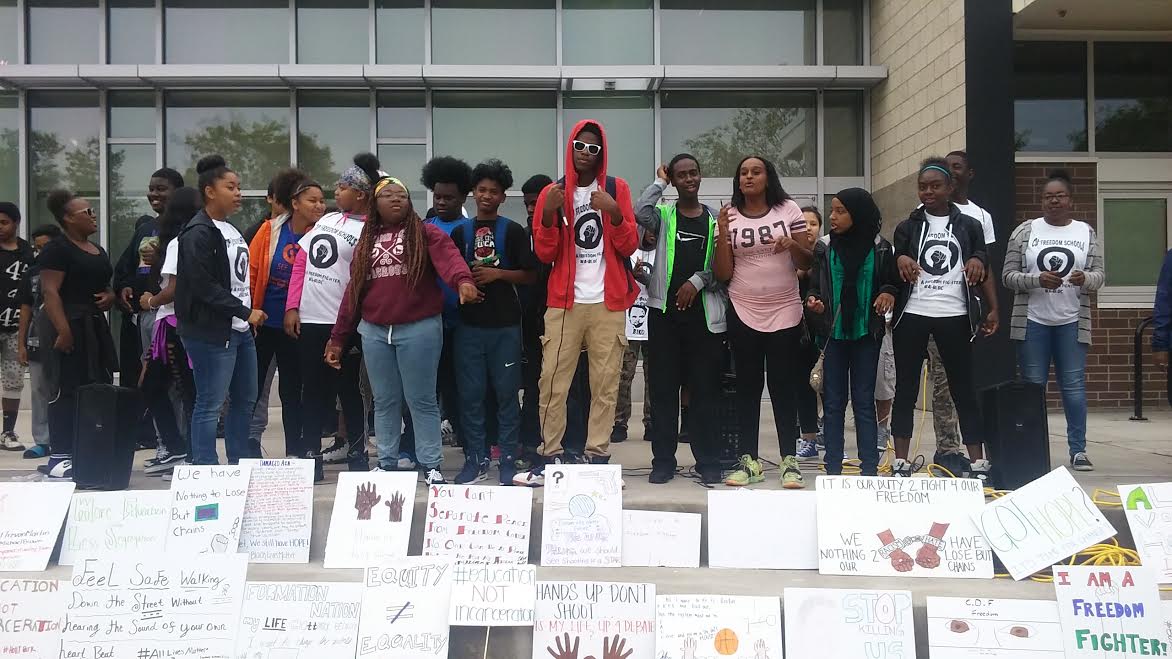 It was billed as a party but it served as a funeral.

The deceased? All the bleak images of South End youth sketched from SPD Blotter entries and KOMO crime report.

The gravediggers? Nearly 60 local teens starved to be seen not as portrayed by an indifferent media, but as they are.

It’s a shame then, I found myself one of just a handful of people over legal drinking age two weeks ago at the Rainier Beach Community Center. I was there to witness an assemblage of South End youth command its courtyard for nearly four hours chanting hymns of collective resilience, free-styling raps about self-empowerment over hip-hop instrumentals belonging to Drake and reading from legendary civil rights texts. 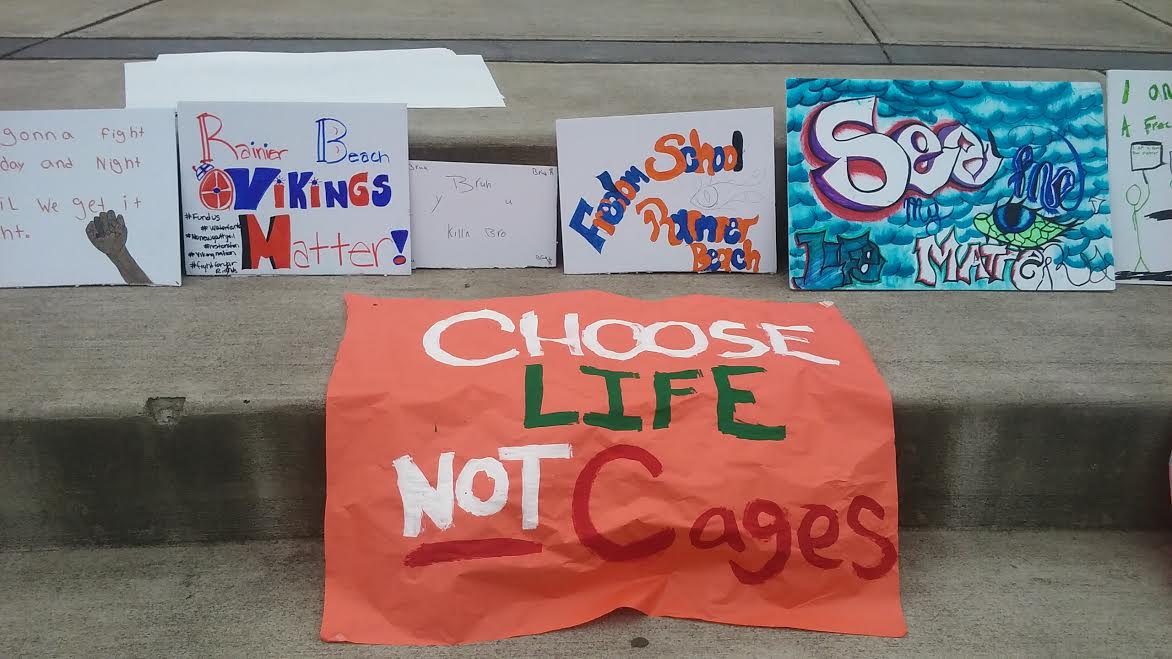 The occasion was a raucous “Bloc” party in a culmination of the second annual Children’s Defense Fund Freedom School held at Rainier Beach High School. Rainer Beach High School 9th and 10th Graders had freely given up the previous six weeks of their summer vacation to engage in a rigorous curriculum replacing the traditional 3 R’s of education with 3 new ones: Revolution, Radical Re-teaching of history, and Restorative Justice.

Their packed classrooms saw Baldwin’s Go Tell it On The Mountain replace Hemingway’s For Whom the Bell Tolls, and Angela Davis’s gospels of freedom substitute for Thomas Paine’s tomes on liberty.

Along with AFSC’s Freedom School held at Bethany UCC Church in Beacon Hill in both the winter and summer, Rainier Beach’s CDF Freedom School has carried on the tradition of the temporary, alternative schools catered to Black children first birthed in the mid-1960s in response to segregated public schools in the South.

Present day, they function locally as a supplement to the public school education;  an education many Freedom School students see as incomplete, producing a curriculum that leaves many of them left out and behind.

“My ultimate goal is to see the education system completely flipped upside down and changed, eradicated and a new system built up,” says Moriah Williams, a freedom school teacher, or servant leader as they’re called, who lives in Rainer Beach just blocks away from many of her students. “I have 3 Muslim students in my class and so we talk about Islamaphobia. Here we make sure the curriculum reflects the students and also the world.”

Freedom Schools also serve as incubators for community organizing. Only last year, students from Rainier Beach’s Freedom School staged a Transit Justice Campaign challenging Seattle Public School’s 2-mile walk zone policy that requires students living within 2 miles of their school to walk or pay for public transportation. Their months of organizing and agitating at the city level saw the district partner with the City of Seattle to provide 3000 free ORCA Cards to high school students who otherwise would have had to find their own way to school, a victory for pre-millennials routinely maligned for their lack of civic engagement.

This year’s crop of students seemed primed for big things as well. The morning of the block party saw them march down Rainier Avenue and Henderson street, chanting in flawless unison: Got Freedom, Got Love, Got Hope! All the while they carried classroom-made signs that read “Guns Stand Down, Racial Equity Up” and “Equity does not equal equality.” 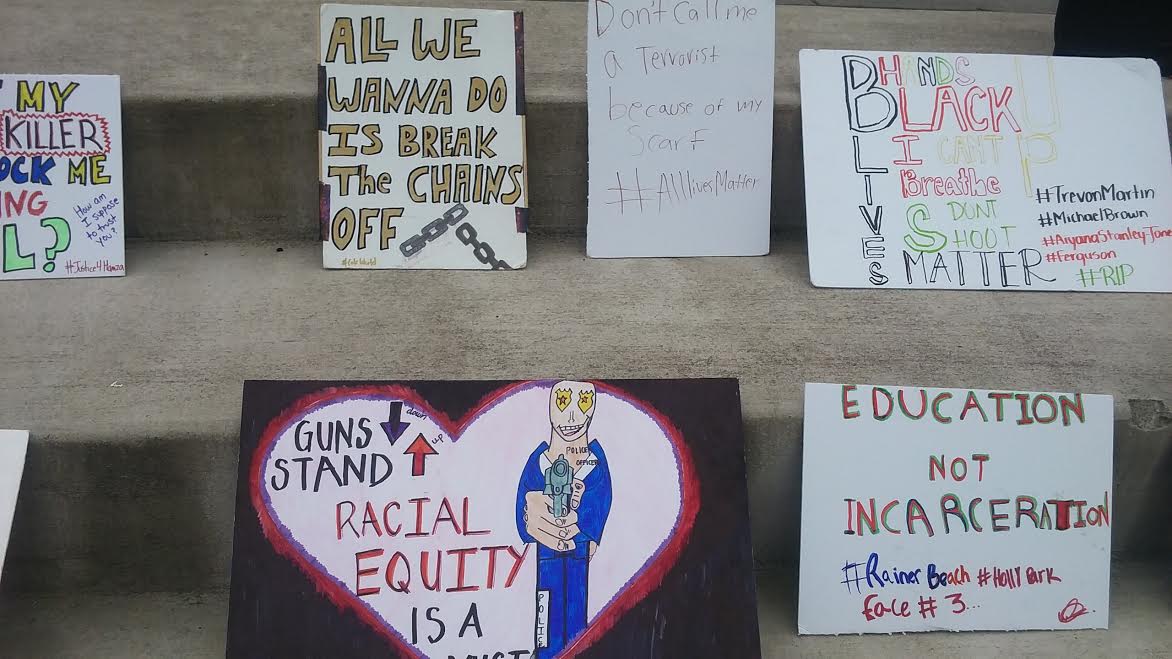 As the late morning clouds above refused to burn off, students eventually ended up in the community center’s courtyard, flooding it with more signs, and art installations.

The installations, created as projects of the Freedom School,  ranged from a community inspired pictorial of community members holding signs stating why their life mattered (one response was: because I have 5 mouths to feed), to a casket covered in shattered mirror shards prompting bystanders to reflect at their own image in the casket and question their own roles in perpetuating or dismantling systems of oppression, to a “Rest in Power Wall” collage depicting those lost to violence during the past two years including former Rainier Beach student Hamza Warsame and Sandra Bland. 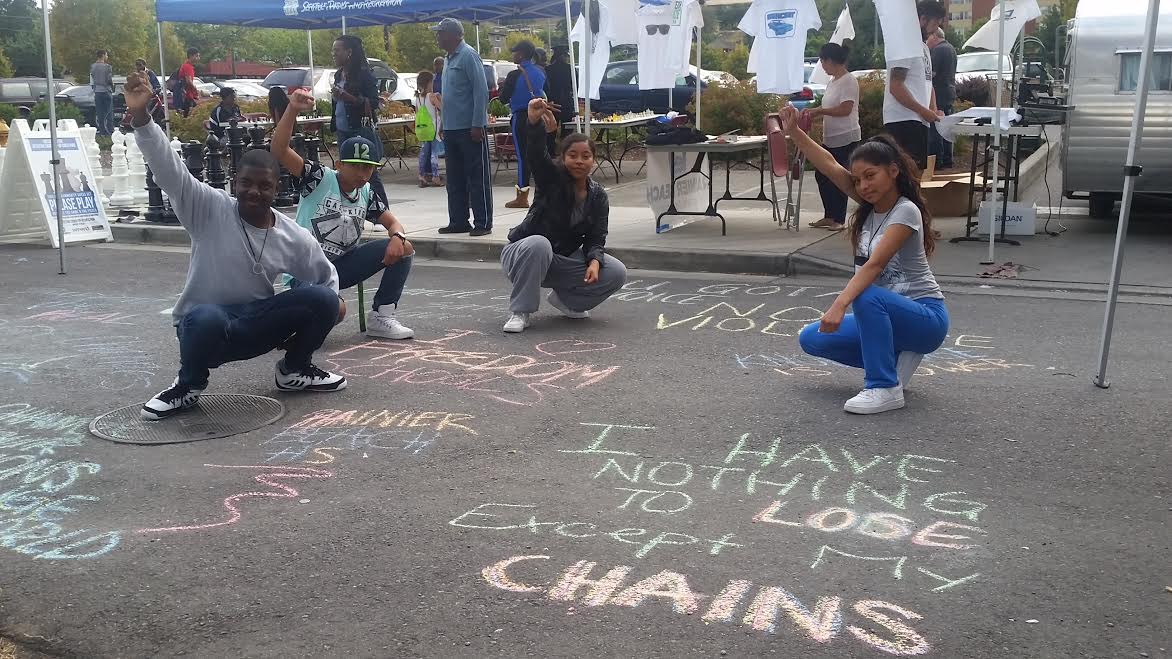 Men and women waiting at the bus stop in front of the community center looked on quizzically, some smiling as one by one the students took to the courtyard stage for Harambee. Harambee – Swahili for “joining together” – saw youth call out each other for what they had done for each other during the six weeks of Freedom School, whether teaching a person to dance or assistance with an assignment.

“What you see in the news doesn’t capture who our youth truly are. They’re here today in part to reclaim the narrative of their lives,” said Laura Wright Landrum, Project Director for CDF Freedom Schools at Rainier Beach High School and Co-Founder of WA-BLOC, a newly formed non-profit that launched a grassroots funding campaign to host the CDF Freedom Schools at Rainier Beach this summer after a lack of funds threatened to cancel the program.

Speakers soon pulsed with beats familiar to any hip-hop aficionado. Thankfully, instead of Jay-Z rattling off yet another trite tale of acquired riches, the students inserted their voices over the tracks, taking turns rhyming about reading books, starting businesses in Rainier Beach and committing to snuffing out gun violence in the community. 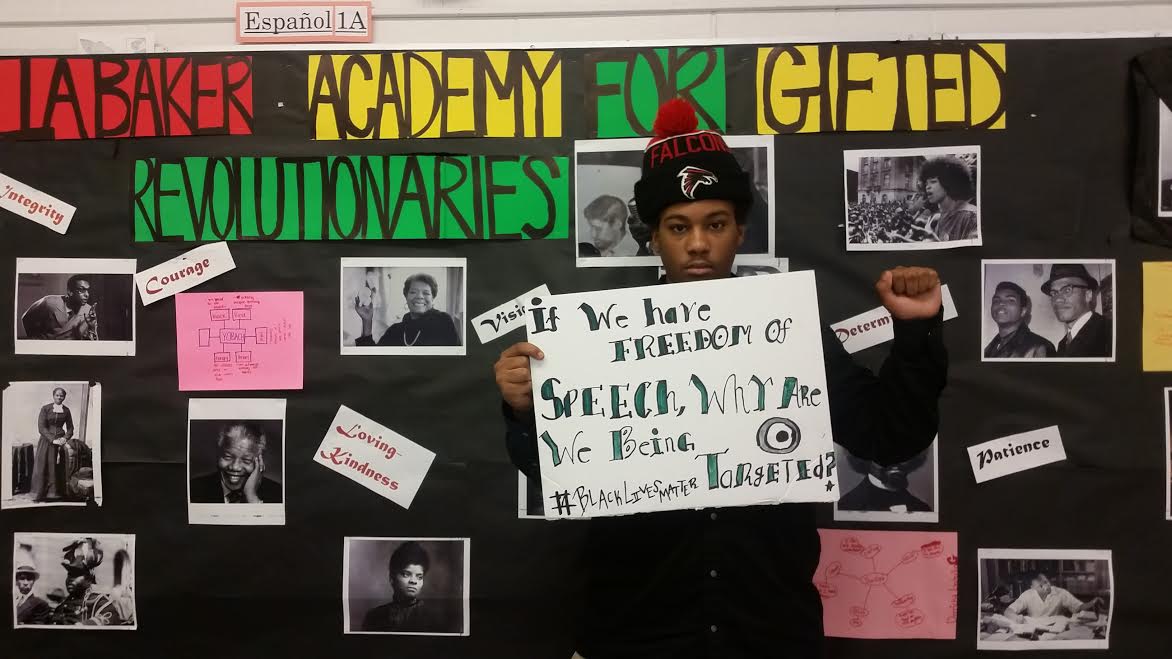 Some of them, self-admitted wallflowers before Freedom School, couldn’t fathom they’d ever be taking part in any activity requiring high degrees of vulnerability.

“It really helped to build my confidence because I was afraid to speak in front of people before,” said Naimo Yusuf, who indeed addressed her fellow students during the Bloc party to mighty applause.

But she, along with the rest of her cohort, received more than just public speaking skills from her six-week tutelage. Freedom School also imparted Yusuf with an obligation to be change agent in the South End community.

“I realize now how we [as youth] are very important to our community. All people in this community matter,” says Ali Abdi a first-year freedom school student and incoming freshman to Rainier Beach High.

Abdi also said he planned to take the lessons he learned about equity and community -reliance over the course of her time and share them with both peers and adults alike in the South End.

The majority of Freedom School students appeared to share Ali’s mindset of sustained community engagement, as they concluded the Bloc party by venturing throughout the Rainier Beach and Brighton neighborhoods introducing themselves to community members they’d come across to share what they learned at Freedom School.

As I departed I caught a glance of one of the art installations I had missed earlier in the day.

It was a non-descript square mirror with a sticky note attached and four words scribbled on it:

What do you see? It asked.

As the laughter of youth surrounded me and impromptu chants filled the air as students made their way, I watched one young woman pick up a sign that read, “Yes… All Lives Matter but We’re talking about the Ones that Are Ignored.” I then counted the number of adults in attendance who weren’t associated directly with the youth on one hand.

And when it came to our community as a whole, I couldn’t help thinking: 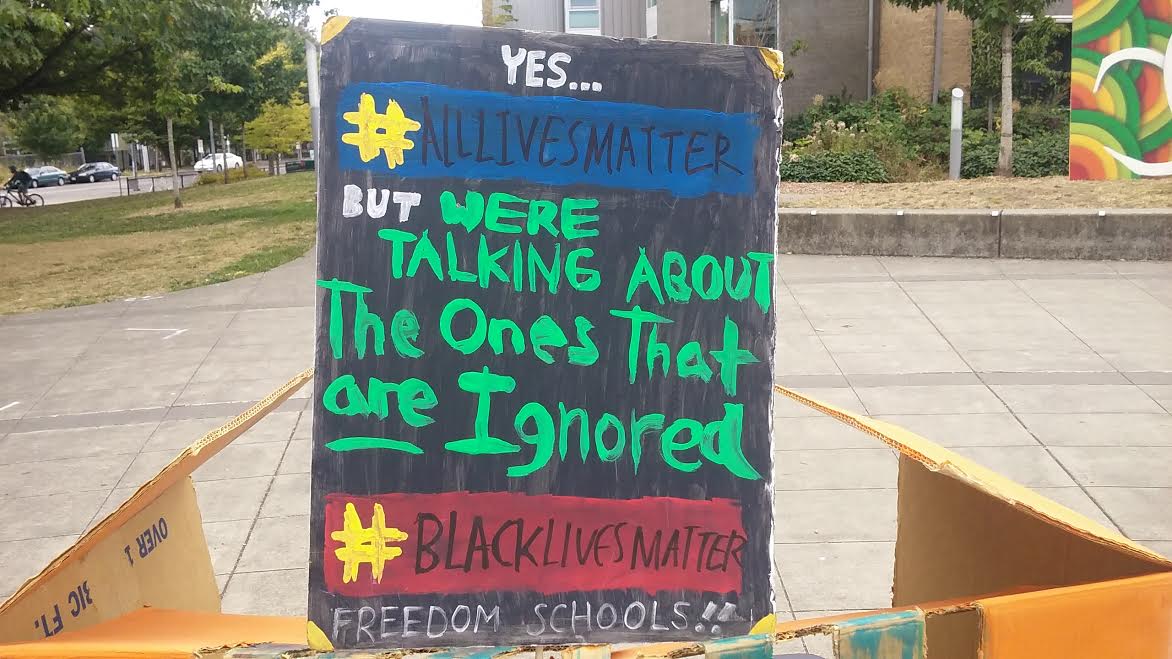 Marcus Harrison Green is the editor-in-chief of the South Seattle Emerald and a Rainier Beach resident. You can follow him on Twitter @mhgreen3000.

One thought on “Struggle to Be Seen: Freedom School Students Reclaim the Narrative of Their Lives”