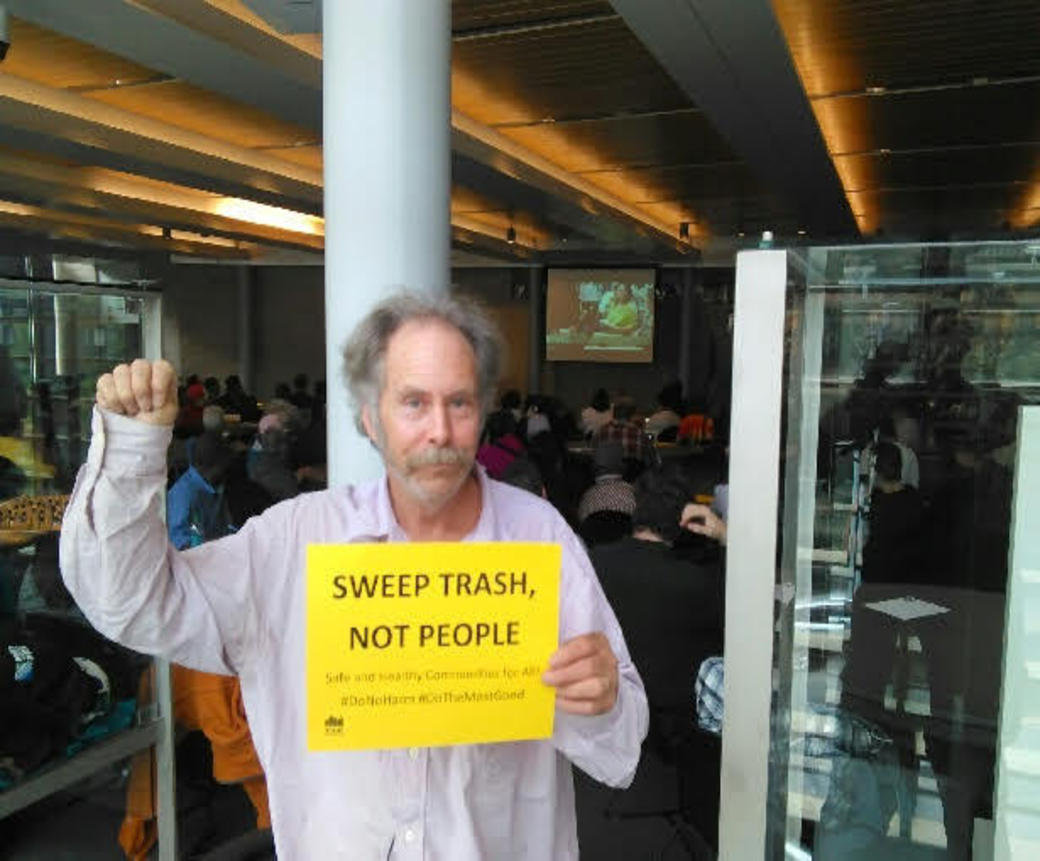 The housing crisis has hit no one harder than the 4000 Seattleites that experience homelessness every night. Recently the “sweeps”, or rather the removal of homeless encampments around the city, have caused controversy and been described as “inhumane”. Today, 300 people gathered at the City Council chambers to support an ordinance regulating such clear-outs of the encampments.

Councilmembers Mike O’Brien, Kshama Sawant, Rob Johnson and Lisa Herbold introduced the legislation which was was referred to the Human Services and Public Health Committee to implement the legislative process. The legislation would allow for encampment clear-outs (i.e. “sweeps”) under specific conditions that would, according to a statement by the Council’s press office, “[protect] public safety and [connect] the unhoused with permanent housing options”.

In the same statement, the Human Services Department reported that “out of 441 cleanups since the declaration of the State of Emergency on Homelessness last November, only 126 people were connected with shelter or housing”. The lack of outreach frustrated protesters such as Laura Bernstein of the Tent City Collective who told the Emerald, “as long as we have a housing shortage, we have no business sweeping the homeless off the streets”.

The same frustration and outrage was present in the testimony of Susan Russell, a chronically homeless resident of the city who declared, “I’ve been homeless for 10 years…how long do I have to wait”? Homeless advocacy groups from all over the city were present alongside homeless people who came to testify, including: The Tent City Collective, Vocal-WA, the Public Defenders Association, the ACLU, and Seattle Community Law Center.

The ordinance was originally drafted by the Columbia Legal Services and other housing advocates. The ordinance would establish the following things while clarifying the City’s role in managing and clearing encampments:

Allow outdoor living spaces in unsuitable or unsafe locations to be cleared with 48 hours notice and the City must offer an alternative location for people to relocate;
• Prohibit camping on sidewalks, rights of way, school grounds, private property and highway overpasses, among other unsuitable locations;
• Clear out hazardous outdoor living spaces with 30 days written notice and provide alternative options for living spaces;
• Qualify living spaces that have garbage accumulation and/or presence of unsanitary elements as hazardous. Before clearing out the space, the City must first attempt to remedy the hazardous situation (for example, garbage containers, sharps containers, portable restrooms);
• In the case of removing personal property, it will be cataloged and kept for a minimum of 90 days at storage locations accessible by public transit which operate beyond normal business hours;
• Establish a 10 member advisory committee to provide recommendations on the City’s ongoing removal and impounding actions;
• Push for considering other further amendments through the Council’s legislative process.

In opposition to this ordinance, some linked the homeless encampments with crime in the area; particularly, in the International District and Sodo. Peter Kuang, the owner of the Greenleaf Restaurant on 8th Ave S in the International District, described his worries about seemingly supporting the encampments and the presence of homeless people in his neighborhood. “[People] are worried about trash, worried about harassment,” he said. When asked about his and other business owners suggestions about what should be done Kuang said, “[the City should] find a better place to move them to…you can smell urine two blocks away, there’s lots of crime happening.” A number of homelessness advocates denounced the linking of spaces for homeless or the homeless themselves to crime as stereotyping.

In addition to concerns from the business community, Councilor Burgess expressed concerns in a statement to the press that the ordinance would, “[tip the] balance decidedly away from our public health and safety responsibilities. It essentially establishes a new right to camp on public property throughout the city….It mandates that the city must provide sanitation and garbage services at any encampment that requests these services.” Another statement from city hall does clarify concerns about random encampments by outlining where they are prohibited. The services the city will have to provide, according to a press release from City Hall, are basic health and safety services.

One of the speakers, Tyrone Kenney was homeless for eight months before he found housing. Originally from Georgia, he recently moved into transitional housing. “There’s no way in the world people have done so much wrong that they don’t deserve a home,” he says. His partner, Yvette Dinish stated that a Housing First approach, similar to the one that her and her partner benefit from, is “a step up, not a step back” in contrast to shelters and short-term housing solutions that many utilize.

An activist from the East African community, Abdi Mohammed, expressed his disappointment with the Council and the City in their handling of the homelessness crisis “without a tangible solution to create affordable housing.” He went on to characterize his deep frustration with the phenomena of people from his community being displaced into South King and Pierce County: “Remember in South Africa where you could work in the city but you couldn’t live there. What kind of society do we have if you’re a janitor cleaning a building in a city but you cannot live in that city?”

The ordinance was seen as a start by many in the community. One speaker, Megan Murphy, said, “housing is a human right; yet here in the City of Seattle we have over 4000 without shelter….chasing people over the city won’t solve the problem”. Murphy’s sentiment was echoed throughout the meeting’s testimonies, until Council President Bruce Harrell cut off public comment for other council business.

The ordinance is currently on the schedule for consideration by Councilor Bagshaw’s committee, who committed to have legislation ready to vote on at the end of the month due to the health hazards posed by the onset of winter and deadly exposure to the elements.