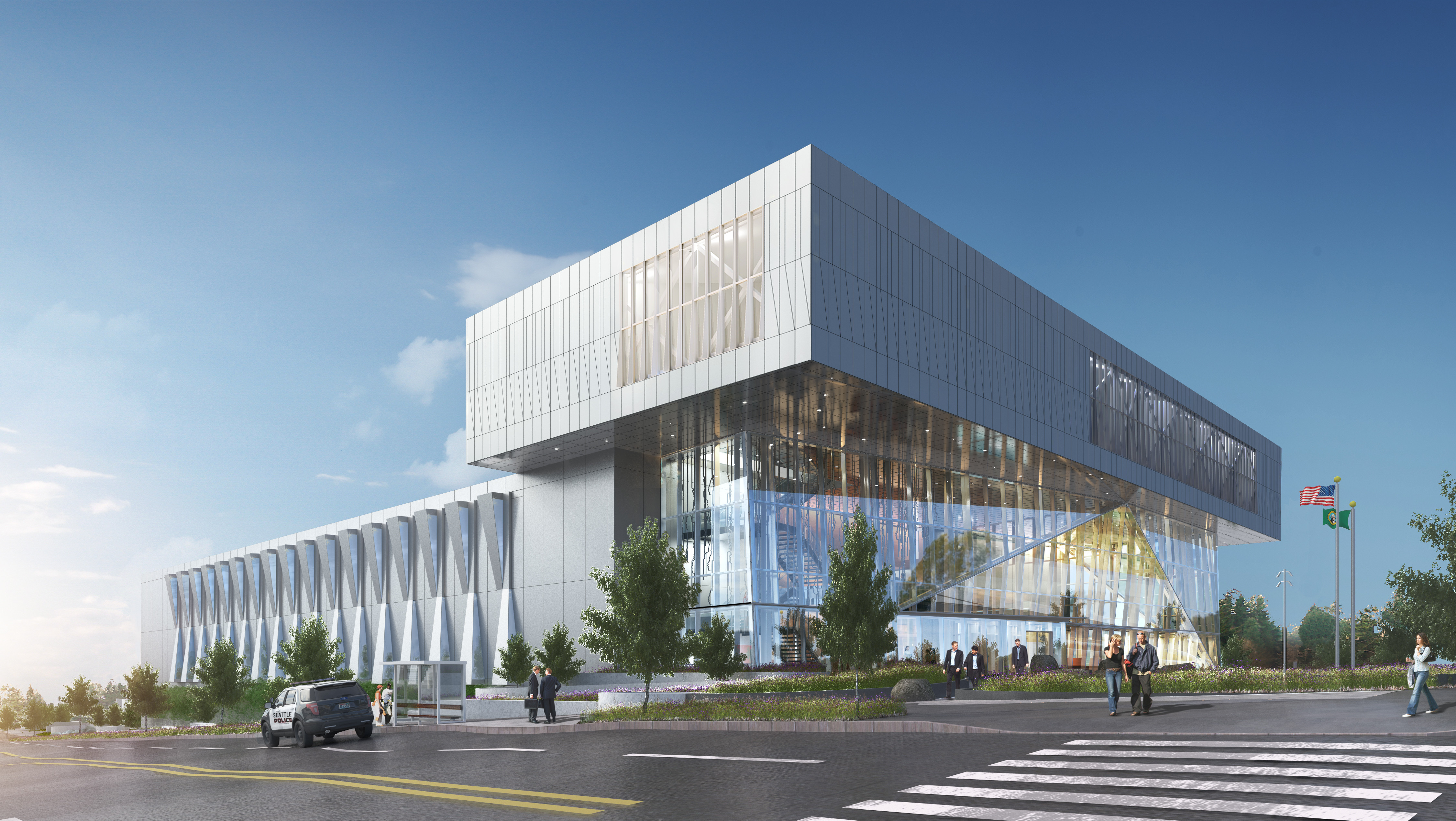 Yesterday morning I went on a tour of the North Seattle police precinct station with a group of journalists, activists and community leaders organized by city councilmember Kshama Sawant.

The purpose of the outing was, of course, to see whether the current precinct is so outdated and overcrowded as to warrant the construction of a $149 million new facility (i.e. the Bunker).

The SPD is eager to push this narrative as you can see by the very first line of text on the precinct’s webpage:

It’s kinda like when you say “what’s up” to someone and they immediately launch into all their problems. Dude, can you at least say hello first?

Knowing the city’s keen desire to get the Bunker built, I definitely expected to see some SPD stagecraft to sell the dilapidation of the building, a sort of reverse-Potemkin village. Our tour was led by Chief Operating Officer Maxey, Captain Sackman and Lieutenant Robbin. They were joined by Doug Carey of Financial and Administrative Services (FAS), the department that’s dead-set on ramming through the Bunker, a hearty grubstake for them. (The homeless purges are also part of FAS’s portfolio.)

The officers adequately concealed the fact that they’d rather be doing literally anything else, especially as Kshama peppered them with questions right out the gate about their policies around the use of riot gear—er, “demonstration management equipment.” Cops’ individual bags of “unusual occurrence gear” are stored in a temporary-turned-permanent room that was put up to separate the lobby from the front window after a drive-by shooting in the mid-‘90s.

Kshama has a way of prodding city functionaries with adversarial questions while remaining unfailingly civil and direct. It can get mildly uncomfortable and even tedious, which is exactly what you want from an elected official pushing for accountability on your behalf. The officers’ answers were brisk and courteous and hewed carefully to the party line—occasionally one of the officers would interrupt another to offer more nuanced boilerplate.

We were led through the office area with its standard institutional furnishings: overhead fluorescent lighting, acoustic ceiling tiles, drywall. Desks are shared between officers across three different shifts, we were told. The warren of cubicles was cramped, homely and provisional. Some had little personal flourishes:

We looked at the break room and the parking lot, then we proceeded to the holding cell area, which was smaller and shabbier than I expected. Next we visited the basement firing range, definitely the most macabre part of the tour. This is where police practice shooting perps, which is ultimately at the root of why we’re all here in the first place.

Several people of color in the group cut me grave, pointed looks. It is not a pleasant room. One of the shooting stalls was out of order, cordoned off sloppily with police tape, and shells were scattered on the floor in the next stall. The officer explained that the range wasn’t of sufficient distance to be used for training and certification purposes, so it was mostly just used for basic skills practice.

I spotted a paper target in the garbage (“scowling mustache man with a pistol”) but Timothy Harris of Real Change ganked it before I could, quickly folding it up and shoving it in his back pocket. You can’t bring us anywhere.

In the basement-level gym (a private facility outfitted by cops with exercise equipment and funded with their membership dues) we saw the oft-discussed North Precinct Flood Zone. A grate in the corner burbled with the sound of a continually-running sump pump; the precinct was built on wetlands around Thornton Creek and drainage has always been a problem.

We returned to the main floor and checked out the locker room, a converted former meeting room separated from the lobby by a large, opaque sculptural glass wall (ironically dedicated by the artist to Mahatma Gandhi). Rows of broad, full-length lockers were decorated here and there with stickers that offered our most authentic insight into cop culture: Rockstar Energy Drink, MudJug brand portable spittoon (their website prominently displays “Blue Lives Matter” merchandise), “If I’m Standing On It, It’s America,” “Stay Safe At Night, Sleep With A Cop,” and Calvin pissing on the Obama campaign logo. (We weren’t allowed to take pictures in the locker room, the holding cell area, or the breakroom for security/privacy reasons.)

I will agree that the current precinct is crowded and cluttered. Some of the hallways and corridors between cubicles are less than two arms’ width, and the building has the overall feel of a facility that’s outgrown itself. On the other hand, I didn’t see more than two dozen people in the building and plenty of vacant workspaces; it’s not like cops have to sit on each other’s laps to file reports. It’s somewhat cramped but not “badly overcrowded,” and I certainly wouldn’t describe the place as “decrepit” or “falling apart”; it’s mildly anachronistic but clean, like many government offices.

Overall the precinct has the makeshift, lightly timeworn feel of a mom-and-pop shop, as contrasted with the crisp, modern Apple Store/Costco vibe of its proposed replacement. The gap between the two is so stark that it begs the question: Why does the new precinct have to make such a quantum leap?

It’s like moving out of a 1000-square foot house into a mansion with a bowling alley in the basement. It’s like replacing a beat up but still-running 1998 Volvo with a 2017 Porsche. That’s a bold move when you haven’t bothered to clean up your credit rating.

Concerns about the “badly overcrowded” current precinct (debatable but not without some merit) are completely overshadowed by the $149 MILLION PRICE TAG. Even setting aside the berserk spending priorities at play in erecting a national showpiece at construction boom pricing in the midst of a massive homelessness crisis, I can’t see how this slightly scruffy 14,000 square foot precinct needs to be replaced with something as opulent as the 60,000+ square foot Bunker.

$149 million is almost double what we paid for City Hall, or slightly less than the cost of the Central Library, designed by Rem Koolhaas. Hell, it’s 50% more than Paul Allen, a billionaire, paid to build the EMP. The Bunker was designed with a wish list and a blank check, but right now the SPD should be clipping coupons and saving receipts.

We gathered for questions, first in a briefing room and then out in front of the building.

Ijeoma Oluo asked, How can you claim to need more space both to store riot gear and to get closer to the community. Aren’t those two goals opposite on another?

Timothy Harris asked: “Why didn’t you take us on a tour of the even larger building you’re in across the street?” The SPD leases an additional 15,000 square feet of office space for detectives nearby, which was not included in our tour. This question didn’t get answered.

The officers, by the way, bristled at any use of the term “bunker.” COO Maxey quipped, “If we wanted to build a bunker it’d actually cost less! We wouldn’t have all those windows—concrete blocks are cheaper.”

The officers said “Okay, one last question,” at least five times, and “we really gotta wrap this up now” at least three and also “we’ve got to clear out, there’s a new shift coming in soon.” Did anyone in the group feel bad taking up two hours of their day on this due diligence mission? No, they did not. Maxey should get used to doing a LOT of talking about this proposed new palace.

To be fair to the North precinct crew, I don’t blame them for wanting better facilities. However, the most crucial questions asked today were above the officers’ pay grade. They’re philosophical questions about necessity and spending priorities and the possibility of reform. They’re questions for the councilmembers who will fund the Bunker, not its hopeful future occupants.

Brett Hamil is a Mt.Baker resident and regular contributor to the South Seattle Emerald

One thought on “Touring the North Seattle Police Station”