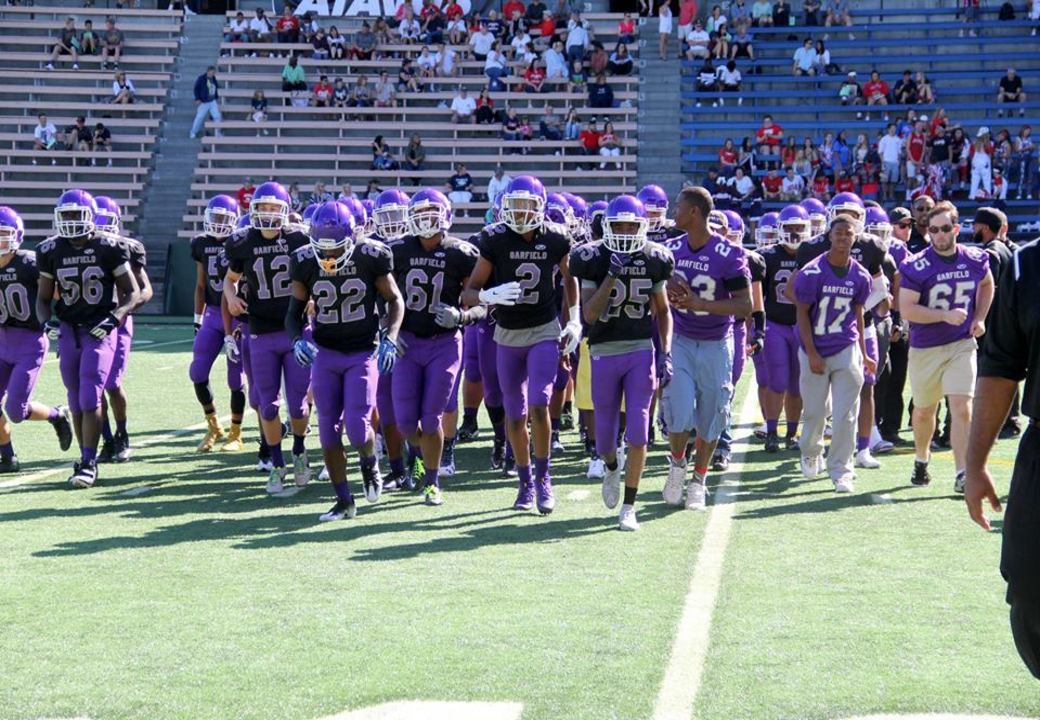 That’s the story Garfield High School Football players wish to have told after their planned action tonight just prior to their league opener against West Seattle High.

At 7pm the national anthem will begin to play, and as most in attendance at Southwest Athletic Complex will rise reflexively to honor the American flag as soon as those familiar notes pierce their ear drums, each young man on Garfield High School’s Varsity football team with remove his helmet. He will   then kneel in unison next to a teammate to silently protest the ongoing racial oppression and systemic injustice taking place in the United States.

Some might attempt to dismiss their actions as blind, juvenile copycatting of those taken by San Francisco 49ers backup Quarterback Colin Kaepernick. But others, such as the Seattle Reign’s Megan Rapinoe, will understand. She is one of many athletes to stand in solidarity with Kaepernick in his ongoing refusal to rise for the national anthem as not “to show pride in a flag for a country that oppresses black people.”

However, their demonstration, planned by and agreed to by all of the football team without any coaxing from adults represents something more than simply the latest emulation of a professional athlete. It represents in them something far superior, an awakening of their own agency as human beings to tell their truth through action.

This is what I learned from visiting the Project Mister, a college and career readiness, class taught by Garfield’s Head Football Coach Joey Thomas.

What began as a career day talk, where my nerdish fetishism for journalism induced instant comas, morphed into an education on the power of telling your own story, with actions, rather than words.

Struggling for a microbe of participation from the dozen football players gathered in the room, I asked the class what came to mind when they heard the word “media.”

After a chorus of chirping crickets, a few brave souls finally spoke up.

Their answers murdered a bit of pride inside about my own industry, as all responses were met with agreeable heads nods from the rest of the group.

“It never tells the truth about our community.”

“They always report the bad.”

The last fact was evident when I asked for a show of hands on who had heard of outlets other than the Seattle Times and the South Seattle Emerald. Vacant, quizzical stares met me as I ticked off a list of local news outlets.

Even with that, the response that stood out the most was:

“They don’t understand us.”

It was this same media on Monday afternoon that reported the shooting of a 17 year old teen near their school, misidentifying the victim as a Garfield student, in addition to the location where he was actually shot.

In a rush to get “the fast story” many ended up reporting the “half-ass story” instead.

The students knew that associating the shooting of the young man, who actually did not go to Garfield, with their community would have reflected poorly not only on their school, but also on each of them.

“They’ll paint all of us as negative.  Anything bad that happens here is always in the paper, but there’s people who bring guns to Ballard High and that never gets reported. Someone called in a fake story about a woman having a gun outside on the football field and that was reported” a young man said.

“Mr. Green”, one of them asked me, “if the news is fake why do people still believe it?”

Before I could answer another member of the class made a through line to the plight of the scrutiny given by the very same media to a certain maligned 49er quarterback and seemingly anyone else seeking to trail his footsteps.

They watched Kaepernick, and the other athletes who followed suit have racist verbal venom spewed on them, in a refusal, an abject refusal to have the story, of what it means to live in this country individually and collectively as these students do as non-members of this country’s dominant group.

Such is a story that continues to go unheard, unseen and unrealized.

“What they’re saying about him isn’t fair,” one student said, as others shook their heads in affirmation.

Why didn’t the news ever ask why someone of African Descent (or for that matter anyone non- cisgendered, straight, white or a male) would desire to stand for an ode to a country written by a slave holding, misogynist, during a time slavery was codified in law, women had no right to vote, and indigenous members were murdered with indemnity.

The media rarely asked if the controversial third verse of the star spangled banner, which is rarely sung, is truly racist. It was the football players themselves asking that question and what catalyzed their protest.

No one asked the question to what Kaepernick was proposing: Are people oppressed in the country?

No one wants to acknowledge the full story of what it is to be treated as irrelevant by this country, as a surplus populace, wanted only for entertainment or quota fillers.

For the students in Wednesday’s class, that irrelevancy comes when your lived experience is absent or incomplete from anything read or seen, making it impossible to be fully understood when other’s attempt to tell your story.

Such was the awaking experienced that afternoon, as once glazed over eyeballs, now burned with enlightened passion as to what it means to force people who have cordoned your concerns to the underground realm of triviality, to acknowledge those concerns have now surfaced to daylight.

I have no doubt they understood “why” they were doing Friday’s action, but I’m not sure until then they knew “what” it was they were truly doing: ensuring truth is told, by actively being the teller of it, not only in words which can be shredded down by those spoken by others, but in action, which can only be suffocated by bolder actions.

It was their discovery in that classroom, that actions craft a story far more nuanced and profound than mere words can.

It was the epiphany that actions, properly executed, speak not only to character, but also as a siren to the state of a society when it refuses to acknowledge its failings.

And this newfound capacity to act, belonging to them, could yes be misinterpreted, and misconstrued in the eyes of others, but it could only be ignored for so long. That was the living lesson taught to them by Kaepernick, this man who actions drowned out the words of his critics, who could do nothing to mount a defense except pile up a mountain of more words, which he continually overcame.

The man who inspired them to ask, why does he refuse to stand? And if he, why not we? Why can’t our actions change the course of this society, get people to talk, get people to change, and maybe, just maybe change what is believed about them?

These youth have chosen not to accept being passive victims, used as caricatures to color in a story they never wished to have told in the first place.

News of the youth’s plans has already inspired some of their elders.

“I’m so very proud that these young athletes have the courage of their conviction that many adult athletes have yet to show,” said Dustin Washington, Director of American Friends Service Committee’s Community Justice Program, who does community organizing training for local youth.

Washington joined many in Seattle’s organizing community in expressing disappointment with Sunday’s demonstration by the Seahawks, when the team locked arms in unity during the national anthem. Some called it nothing more than personification of the “All Lives Matter” movement that seeks to draw attention away from racial oppression in the United States.

“Friday should give us all hope that our youth are standing up for justice in the spirit of Ali and many other conscious athletes,” he concluded.

That’s the story those young men wish to tell, that in order to stand, sometimes life requires you to kneel.

Update: Since this article was originally published, Garfield High Football Players have pledged to continue their protest for the remainder of the season and have released the following statement:

Recently Garfield High School’s football team took a knee at an evening game. In an effort to clarify their position and better articulate the thought behind it, Garfield’s Football Team held an inclusive meeting yesterday to put the team’s position into writing.

Garfield Football Team – We have increasingly heavy hearts over various issues that have been escalating in the media.
Many of us have been touched in some way in our own personal lives by racism, segregation and bias.

Through a series of open, honest and supportive conversations we have reached a team consensus and understanding.
We have unanimously decided to take a position as a team and work towards a better future together. We are going to demonstrate this decision through taking a knee at our games.

We are asking for the community and our leaders to step forward to meet with us and engage in honest dialogue. It is our hope that out of these potentially uncomfortable conversations positive, impactful change will be created.

At this time, the Garfield High School Football Team is especially concerned with the following:

Editor’s Note:  Coach Thomas asked that the names of his students be kept anonymous for the sake of their privacy.