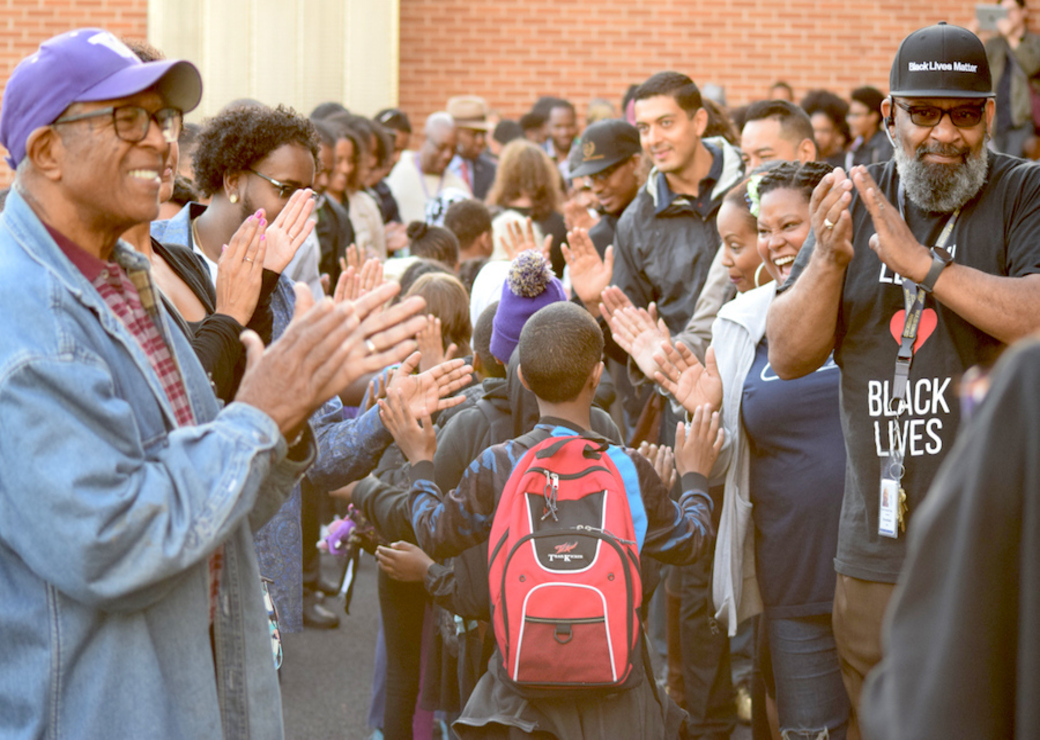 Inspired by a similar event in Connecticut, the goal of Seattle High-5 was two-fold: to stand in support of students and to make sure children see positive images of black people and people of color in their community.

Dressed in business attire, the crew of more than 80 people spanned the generations, including Bailey Adams, president of the Black Student Union at Garfield High School, former Deputy Mayor Darryl Smith, Teddy McGlynn-Wright of Seattle Youth Violence Prevention Initiative, Sheila Capestany from King County Department of Community and Health — and me. We were businessmen and women, writers, artists, youth advocates, parents and more.

Teachers lead their classes through the high-five gauntlets wearing big smiles and “Leschi [hearts] Black Lives” t-shirts. A few teachers even had tears in their eyes and traded high-fives for handshakes and said to us: “Thank you. It means so much to have your support.” While a few of the students seemed overwhelmed by the presence of so many strangers, the majority lit up to be so enthusiastically greeted.

“I got very emotional,” said Gerald Donaldson, the family support worker who co-organized the event along with his daughter Shanelle Donaldson West and author and activist Sharon H. Chang.

“We need to let our kids, our children know, our young kings and queens, that we’re here to enhance their greatness,” said Donaldson with both tears in his eyes and a radiant smile on his face. “They come to school with so much ability, so much energy that we want them to know that regardless of what is happening outside the community we have their back and we will always be there for them.”

Donaldson says the school plans to tap into the groundswell of community support to engage with the youth. “To see the smiles on their faces, to see their joy, I think its not just the impact on the children, but the people who came, the staff, I think they’re going to see that we have a whole group of people here to support them, not just our students, but them as well.”

Paola Maranan, executive director of the Children’s Alliance, was also moved by the spirit of the event. “Kids need a lot of things in their lives. They need good education. They need safe and stable neighborhoods. They need families that love them,” she said. “And they need a community that tells them that they are important and beloved and that their future is bright. So this is one way, one small way, to tell kids that we’re behind them.”

Marcus Harrison Green, founder and editor-in-chief of the South Seattle Emerald also attended, and he hopes that these kind of events will become a regular occurrence. He would be willing to show up every week. “It can’t be overstated that it does truly take a village to raise a child as the African proverb goes and today I think you saw that.”

“You saw the village, meaning the community, young old, intergenerational come out and support our young people and you know so often our black community is maligned for not wanting to participate, not wanting to build within our community and we saw today how much of a myth that really is,” Green said.

While the group was welcomed at Leschi, less than three miles south at John Muir Elementary administrators had a different response.

DeShawn Jackson hoped to provide the same message and experience for the students at John Muir, where he is a special education instructional assistant. Jackson, who has been teaching at John Muir for six years, was the lead organizer for Black Men Uniting to Change The Narrative, a similar show of support that took place at the same time as the Leschi event.

“Really, everybody is welcome, but I focus on men because in the Seattle Public Schools you don’t see very many and its very difficult to go to school everyday and not to see someone that is a reflection of you,” said Jackson (no relation to me). “We have a huge male population and we have no black male head teachers.”

Jackson is one of three black male Instructional Assistants at John Muir.

“We wanted to show that we support them and that we’re not only showing up for their basketball games and football, soccer and gymnastics, but that we also want to cheer them on for their academics because that’s important,” said Jackson.

More than 50 black men showed up, some traveling from as far as Atlanta, Georgia to greet students, despite the news advisory posted by the Seattle Public Schools canceling the event after news articles about teachers planning to wear T-shirts in support of Black Lives Matter. The district announced that they had made the decision in consultation with the Seattle Police Department.

“I know we have received lots of threats throughout the week and those threats weren’t about this event,” said Jackson. “It was more about the teachers wearing Black Lives Matter T-shirt, that’s what it was about.”

On the heels of the highly publicized Seahawks arm-linking debacle that effectively silenced Colin Kaepernick’s one-man Black Lives Matter protest, the so-called cancelation of this event feels like more of the same. Of the 200 men Jackson expected at John Muir, only about 50 came, because of the misinformation disseminated through the media.

“All the negativity that got attached to this event that had nothing to do with it,” said Jackson. “It showed a lot of people across the country that what’s going on everywhere else is also going on here and it’s not all ‘Kumbaya’ here with the liberals. There’s a lot of undertones and racist things going on here in Seattle.”

Some question whether it’s appropriate for teachers to wear Black Lives Matter shirts at school, but I wonder why wouldn’t teachers, who are responsible for educating our youth be encouraged to affirm the humanity of their students? This whole incident has me questioning if black lives matter to Seattle Public Schools or to the Seattle Police Department.

DeShawn Jackson also questioned the motives behind the cancellation.

“But my thing is you’re not canceling school, it cant be too much of a threat because that’s our most important commodity,” said Jackson. “But who better to protect the children than us. And if there’s not a threat then it kind of seems like you don’t want black men to be there because our event was always peaceful.”

Who gets cast as problematic? Anonymous racists trolls who threaten the safety of our children or black men and women who show up in service of our young people? We are once again at a reckoning where “liberal” Seattle needs to live up to its hype or fess up that we have a lot of work left to do because repeatedly white discomfort is prioritized over black lives.

And as for the John Muir kids, “They loved it. It was great,” said Jackson. He hopes more male parents will take part in the PTA and that more black men will mentor students.

“I wanted this event not only to greet these kids but to get our black men involved as well in doing mentorship and so that is what I’m hoping comes out of this — that these men come back.”

Featured image: Dozens of black professionals and community leaders came to Leschi Elementary School on Friday to greet students on their way to class. (Photo by Sharon H. Chang)