Once Seattle City Council’s Monday meeting reached items on the agenda involving a new North precinct (‘the Bunker’), demonstrations were held, tensions rose, and the meeting was adjourned — which wouldn’t be the first time. But before all that, Seattle Council Security confronted Block The Bunker activists in what was described by activists involved as “a physical assault.”

The incident happened between security and activists. Multiple witnesses and involved activists told the same story of what happened when interviewed immediately after the fact.

Witnesses and activists stated that a security guard thought activists had something threatening in one of their bags when they went to change in the bathroom. The male guard then banged on the women’s bathroom and tried entering the bathroom where women were changing clothes. At this moment, other activists got in between the two parties and wouldn’t let security pass.

Reed explained that her own group did just that not moments before and pointed out that all the people who were targeted by security were people of color. Reed turned to one security officer and said, “You guys escalated this very inappropriately.”

At one point, an activist pointed to the male security guard that began the confrontation, saying he had done things like this before.

Komalpreet Kaur Sahota, one of the female activists stuck inside the bathroom, had said she “heard banging on the door and yelling” right before there was an attempt to barge into the bathroom.

At this point in time, according to another involved Block the Bunker activist known as BiPolar, the security guard tried taking fellow protester Rashad Barber’s backpack (the pair were involved in blocking security from entering the bathroom). Then a call to the Seattle Police Department was made.

Activists immediately questioned the security guard’s right to search a bag as SPD arrived on the scene.  The police’s attempts to clear the area immediately in front of the bathroom are somewhat thwarted by insistent protestors who remain respectful but insist they will stay close to the situation to ensure protestors are treated fairly.  After a minute or two, the protestors are all allowed to re-enter City Council Chambers where they set up for their performance art protest against the proposed police bunker.

Councilmember Bruce Harrell said he was forced to adjourn the meeting when protestors began yelling at and talking over councilmembers because it was announced that public testimony would be pushed back until the end of the meeting, after votes were cast.

“You are required to speak on an agenda item and we’re showing some latitude,” Harrell said. “This council has consciously tried to show some respect for your concerns —”

“We demand more respect when our youth are dying and silenced,” interjected protester Jazmine Monet.

Earlier on, Monet and five others had given their public testimony while chained together. They were escorted by people dressed up like cops — two that were wearing pig noses — yelling demands at them. This was one of four demonstrations Block the Bunker activists had planned.

Another included Michael Volz reading the names of every person killed in Washington at the hands of police and holding up a printed photo of each face as their name was read. The crowd chanted “say their names,” after every single one. Later, flowers and battery-powered candles were strewn across the front railing by activists for those killed.

The fourth demonstration involved a reenactment of what happened at the King County Juvenile Court on September 15th when youth were apparently left in their cells as the rest of the building evacuated for a fire.

Protesters brought to life in city hall by having those dressed as cops yell to get out because of a fire at the same moment the ‘prisoners’ were yelling to let them out, screaming for help. Rose Harriot, who got up to explain what was happening, had tears streaming down her face and could barely speak.

“The very fact that we treat the youth like that is in every way unacceptable,” Harriot said. “Not only do we leave our children, black and brown and native and poor, in those buildings… While you’re in this building here ‘trying to pass reform’…You’re leaving your kids in burning buildings.”

Councilmember Mike O’Brien said he never heard this happened, but called it “appalling.”

The juvenile court confirmed that there was a fire on September 15th, but did not respond to South Seattle Emerald’s requests for comment. A King 5 photo journalist tweeted about the fire that day at around 10:45 a.m. 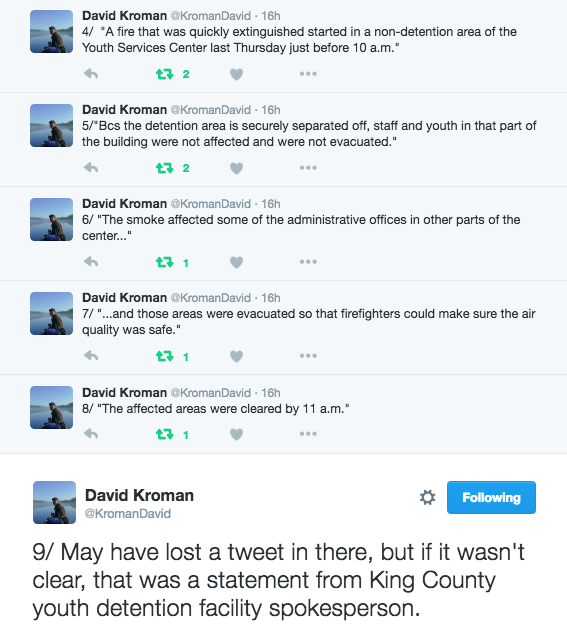 Reporter David Kroman with Crosscut had gotten some answers, however, and tweeted about the statements. The fire began in a non-detention area of the Youth Services Center (this is a bit of a misnomer — it’s the technical name of the facility, but it is a juvenile center). The statement also notes that both youth and staff in that part of the building weren’t evacuated. 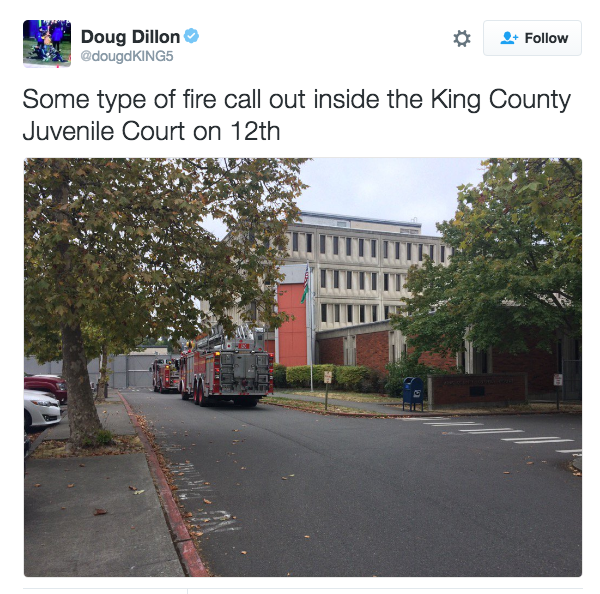 This doesn’t quite line up with the intensity that was created by the protesters’ reenactment.  Still, it’s a rather odd protocol to leave people in a building that has a known fire.

Harriot continued to speak on the issue of incarcerating youth: “We need to ask why [incarcerated] people did whatever they did…we only prove or disprove. We don’t say that they’re valuable either way.”

Like Harriot, activist Netsie Melaku had gotten the chance to offer up her public testimony before the public comment portion was closed by councilmembers. Melaku talked about living in the South end and seeing more police officers than anywhere else, specifically mentioning Rainier Avenue.

“I watched as five cop cars surrounded one 16-year-old black boy,” Melaku recounted. “He was a juvenile, they said ‘you can tell us where you live or we’ll take you to jail.’”

He chose jail, and Melaku said she didn’t blame him.

“They were contributing directly to the school to prison pipeline,” she said. “Who exactly are you protecting? The people who over police and over arrest us? Take them to north Seattle and see how that goes; maybe they can stop the heroin addiction or the domestic abuse.”

You can view the entire meeting on Block The Bunker’s Facebook page.

Councilmember Sawant said she will be holding a rally this Thursday, September 22.

South Seattle Emerald is in contact with City Hall regarding the altercation with security guards. We will continue to follow this story as more information is made available.

Kelsey Hamlin is an intern with South Seattle Emerald this summer, and has worked with various Seattle publications. Currently, Hamlin is the President of the UW Chapter’s Society of Professional Journalists, and has a second internship with KCTS 9. She finished an internship with The Seattle Times in March as an Olympia legislative reporter, and is a journalism major at the University of Washington, planning to double-major in Law, Societies & Justice (currently her minor). See her other work on her website, or find her on Twitter @ItsKelseyHamlin.