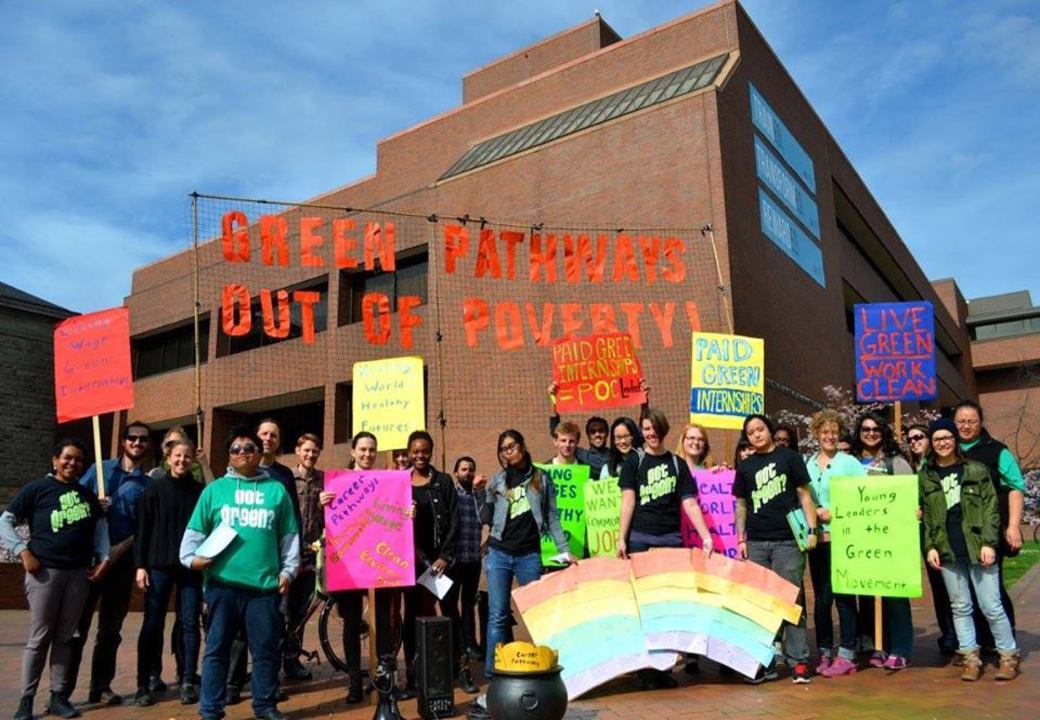 Most every millennial is familiar with the “work experience required (preferred)” barrier keeping them from gainful employment.

Seattle City Council’s Civil Rights, Utilities, Economic Development and Arts Committee took a huge step on Friday in addressing such impediments to jobs in Green employment fields by passing Got Green’s “Green Pathways” legislation through committee. Got Green, a South Seattle based environmental justice organization, has been lobbying for the legislation for the past several months.

The legislation, if passed by the full council next Monday at 2:00pm, after Mayor Ed Murray’s budget proposal, will eliminate the job experience hurdle many face in finding opportunities in Green fields through paid internships.

The legislation is expected to create pathways to employment, particularly, for those who cannot afford the cost of an unpaid internship or post-secondary education. The legislation would also implement a city-wide green jobs definition requiring jobs in the city to have a positive socioeconomic and environmental impact.

The legislation sprung from a 2013 survey that included 150 responses from across the city of Seattle. Got Green’s Youth Leader Organizer, Mo!, explained to the Emerald that “this legislation is our way of saying there’s a way to uplift the community and environment at the same time, and that meeting people’s needs and climate protection is a basic need and should be seen as such”.

South Seattle Residents who delivered public comment during the Council Committee meeting shared stories about the challenges faced breaking into professional positions while living in Seattle and attempting to meet their basic needs.

Selena, a Rainier Valley Corps fellow shared her experience, “as a young mother and first generation college student, I work hard to live and support a family and myself. Entry level position and paid internships, living wage opportunities for women and people of color affected disproportionately by systems are necessary.”

Belinda Chin, from the Environmental Professionals of Color, outlined disparities in green employment fields during her public comment: “People of Color comprise 40% of the U.S. population, but they occupy 12% of the job in the Green and Clean Energy sector’s workforce.”

The controversy surrounding unpaid internships is a part of an intensified national conversation around worker’s rights and racial equity. Unpaid internships have increasingly replaced traditional paid work in several industries.

A student performing taking on an unpaid internship is usually required to hold another job while working anywhere from 10-25 hours for the internship in order to support themselves. According to many critics, it favors upper middle-class, often white, students because these positions are attractive to potential interns who have alternative sources of income, as they are ostensibly working for free.

This discussion comes on the heels of Mayor Murray’s announcement of the halting of the North Seattle Police Precinct’s construction. The controversial project has been criticized due to cost concerns.

The committee, composed of Councilmembers Lisa Herbold,  Kshama Sawant, and Mike O’Brien, unanimously passed the legislation to set up a full council vote after final invited testimonies from Dionne Foster, Mayor Murray’s policy advisor; Mo!, from Got Green; Laurie Roccello Torres, a Got Green Youth Leader and Bailey Hinckley, from the Utilities Department.

The Councilmembers, who are regarded as the “G3” of the Seattle City Council, spoke themselves about the urgency of the legislation.

Sawant also denounced “Greenwashing”, an issue brought up by Mo!, the Youth Leader organizer from Got Green, earlier in the meeting when she explained how internships often replace labor intentionally.

The legislation goes to the Full City Council for a vote on Monday, September 26 at 2:00pm. The report that the legislation is based upon can be viewed here.

Photo courtesy of Got Green