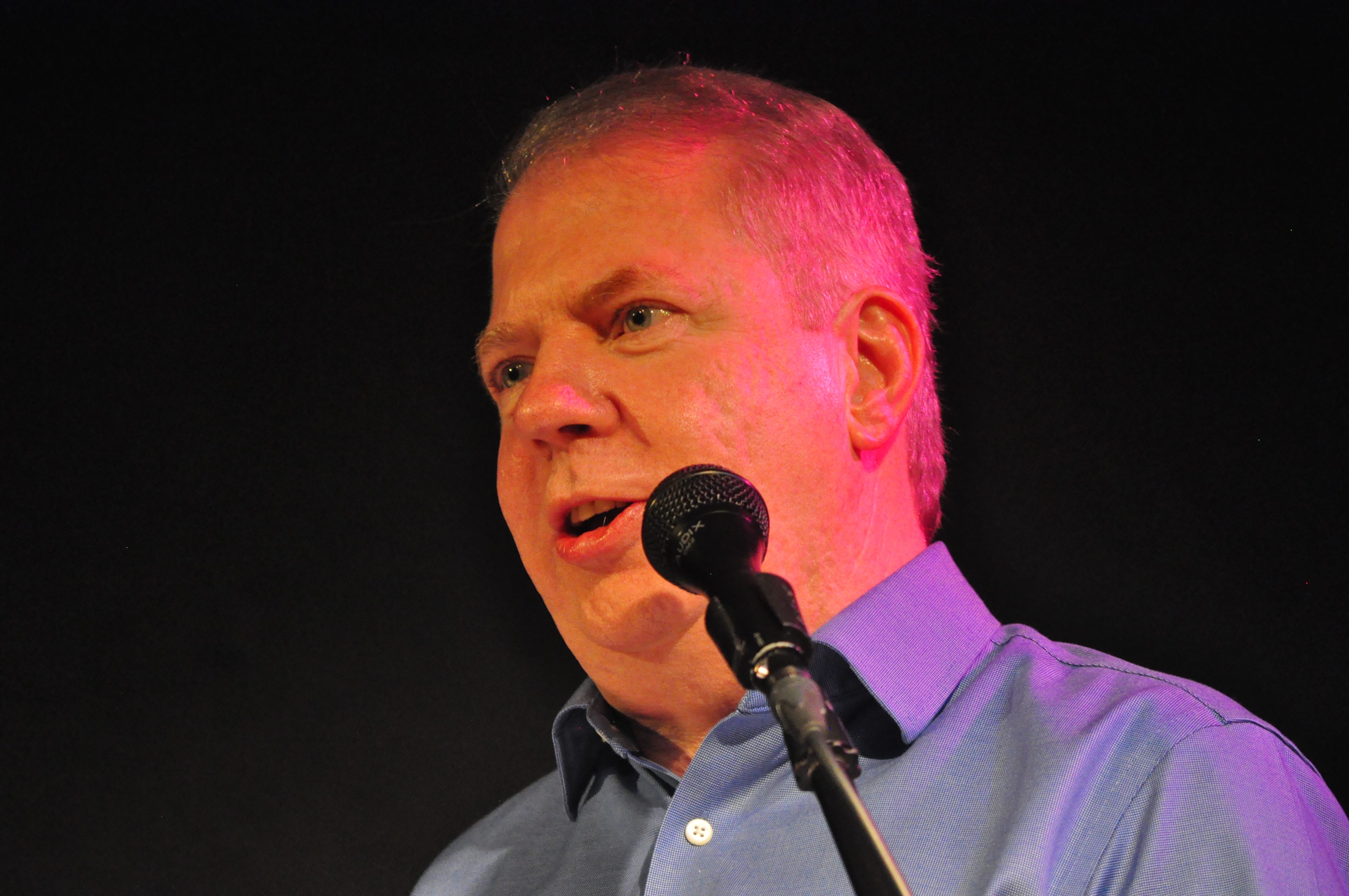 These were questions going through my mind as I walked into the crowded Bertha Knight Landes Room at City Hall on Monday for Seattle Mayor Ed Murray’s highly-anticipated annual budget speech. [FYI – Bertha Knight Landes was the first and only woman to serve as Seattle’s mayor, 1926]

The cause for anticipation was due to a number of factors. To my understanding, most of the people invited were there to show support for Murray, cast in the role of his standing ovation crew. Other city employees, possessing less enthusiasm, were also there – most likely as a requirement.

I saw several people from the South End community there, who wholeheartedly serve our area, and helped deliver much of the content delineated in the mayor’s proposed budget. Many of them expressed an obligation to hold Mayor Murray’s office accountable for fulfilling past and present promises to our community. I partly belong to the latter and, even more so, am representative of the people who were NOT invited into the council chambers.

As the scantly diverse crowd transitioned from the Landes Room, during a moment of silence just prior to Mayor Murray entering Council Chambers to give his address, Councilmember Kshama Sawant bravely took it upon herself to tactfully propose a motion.

The motion gave the council a chance to vote “ay” or “nay” to the entry of at least 25 community members who had been waiting downstairs since 11:30am (this was at 2pm, by the way). Current Council President (and District 2 representative) Bruce Harrell reluctantly allowed the motion to be presented.

Councilmembers Sawant and Mike O’Brien were the only “ays” against six “nays”, despite Sawant’s suggestion that the chambers’ rear doors be open to address the “maximum capacity” and “fire code” issues that Harrell adamantly used as justification for denying entry to the 25 citizens.

In my eyes, that set the context for this speech: it was meant to be delivered to an exclusive, strategically-invited and specific group of people. That doesn’t seem diabolical, does it? But on the flipside, I felt uncomfortable throughout the speech knowing that I had a seat and that others, likely much more deserving, did not. Let’s revisit that later…

As a life-long South End resident, I’ve literally watched the transformation of Beacon Hill, Columbia City, Martin Luther King Way, and many more areas south of the CD (“the Central District” whose REgentrification has been in motion since the late 90s).

I remember the South End before MLK had the Light Rail – and I remember when route 36 only stayed on Beacon Ave. But those days are over, with more changes to come. To that point, the mayor gave a surprising figure regarding transportation: a few years ago only 25% of homes in Seattle were in close proximity to buses that ran every 12 minutes – that number is now at now 72%.

And while many see the rapid development as “progress”, some of us whose voices are rarely recognized see it as invasive, too fast, and inequitable.

The mayor pointed at how increased construction can also increase city revenue, and how tech opportunities in Seattle continue to explode. But I’d like to hear more about the reality of our city’s affordability and its disproportionate effect on how people of color and especially residents of low socioeconomic levels are being displaced farther and farther south.

With that said, he mentioned a potential solution: The Cultural Anti-Displacement Act included in his proposed budget. This, in tandem with amplified equitable development, especially in the Rainier Valley, Yesler Terrace, and Chinatown/International District is the tool the City will use to combat the aforementioned displacement.

My pushback is that the damage has already been done; REgentrification is already in perpetual motion, and similar to other major West Coast cities, our People of Color are already being pushed out of Seattle in droves.

Mayor Murray frequently addressed what (White) Seattle folk continue to call a “challenge”: race, race relations, and racial equity. He even said “BLACK LIVES MATTER” – which visibly made many of the standing ovation crew flinch.

However, with sincerity he clearly stated “White America has work to do.” NO SHIT. Ironically, or perfectly, that led into his remarks on police reform and accountability. Pushing for “constitutional policing” and “proactive community policing” he also defended his police department by stating that they recently flourished in trainings on crisis intervention, de-escalation, and unbiased policing.

He really turned heads when he spoke of sustained civilian oversight of policing. Everything I heard started to taste sour when he seemingly used all these things as justification for the newly readjusted $149 million North end police station. Whatever the case, I support ZERO DETENTION and BLOCK THE BUNKER.

I was unsettled that there were very few young people who were in attendance at the meeting. I work at Rainier Beach High School and I relate from experience that the City and school district are often in emotional and financial disarray; they are often not on the same page, nor frequent collaborators.

It took people like RB alum (and my homegirl) Ahlam Ibraahim to convince Mayor Murray that The City of Seattle and Seattle Public School District should work together. Looking forward to this potential partnership there will be a few things to keep your eyes peeled for: the expansion of President Obama’s My Brother’s Keeper initiative (shout out to Aki Kurose Middle School – whoot whoot!), investment in summer programs with culturally specific foci (ayyyeee Washington Building Leaders of Change [WA-BLOC] Children’s Defense Fund’s Freedom Schools and Tyree Scott Freedom Schools!), and a Youth Opportunity Cabinet, which should prove to be interesting. He hinted at “targeted universalism” as a method needing further investment, especially considering its evidence and proven efficacy.

As the concluding topic of his speech, it wouldn’t be a Seattle Mayor discourse without addressing the baffling issue of homelessness. In a city with such affluence and resources, it is distressing how we are consistently at the top of the list when it comes to the number of victims of homelessness. Be watching for “Pathways Home”, a proposed element of the budget that is a part of our current State of Emergency for homelessness. As mayor Murray said, it is a not just a Seattle thing, but really a national tragedy and symptoms of economic and social diseases.

I’m not a proponent of government as the catalyst for social change. None of my role models from Ella Baker to Malcolm X believe it either. It is truly up to concerned and innovative citizens to hold our city officials accountable and urge them to revolutionary action.

There are many different ways to go about it. Some of us protest, some of us create art, some people even vote! No matter the manifestation, playing into the status quo that has proven to result tragically for some and not for others is not an option.

So, when I walked by that group of community members, parents, tax payers and justifiably angry Seattleites that waited but weren’t admitted to witness the mayor’s budget speech, I did not feel grateful to be of the chosen few.

As I sat (un)comfortably in my cushy chair and heard their chants through the walls, I felt an undeserved sense of privilege. When Councilmember Sawant proposed the motion to open the chamber doors, I voted “ay” from my seat.

If anyone who was not of the privileged elect to hear the mayor’s speech in person is reading this, I hope you receive my solidarity and hear my alliance. As a superior woman who overcame the handicap of traditional prejudice, Ida B. Wells, fiercely said “the way to right wrongs is to turn the light of truth upon them.”

Mayor Ed Murray’s budget speech was well written and well delivered, as it should be.  At the end, though, I had to say to myself “alright, now let’s see if any of it happens.” As engaged citizens and concerned community members we should be critical of our city officials and those who work for them.

My community has historically been underserved, over-commodified and frequently silenced. We are justifiably skeptical of political propositions. If we are demonized or excluded because we’d rather call them out than kiss their asses, then there will be valuable voices going unheard and unappreciated. Every element the mayor addressed (which Seattle grassroots organizers have already been actively working to dismantle and/or elevate) should be acted upon with urgency as a state of emergency.

Too many lives are at stake for us to be apathetic or neutral. Too many young peoples’ futures are being dictated by empty lip service. If we are truly activists, advocates of progress and agents of change, there is no time to waste. Which side are you on?

One thought on “Perspective: What Wasn’t in the Mayor’s Budget Proposal”