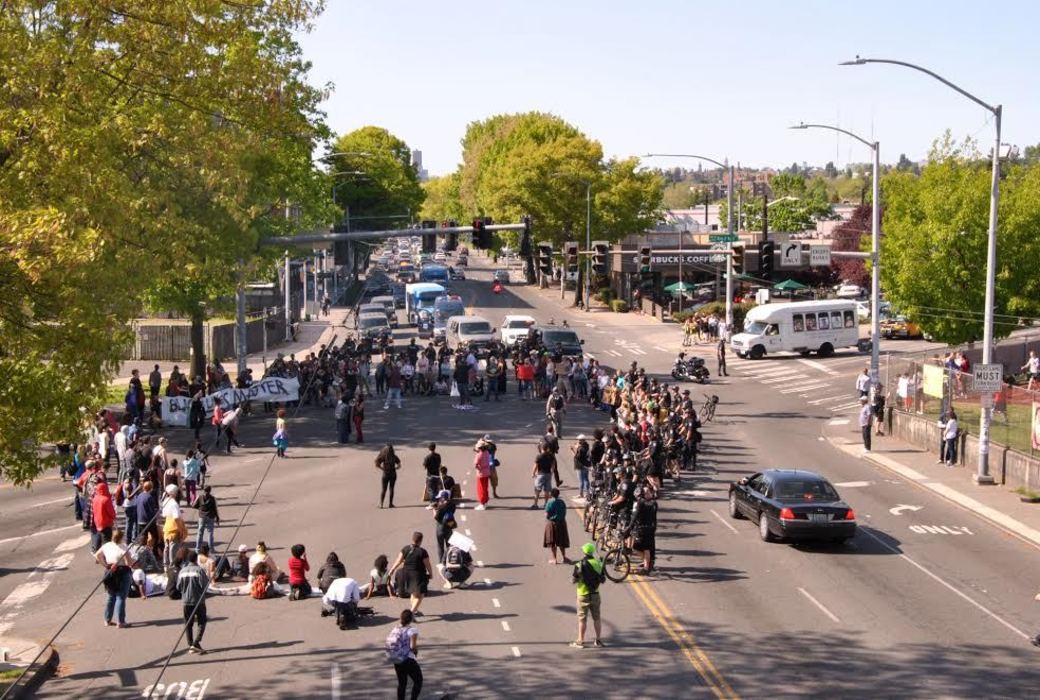 Nationwide, Black Lives Matter has successfully increased public awareness of police violence against people of color.  In Seattle, BLM and other racial justice activists just convinced our mayor and city council to suspend the construction of a new 146 million dollar North Precinct Police “bunker” that activists said would lead to further police militarization and excessive use of force.

Even before the City Council police precinct showdown, SPD had escalated its response to BLM and related groups.  On July 9, 55 officers were deployed to monitor activists meeting in a small branch of The Seattle Public Library.

The reason?  Terrorism, of course.

SPD’s “Incident Action Plan” for that deployment was “to prevent, mitigate or respond to criminal terrorist acts.”

The Action Plan doesn’t specify what SPD was expecting at the Beacon Hill Branch, but it does refer to the over 1000 racial justice activists who marched in downtown Seattle two days earlier:

“On 07/07/2016, there was a large demonstration in downtown Seattle in light of two (2) controversial Officer involved shootings which occurred in other states. More than 1,000 people attended the demonstration, which began at Westlake Park and included a march throughout downtown. Simultaneously, at a similar event in Dallas, Texas, a gunman conducted a military style ambush, killing five Officers and injuring seven others. 2 Civilians were also shot.”

SPD’s reasoning seems to be that a peaceful Seattle march was similar in some way to the killing of five officers in Dallas, so Seattle activists need to be put under surveillance.

SPD didn’t want anyone to know about this.   Public Information Officers only summarily responded to my routine requests for information after the deployment.  And it appears that the Incident Action Plan may have only been released to me in error two months later, because it says, “Public disclosure of this record would have a substantial likelihood of threatening public safety.”

So, if we the people discover that SPD is spying on peaceful local activists, that somehow puts our safety at risk?  I say that not knowing about such covert intelligence-gathering poses a threat to our safety.

Most worrying of all, the Plan says, “Officers must be mindful that plainclothes and undercover Officers may be working within or near the crowd.”

Of course, the history of activism in this country is riddled with police, FBI, and Homeland Security spying on activists of all stripes.  So, it should come as no surprise that SPD is monitoring BLM now.

But a meeting in a library on a Saturday afternoon?  Perhaps anticipating that the appropriateness of this level of surveillance would be called into question, SPD says, “There is speculation that the group may decide to march after the meeting.”

I wonder how much that “speculation” cost Seattle taxpayers.  SPD personnel assigned to the surveillance operation included a captain and 4 lieutenants who led the operation, bike cops from 3 precincts, 3 SWAT squads, prisoner-processing personnel, a transportation component, traffic cops and an Intel officer.  In addition, the plan called for the new ultra-tech Real Time Crime Center to be activated.

SPD apparently considered the likelihood of violence high enough to provide officers with contact information for 4 ambulance services and 8 nearby hospitals that could receive the wounded. In fact, it turns out there were no wounded.  There was no violence.  And there was no march!

Hey SPD, maybe this whole futile venture will give you a little insight into why we the people don’t want to fund any more toys and buildings for police.  At best, it was a pathetic waste of public resources.  Far worse could be its long term chilling effect on our right to peaceably assemble, speak, and protest in our city.

Laurel Holliday is a Seattle based author and reporter who writes about racial and social justice.