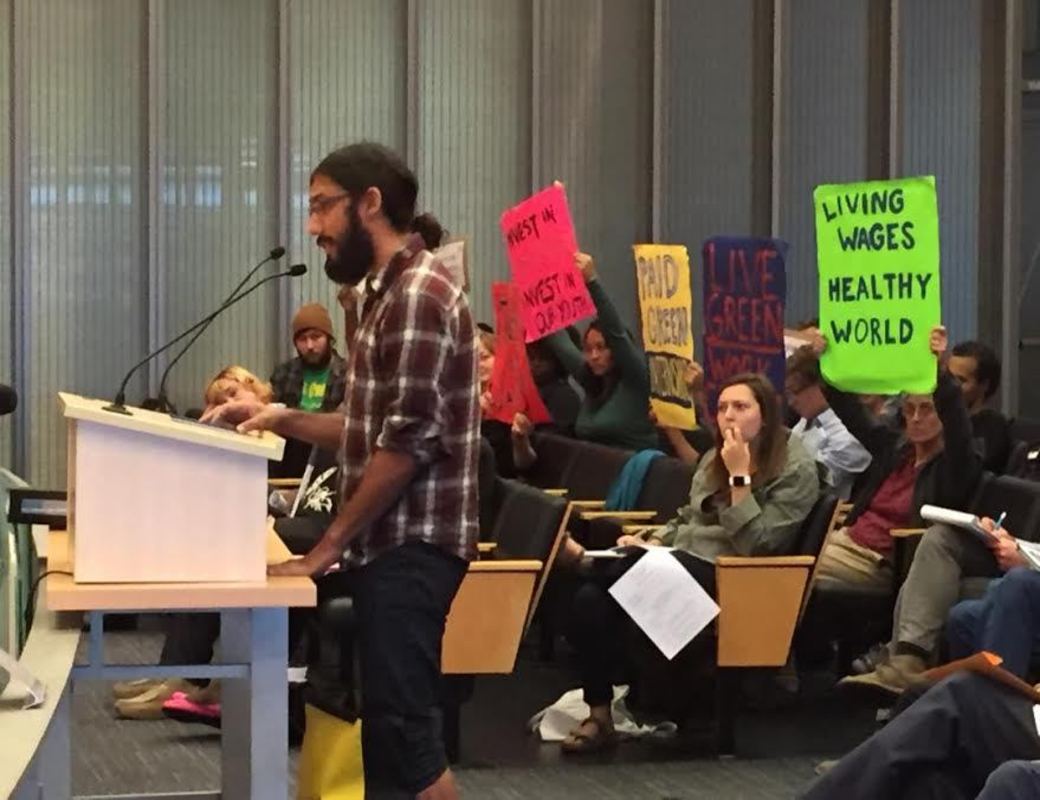 Seattle City Council unanimously adopted Got Green’s Green Pathways Resolution on Monday to support the development of green careers for young people of color, both in city government and Seattle’s private sector.

The legislation focuses on combating socioeconomic barriers for young people in communities of color to access paths to quality internships, apprenticeships and jobs.

It calls for employers to have a racial equity lens in their outreach to potential applicants, as well as pay a living wage. It seeks to ensure jobs are good for the environment and the community they exist in.

Got Green, the South Seattle based environmental justice organization, championed the resolution for the last several months.  Members of the group also directly helped shape the proposal by sharing their experiences of struggling to find employment and support themselves despite having college degrees.

Mo! Avery, the Program Organizer for Got Green’s Young Leaders program spoke to city council about the importance of this legislation prior to the vote:

“Even while struggling to make it, young people have environmental values and want to make a difference. Our city has an obligation to make sure this potential does not go to waste.”

The resolution, co-sponsored by Councilmembers Lisa Herbold and Mike O’Brien, defines a “green job” as one that “preserves or enhances environmental health as well as the economic and social well-being of people and communities, centers on communities most negatively impacted by climate change, and pays a living wage while providing career pathways.”

Marion Romero, a Got Green Young Leader Fellow, told the Emerald that the passage of the resolution signifies a “breakdown [of] the stereotype that the younger you are the less you deserve. Many people come with different skill-sets.”

As for next steps, the resolution will create an Interdepartmental Team (IDT). IDT would develop an inventory of internships, apprenticeships, and positions requiring one year or less of relevant work experience across the City of Seattle workforce, and also identify positions that fit the definition of green jobs.

The end game of the resolution is to create more than 100 Green Jobs that would fight the issue of nowhere jobs – those offering no opportunity for advancement  or skill building – that Marion and other Got Green Young Leaders identified as a problem for the community in a survey  of South End community members taken earlier in the year.

At the September 23rd  Civil Rights, Utilities, Economic Development and Arts Committee meeting where the legislation was first introduced, Selena Velasco gave a strong endorsement of the legislation during the public comment period:

“As a young mother of color and first generation college student I struggled to balance a part    time job, school and an unpaid internship while supporting my child and family, living pay check to pay check. So I know by creating entry level positions and internship opportunities that uphold the proposed green pathways tenets there will be more accessibility to equitable paid,   living wage, entry level positions and internships for women, mothers of color and people of  color like me who are most impacted by the disproportionate affects of climate change.”

The green jobs resulting out of Got Green’s work are intended to lead people to careers in waste reduction, alternative transportation, green energy, urban farming, and clean technology, among other fields, fields that have previously been criticized for their lack of diversity in their hiring practices.

At Monday’s full council meeting, Herbold linked racial and environmental injustices to need for green jobs as, “13 out of 14 of the heaviest industrial polluters in Seattle are within half a mile of the places where communities of color live. The jobs intended to fix that environmental degradation are most important to our world, but often pay the least.”

Councilmember Bruce Harrell, who represents the city’s South District,  also praised the legislation, “With this bill, we are continuing to prioritize and challenge our employers and City to ensure we are building a pathway for our young adults of color to gain access to living wage green jobs career – that’s what is at this resolution’s core.”