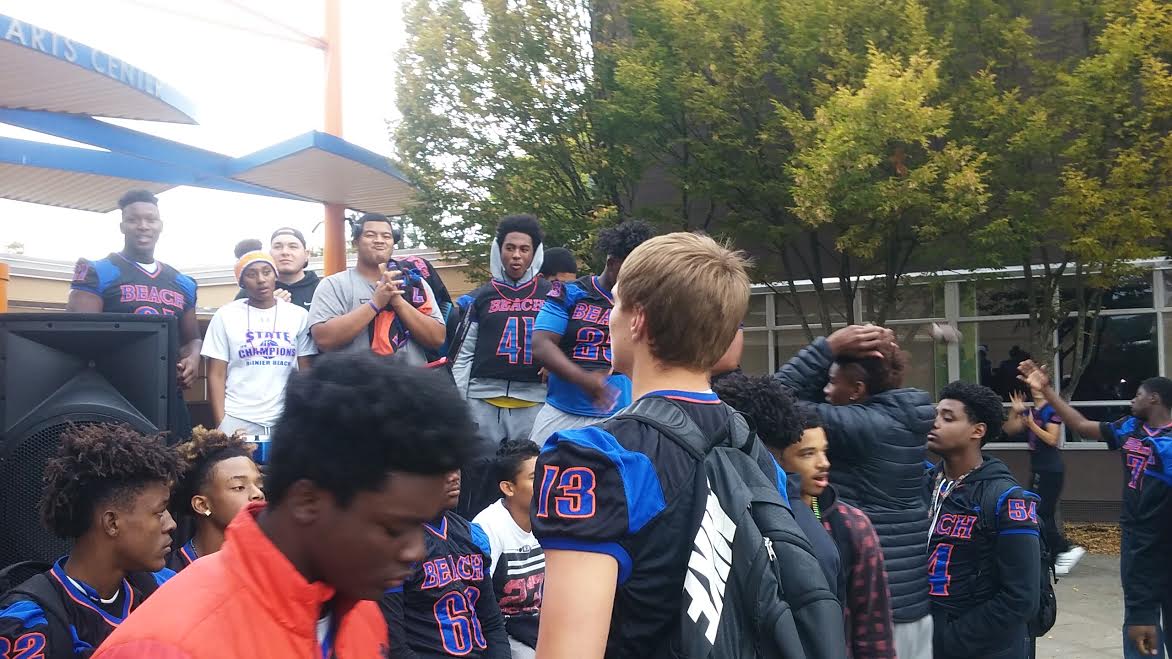 High school homecomings usually involve a coming back as opposed to a coming out, but the latter is just what the Rainier Beach community did at Rainier Beach’s Homecoming game on Friday evening in support of the Vikings undefeated football team.

Hours prior to their contest against Sammamish High School players and students mingled with community members at a tailgate party hosted by the Rainier Beach Merchant’s Association in the school’s parking lot.

As hip-hop music and the smell of grilled burgers swept through the air, Rainier Beach’s older generations took the time to praise the hard work of newer ones.

“We like to participate in neighborhood stuff that brings people together, particularly supporting the kids at Rainier Beach high school. Today is really about these youth,” said Donovan O’Brien, a resident of the neighborhood for more than 25 years and a member of the Rainier Beach Community Club.

O’Brien, clad in an orange jacket to coordinate with the blue one his wife Carole wore to match Rainier Beach High’s school colors, said he was happy with the continued academic improvement the high school has made year after year. Last spring the school’s graduation rate of 79 percent outpaced the district average of 74 percent.

“I really just want to support the community,” said Jane Fairchild, who’s lived in South Seattle since 2000, and chatted up some of the other community members, as well as the players in attendances wishing them well on the contest.

Students in attendance appreciated the presence of residents like O’Brien and Fairchild, as many of the high-schoolers expressed feeling overlooked at times by adults who rarely interact with them due to negative preconceptions.

“I think its super dope to have the community come out and support because you hear beach and people probably think bad things, but when the community comes out and really sees what we’re doing it’s really cool. We’re not just another statistic. We’re actually doing something here,” said Beria Heyman, a junior at Rainier Beach High, as she tailgated with friends.

That support also came in the form of a chocolate football of all things. Maia Segura of the RBMA presented the chocolaty goodness, donated by local choclatier Lesly Chacon of Rainier Beach’s Wow Chocolates, to Rainier Beach football team captain Corey Simpson, with the rest of the team gathered around them trading jokes about who would be the first to sample it in a brief ceremony.

The gift was but the latest gesture of community good will received by a football squad that has long been overshadowed by the school’s high profile basketball program. However, the teams perfect record this season has shifted the spotlight somewhat.

“There’s been a ton more community engagement since the kids have started winning,” says Ramon Villalovos, an assistant coach for the team, who also served as the disc jockey at the tailgate party.

Villalovas shared that the number of kids participating in football has seen steady growth ever from 30 kids and the beginning of the season to nearly twice that since their Varsity squad reeled off a string of victories in dominating fashion this season, outscoring their opponents 248 to 52.

But as much support as they’ve received, Villalovas says more is always desired.

“Our kids just need continued support. They work really hard, putting their hearts and soul into this season, and some don’t have much except this community around them. Important we pick up the slack. The more the community comes out and helps, the more it shines a positive light on the community,” asserts Villalovas, who began coaching the Junior Varsity’s offensive line in August.

He knows the team’s winning ways will go a long way in attracting additional community members to the team, and says their ultimate goal is winning the state championship.

Such a goal may have seemed like a pipe dream at the end of last year when the team finished 5 and 5, near the middle of the pack of Seattle’s Metro League, but if Friday’s thumping of Sammamish High School (41 to 7) is any indication, the team, and school, will have to make room for a lot more of the community to hitch a ride on their bandwagon.

Note: Maia Segura is a board member of the South Seattle Emerald