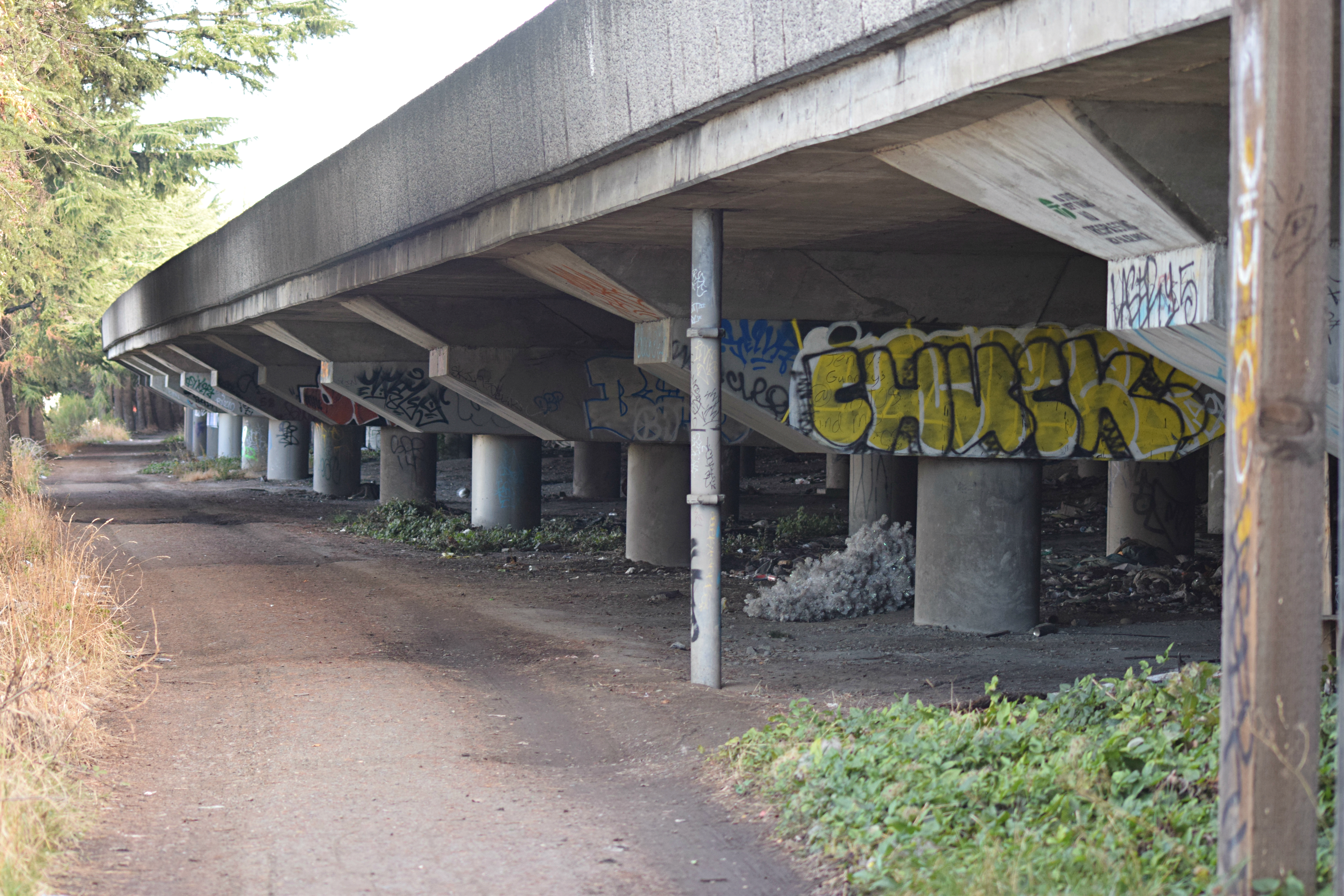 At 8:30am today a press conference was held by the City in front of “The Jungle”, one of Seattle’s biggest homeless encampments, before clearing it and destroying it. The Jungle, also known as the East Duwamish Greenbelt Encampment (EDGE), is one of the most well-known encampments in the City of Seattle.  It is an informal community under the I-5’s greenbelt going through SODO.

Housing justice advocates saw its removal as a symbol of the City’s tendency to view certain communities as problems, rather than communities in need of services. Upon arrival to the site yesterday, the police had already cleared out most of the residents; those who remained were grabbing their belongings among debris left by the sweep. Advocates from the Tent City Collective, the Tenants Union of Washington, the Stop the Sweeps Campaign, and members of Seattle Solidarity Network and Standing Against Foreclosure and Eviction protested behind the press conference.

The Mayor’s spokesperson on the scene, Scott Lindsay, was joined by people from the Union Gospel Mission to speak to the public and justify the sweep as a matter of public safety for the residents.

The SPD moved protestors behind a barrier as their cars formed a cordon that secured the area for them to conveniently remove residents of the jungle. The sweep moved 400 residents of the Jungle from the encampment to either “the triangle” – the City sanctioned encampment at Airport Way S and Royal Brougham Dr., the Union Gospel Mission, or other unknown locations.

The population of the Jungle included people from various refugee and immigrant communities, single individuals, and many who suffer from mental health and substance abuse issues and did not have access to care. According to reports from advocates, the city sent outreach personnel the night before the 8:30am sweep to offer residents a chance to move elsewhere ahead of the sweep.

Scott Lindsay, the Public Safety Adviser to the Mayor stated The Jungle was unsafe and that “at Airport Way and Royal Brougham…there’s access to Porta Potties, food supplies and a mobile shower truck.” However, many advocates on the scene questioned why services weren’t provided for the already existing encampment. Especially since the concern was raised that the already large encampment at Airport Way and Royal Brougham was at capacity and moving so many individuals there would be dangerous with winter coming. The Union Gospel Mission also opened their doors to the residents but it was unclear how many residents had, or could, reside there and how long they could stay.

The Emerald followed up with an observer on the scene from the Tenants Union of Washington State, Hana Alicic, who said that displacement isn’t the answer to homelessness in Seattle:

I’ve worked in housing issues for a very long time, and I know that substance abuse, drug trafficking, human trafficking happen – but the reality is that we’re just dispersing them. They are going into more and more isolated pockets.  Instead of providing services, people are going into more perilous situations.

The alternative to the sweeps Alicic identified – and many housing advocates at the sweep supported -was providing services to these informal communities. In their opinion, despite reports from city personnel that characterized the site as an unsafe location, there could have been a lot more intentional outreach and “a lot could have been done to make [The Jungle] a safer place to live”.

In addition to housing justice advocates, other residents of neighboring encampments came to lend their support, in large part because they feared that their home was next or they had experienced a sweep themselves.

Brian, a supporter from a neighboring encampment on S. Spokane St, was taking care of a resident who was incoherent at the scene when he recalled his story: “Ten times a year I lost my camp and I’ve been forced to move. I know people who have been doing this for 15 to 20 years.” When asked about the camp at Spokane St., he described it as “buttoning down” in case they were targeted next to be removed. According to Brian, four families live at the S. Spokane St. encampment.

In addition to living in fear, a number of families also face the danger of being exposed to drug or human trafficking, violent crime or inhospitable conditions if they are forced from their chosen living locations. Residents I encountered later on in the day were concerned because they indicated they weren’t sure of where to go and no clear solutions had been offered to them.

In an August 2016 City of Seattle August assessment of outreach led by the Union Gospel Mission to the EDGE, it is clear that more outreach and permanent solutions are needed. Since May 23rd, out of 357 people engaged at the encampment, only 70 were moved into housing or services or received relocation assistance. The report goes on to break down those numbers and reveals that only 21 of those 70 entered into a recovery program, including housing, despite “the outreach team [estimating] that approximately 90 percent of the people living in the EDGE are struggling with substance abuse disorders.”

More importantly, the sweep today is even more chilling given that the City and the Union Gospel Mission admittedly did not attempt to engage those who may have been involved in or surrounded by drug or human trafficking activity with shelter services or recovery programs. Also, the study cites that of the near 400 people engaged at the site, many moved on to other encampments and/or moved back to the EDGE after being engaged by outreach teams.

The study was very clear that a long-term housing pathway was needed for homeless people in the EDGE and the sweep today was both devastating and counterproductive to that goal. In a final remark to the Emerald, Hana Alicic of the Tenants Union echoed the report’s findings: Block the Bunker and the Housing Justice Movement have shifted the narrative of what safety means… even council members agree that we need to start thinking differently about safety; not from a punitive lens but through a social services lens.