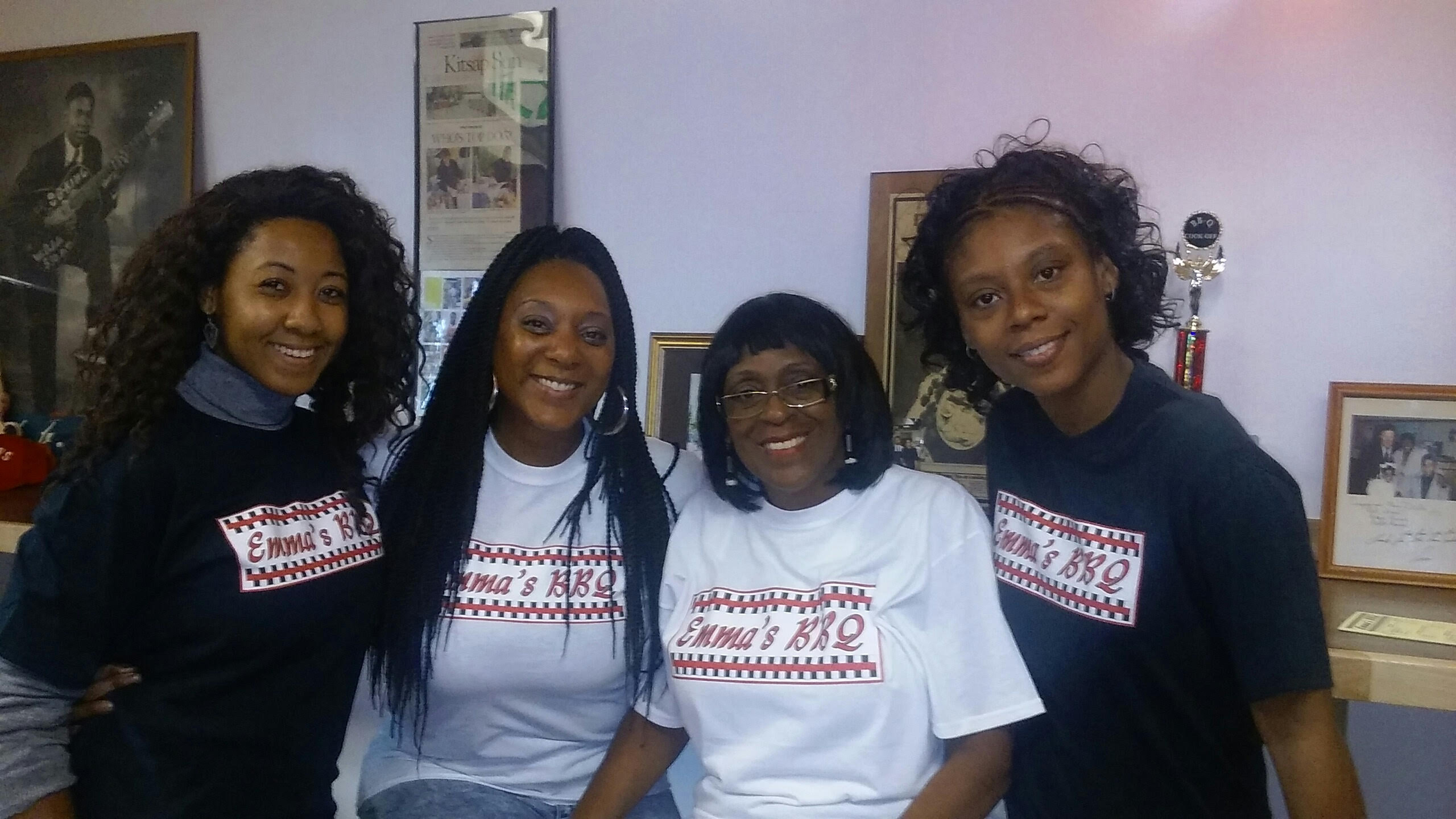 From offerings of supple beef brisket to taste-bud charming pulled pork sandwiches; the above ingredients, more than any other, are essential to every entrée found at Emma’s BBQ, according to Tess Thomas, the owner of Hillman’s City’s newest restaurant.

On this Saturday, Thomas has a beaming grin awaiting any patron walking through Emma’s doors. They’re catching her on an extremely rare respite from seasoning beef and dousing collard greens in her family’s special “hot stuff” recipe in the restaurant’s kitchen.

“So many other restaurants seem so sterile. It’s important to me to have warmth here because when you love what you do, you put that love into doing it. I always say that it’s just as easy to smile and be happy as it is to have that frown on your face,” says the 70 something Tess.

Seated at one of Emma’s corner tables while photos of loved ones hang over head, she’s taking a moment to hold court with her three adult granddaughters Miceala, Rasheena, and Michaelin Thomas, all part of the family so critical to making Tess’s dream of owning her own restaurant a reality.

“My grandmother’s waited for so long to have the opportunity to have a restaurant, so we were most definitely going to be here to help her when she finally got to a point in her career she could. She wanted to go back to all of our roots.” says Miceala, Tess’s eldest granddaughter.

Miceala speaks about her Grandmother Tess’s desire to open a BBQ place in the Hillman City neighborhood their family has resided for more than three decades.

Running restaurants is embedded in the Thomas family DNA. Between aunts, cousins, uncles, there have been eight restaurants that have passed through the family, including Heckle and Jeckle’s, Bugalow’s BBQ, Soul Brothers BBQ, and the first Emma’s BBQ, established by Tess’s mother in Bremerton, WA, where Tess grew up after her family moved from Arkansas.

As is the Thomas way, Tess found herself supporting other family members at their establishments, instead of pursuing the opening of her own. Besides assisting family, there was another passion keeping Tess from putting her energy into professional cooking: her love of children.

Tess has run a foster home in her Hillman City residence on 42nd Avenue and Spencer Street for more than 30 years, opening her doors to hundreds of children as they transition into permanent placement.

“Honestly, we were raised with people who weren’t necessarily our family, but shown that it’s a beautiful thing […] You can treat people who aren’t your family like your cousins, sisters, and brothers, just off of the strength of a person needing something,” says Miceala, who spent many days growing up at her grandmother’s house forging lifelong bonds with the kids Tess fostered.

“That really taught me so much about love and the commitment,” adds Michaelin, Tess’s youngest granddaughter.

Tess’s love for cooking never diminished, as it especially came in handy during the holidays when she opened up her doors to anyone within sniffing distance of her stove.

“She would invite everyone into her home, especially around Christmas and Thanksgiving. Everybody was invited and everybody came over; at least 75 to 80 people. We had gumbo, smoked meat, everything,” shares Rasheena.

The lessons imparted to her granddaughters are simply those Tess picked up from her own mother Emma, who the restaurant is named after.

Miniature placards of Emma, are at nearly every table in the restaurant. They tell the story of the Thomas family matriarch who had little in the way of formal education, but still opened a successful restaurant in Washington at a time when the civil rights movement was barely bubbling.

It was from time spent in the kitchen there where Tess also inherited her mother’s sixth sense for crafting a meal.

“My mother didn’t read or write, but she could smell or taste a dish, as it was being cooked and know what it needed. She would say ‘it has to have a little bit of that to make it good’,” shares Tess.

Saving money throughout the years, Tess finally decided it was time to revive Emma’s BBQ. But this time it would be located just a few blocks from her home, on Rainier Avenue, in her neighborhood of Hillman City.

Tess says though her family didn’t know how rapidly her plans of opening the restaurant were proceeding, her extended family and friends immediately came through for her, including the owner of the building who gave her extremely reasonable terms on the storefront that was formerly a medical marijuana dispensary.

“The support I’ve received from them has been tremendous,” she shares.

On October 7, the second incarnation of Emma’s began, as the building opened its doors to the neighborhood Michaela and Rasheena had called home all of their lives (Michaelin lived part time with her mother back east growing up) with Tess’ granddaughters, son, nephews, and cousins contributing somehow, either behind the counter, or in the kitchen. Tess herself puts in about 12 to 15 hours a day in the restaurant, while her husband still runs the couple’s foster home.

Though open for barely a week, not many with working taste buds have second guessed visiting to sample the Southern-style BBQ and cuisine served up by Tess.

“The meat is so good, whatever the seasoning is. It’s not overbearing at all, and it actually taste like BBQ. I’ll be back there’s more on the menu. I have to sample all of it,” said Teresa Rhoades, who tried out Emma’s after her niece suggested it.

Word of mouth and messages on local Facebook groups has echoed Rhoade’s praise.

On Saturday though there wasn’t much in the way of noise coming from the majority of  patrons as they paid the ultimate show of respect befitting a great meal, near dead silence as their teeth tore through brisket and pork ribs.

“Great quality, and great quantity at a good price,” is what Emma’s wants to be known for according to Miceala.  Menu items currently range from $10 to $24 dollars depending on the serving sizes.

The Thomas’s also want Emma’s to be known for the example it’s setting that local South Seattle residents can pool resources together in order to enhance their community.

“There’s value in community. There’s value in building your own community. We see what’s happening every day.  They’re gentrifying us. So this shows that we’re still here and it’s possible for people to be still able to put down some type of roots here,” shares Miceala.

The eldest granddaughter also shares the family hopes to one day franchise Emma’s and would love to pass it along to others in the family.

“It’s important to me being an African American woman and in business to be able to have something in the community that community folk can look up to, to know that this is something we can do,” says Tess.

Ultimately, though, it’s all about the food.

“Bringing this style of cooking to the neighborhood is wonderful,” says Tess, who owns the only BBQ place in either Hillman City or Columbia City, after Jone’s BBQ moved out of the area last year.

She shared her joy by concluding our interview with a jingle she’s been working on to advertise her restaurant:

“Emma’s, Emma’s the place for you, we’ve got the finest in Bar-B-Que, Come on in now, It’s lip-smacking good, come on in now, because we’re gonna treat you good…”

And as she laughed, yet another patron filing through her door was greeted by a smile.