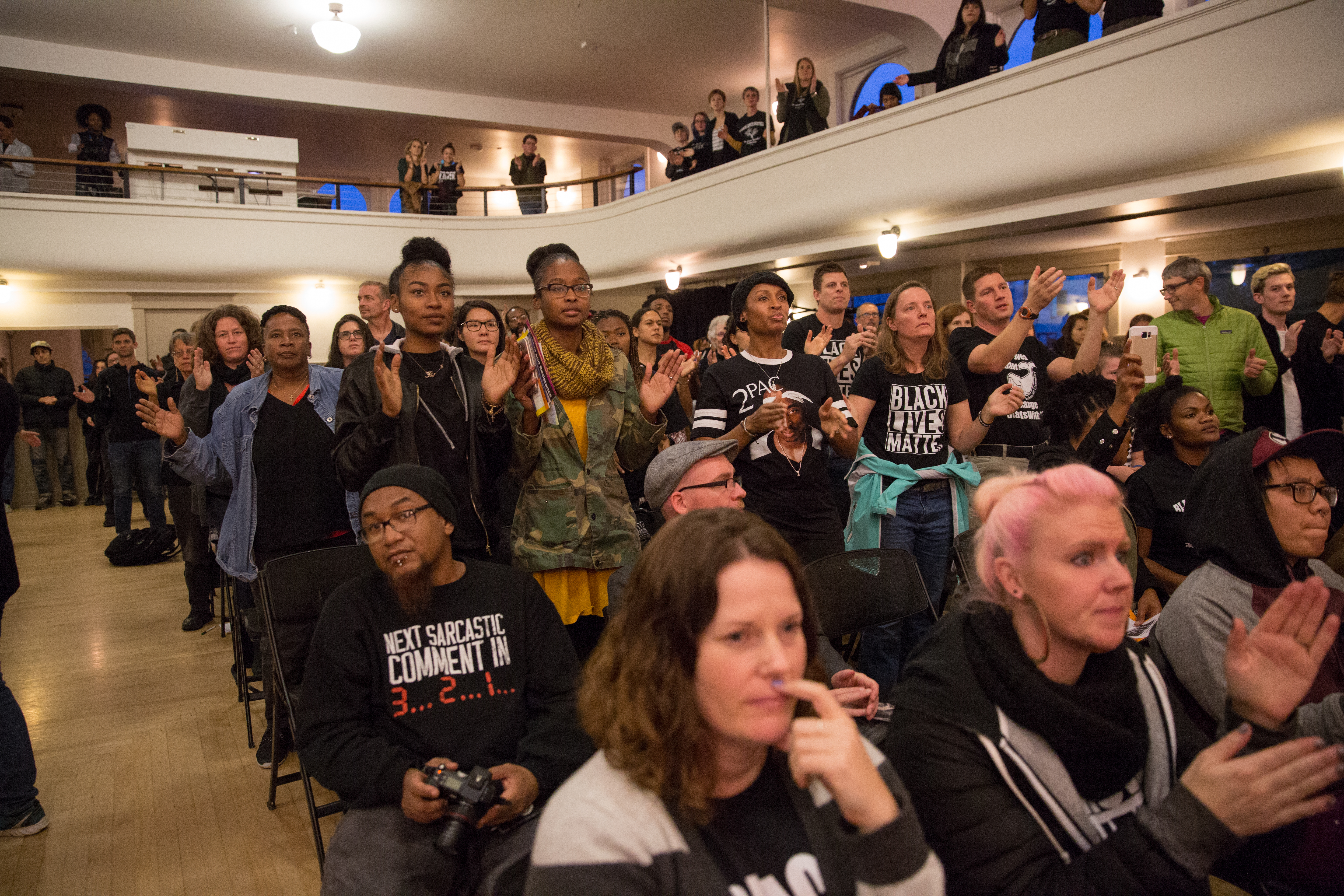 Wednesday night, Washington Hall was bursting with sound: a constant buzz of chatter, throb of laughter, and beat of music. A rally was happening, following the full work day of educators across Seattle who chose to redirect curriculum, hold discussions, and wear t-shirts for Black Lives Matter.

“The revolution will come when you and me choose the power of we,” said poet and Bellevue equity specialist John Eklof. “It’s ‘all lives matter’ until we start talking inclusion.”

Local educators announced their plans for a district-wide Black Lives Matter demonstration last week, but they still had surprises up their sleeves.

After a few performances from local artists, Seahawk defensive end, Michael Bennett, walked onto the stage. You could feel the electricity transfer from person to person in the room. Teens and dancers began whispering to each other and gasping, no way; oh my god.

In one epic instance, a young boy and girl asked to shake his hand.

“We have to be a community, making sure we’re a part of what’s going on,” Bennett said in an interview backstage. “These conversations are what’s important.”

He noted a lot of people wouldn’t show up for this conversation around Black student and student of color support, but said showing up is important. Bennett felt he and others should make sure to help the dialogue and the movement, not hurt it.

The Seahawk spent a large part of his interview expressing how much he liked the community he saw that evening, calling Seattle “the right city” to be the first for district-wide organization.

“It’s unique because it’s organic,” Bennett said. “It’s not for cameras. It’s not for TV. It’s just real, live people that are really asking questions. And I have to go up there and face the questions they ask and have to be able to answer them.”

“We didn’t feel like you guys [educators] actually cared about us because we have parents sending hate emails to our teachers, and it’s just ugly,” said Aman Weldertiel, a Garfield High student, when asked his perspective on how Black students are treated at his school. “Some students don’t practice what they preach.”

Khabirah Wellington from a different Seattle school felt that students of color don’t get the same education as their peers, as if they’re “not valuable enough” just because they don’t fit into a role.

“These kinds of things set students up for different futures,” she said. Wellington also noted that her Honors history class only has one other Black girl in it.

Jaheem Lee from Hamilton noted the same thing, having never seen a Black or even mixed-race kid in all of his years at Hamilton besides himself.

“I see a lot smarter students than me with a lot more potential,” Lee said, “that aren’t getting what they need just because they’re darker than me.”

Young Azura Tyabji, who went to Nova alternative High School, and has a long background in poetry was there to perform that night.

“I don’t know what would kill me first: a building collapse,” she posited, “or the police mistaking my mother for a weapon.”