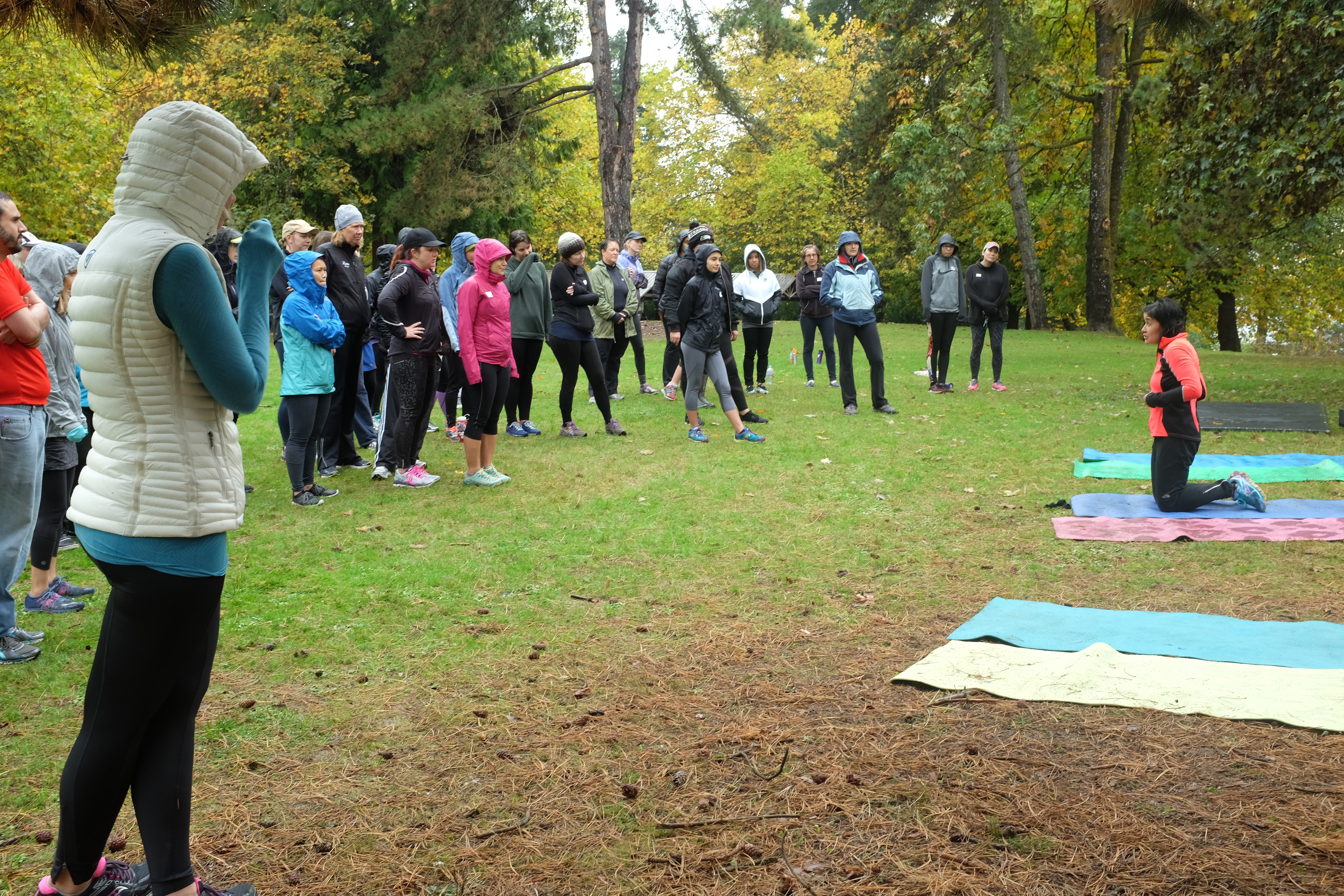 by An Vuong Nguyen

With their rain jackets and running shoes on, Seven Star Women’s Kung Fu trainers and 42 participants engaged in a self-defense class in Seward Park, where a recent assault worried some attendees.

The one-and-a-half hour class on Sunday was free, and participants learned to fight potential attackers using only their bodies. The class was targeted at runners, joggers, walkers, and those who spend time in parks or recreational areas.

In the beginning of October, a woman reported that she was sexually assaulted while jogging through Seward Park, the same location where the class later took place. Though the victim escaped and called police, the attacker was never found, according to the SPD Blotter.

Leslie Dresdner, a participant in the class, said that there had been a handful of previous attacks in the neighborhood, including the recreation areas. Some neighborhood reports show that there were three assaults in the past two months around the Seward Park area.

“I spend a lot of time in Seward Park, but the recent attack on the outer loop concerned me,” said Dresdner.

Other participants also said that they came to the class after hearing about the assaults, and wanted to be more prepared.

“I think it’s nice to come together over something that can make us feel strong and positive, instead of disappointed and fed up with the situation,” Sharon Ricci said after attending the class.

Audrey Taber, a University of Washington sophomore, took the class with her mother. Taber says she’s read several reports of assaults on campus lately, some occurred on the Burke-Gilman trail.

Gina Mares Kurtz, the class’ instructor, said that this was the first self-defense class offered specifically to runners and joggers by Seven Star Women’s Kung Fu. Kurtz was disappointed to have heard from friends and clients that they were fearful of running in the park, and the event was held as a way to help.

“I wanted to use my skills to help neighbors and friends feel confident to recreate in our beloved park,” Kurtz said.

Nearly 50 women showed up for the class, and because of the positive response, Kurtz said that she might offer one more class later this winter.

“It’s realistic and appropriate for us to practice self-defense in the park and in the rain because that is our experience for over half of the year,” Kurtz said as she carefully monitored the weather report the day before the class.

Kurtz said that in reality, physical attacks could occur to anyone, at any time of the day, under any weather, and at any time of the year. At the same time, runners and joggers aren’t typically prepared with objects to fight back in a dangerous situation. So what are the options?

The list went on as women shouted out what they could realistically use to defend themselves in a park. The idea was to use whatever body parts and items that are not being constrained, and to realize that attackers have their vulnerabilities too.

The instructors of Seven Star Women’s Kung Fu provided everyone with a safe place to practice, where each person took turns pushing, kicking, and punching dummy pads. For each exercise, the instructors encouraged participants to shout for help.

“Your voice is your most powerful weapon,” Kurtz said.

By shouting, victims can scare off the attacker and attract attention. Both verbal and physical resistance can reduce the likelihood of rape in an assault, according to a study by Jocelyn A. Hollander in 2014. Furthermore, the study has shown that women who have taken self-defense training feel more confident, are less likely to experience sexual assault, and are more likely to recognize and report an assault.

Taber said that the class helped her explore options and provided a chance to practice. She said that even though she would still not feel comfortable running alone at night, she at least knew how to respond in a bad situation.

One of the participants, Sharon Chism, said that it was also a powerful way to prove that women are strong and capable of fighting back.

“You can protect yourself,” Chism said. “You are your protection, you are your best bet against anything that could come at you.”

Sure, physical training is not the ultimate solution to eliminating assaults, but it is a wonderful tool for women to be prepared and feel confident.

“It was empowering to be with such a large group of women from the community learning these skills together,” Dresdner said. “It felt like we were taking our park back.”