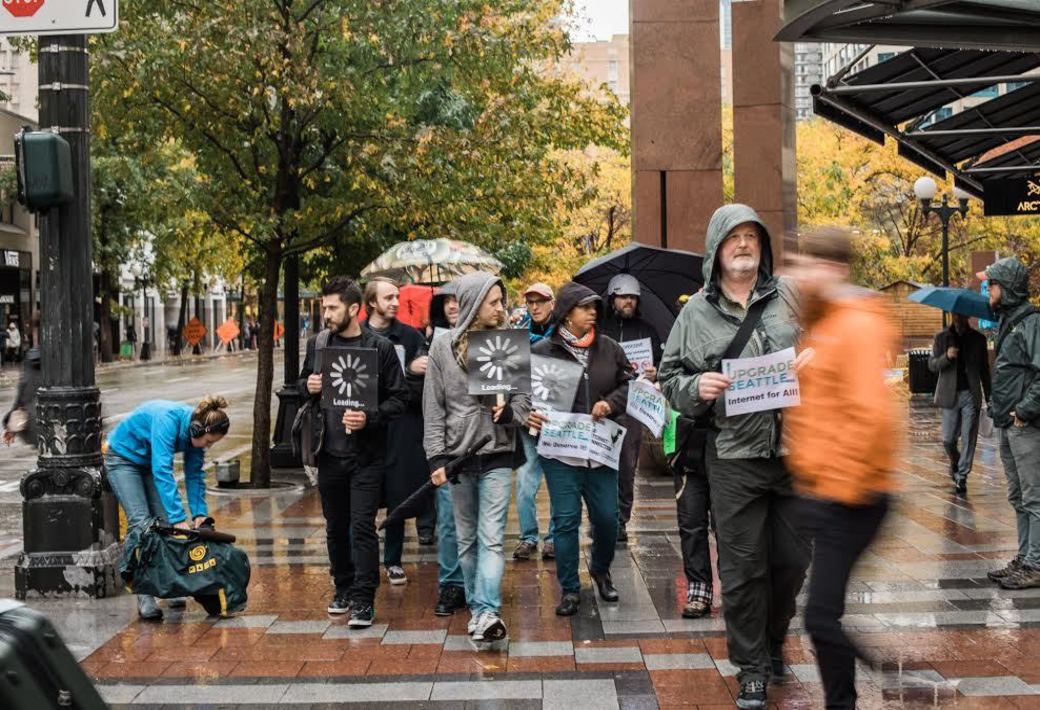 Less than a block into our Slow Internet Walk from Comcast’s office to City Hall, a construction worker approached in solidarity.

“Comcast is terrible!” he said. The TV cameras turned from us to him. A KOMO reporter asked him about his experience with Comcast.

“Oh, they’re the worst. The problem is there’s no real competition. If there was some other option-“

“Like a public option?” one of our group helpfully suggested.

“Yeah. Unless there’s another option they’re always gonna screw us over.”

This guy had never heard of municipal broadband but he arrived at the idea on his own in less than 30 seconds, on camera. We couldn’t have staged it better. That’s how sensible and universally obvious the concept of municipal broadband is. That’s why we were walking one mile through the downtown corridor as slowly as possible: to protest Comcast’s sluggish service and sleazy business practices and demand our elected politicians get to work building a public option. 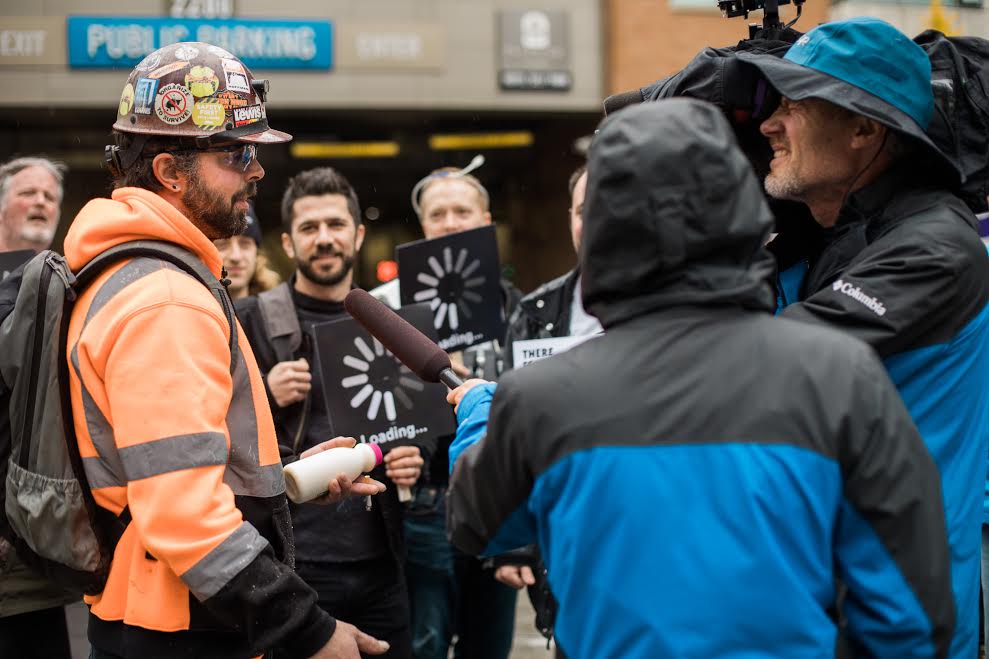 Bring up Comcast with anyone in Seattle and odds are you’ll get a horror story: lousy customer service, corrupt billing practices, slow speeds and frequent outages. This is not merely anecdotal; last month the Washington state attorney general filed a $100 million lawsuit with Comcast for deceptive business practices, alleging 1.8 million violations of consumer protection law. The FCC fined them $2.3 million for improper billing, the largest civil penalty they’ve ever levied for such offenses.

Comcast always figures out some new way to be the absolute worst. Example: a couple weeks ago I got an email from them announcing that they’re imposing data caps on Washington customers beginning next month. This new fee has no technical or financial justification and broadband CEOs have basically admitted that the only reason for data caps is to maximize profits. It’s a fictitious charge conjured out of thin air to siphon even more money out of their customers. Even the FCC opposes data caps. If Comcast truly wanted to charge for actual usage then based on their own metric I’d be paying about one-fifth of what I do now. But it never works both ways when you’re dealing with a monopoly. (CenturyLink also has data caps).

The cost of transmitting data gets cheaper every year while technical capacity increases, so what are they doing with all the extra money as their overhead drops exponentially? They’re spending billions on stock buybacks instead of reinvesting it in infrastructure to provide better service in neighborhoods like mine on the Southend. Stock buybacks, considered a form of illegal stock manipulation until the Reagan administration, are a way to artificially drive up a corporation’s value in order to enrich shareholders while preventing any wealth from “trickling down” to customers and employees. Local billionaire gadfly Nick Hanauer stated it bluntly: “Stock buybacks are killing the American economy.”

I looked into data caps last year for this video I made after Mayor Murray and Chief Technology Officer Michael Mattmiller punted on municipal broadband. The city released a study showing solid feasibility, high upsides and lower costs than previously estimated. Murray and Mattmiller read that very same study and decided it couldn’t be done. Too risky, too expensive. This was no surprise considering Comcast donated heavily to Murray’s last campaign against incumbent mayor Mike McGinn, who supported municipal broadband.

Additionally, council president Bruce Harrell used to work as a lawyer for CenturyLink (then US West) and though he represents the South Seattle district most impacted by poor internet service his support has been nonexistent at best; he didn’t bother to show up for the last vote on municipal broadband. Back in 2012 he even cut a promo video for Comcast’s “cheap internet for poor people” program.

Last year Murray and Harrell negotiated Comcast’s latest ten-year franchise agreement with the city, which they abruptly renegotiated after catching wind of the much better deal other cities have struck with the telecom. Nevertheless, Comcast has resisted implementing the modest gains stipulated in the new contract; Emerald writer Reagan Jackson recently wrote of the runaround she got attempting to acquire the promised free service for her non-profit. (They finally turned it on after her article came out, a minor victory for independent, grass-roots journalism.)

Despite Harrell’s glaring inaction and Murray’s behind-the-scenes arm-twisting, this month the council voted unanimously to add municipal broadband to the city’s Comprehensive Master Plan, a road map for the next two decades of growth. It’s a promising step forward, but ultimately a symbolic gesture that must be followed with concrete legislative action. After all, in the last council elections every single candidate went on record as supporting municipal broadband. With that level of lip service you’d expect they’d be breaking ground next week, not scrounging around for $300,000 in the budget for a ten-year implementation plan.

It was the right time for a Slow Internet Walk. We’d publicly call out Comcast and put our councilmembers on notice. In light of the lawsuits, the data caps, the stock buybacks and the continually crappy service—especially in historically redlined and segregated Seattle neighborhoods—the telecoms giants plead the case for municipal broadband better than we ever could. The Slow Walk would serve as a visible reminder that the internet should be treated as a utility, not a perennial cash cow for overreaching, underperforming monopolies.

Some heard of the event on Facebook or Reddit or through the efforts of advocacy group Upgrade Seattle, the vital force of the movement and a crucial repository of up-to-date information on the effort’s legislative history and progress. I circulated a promo video. Only about a dozen folks showed up, which was better than I expected for a rainy weekday at noon. The important thing was that we undertook the walk. Municipal broadband is admittedly a “boutique” issue; there are many other life-and-death causes in dire need of activist support. But nearly everyone I know despises their internet provider and supports a public option—people have told me they’d gladly spend more on municipal broadband as an “eff you” to Comcast—so I felt that we were walking on behalf of multitudes. 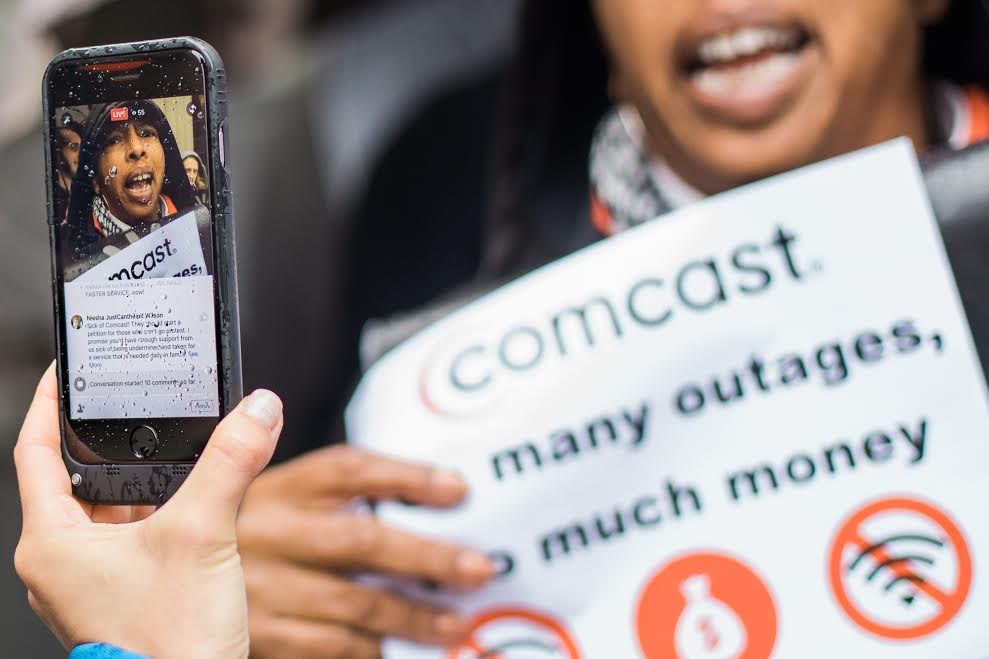 Other than the construction worker, many other people shouted words of solidarity: “Comcast sucks!” “We need municipal broadband on the Eastside, too!” Television reporters from KOMO and KIRO followed us on our plodding journey (approximately a mile in an hour) along with reporters from the Seattle Times, Crosscut and the Stranger. (Geekwire and KIRO radio also previewed the event). Even if you didn’t agree with the cause you’d have to admit it was damn funny, this ridiculous procession ambling slowly through downtown as the rest of the city whizzed past, a small clutch of camera people and reporters buzzing around us.

When we got to City Hall we ascended the stairs at an absurdly slow rate, “buffering” for the cameras. Devin Glaser of Upgrade Seattle, clad in a costume of blinking lights, a router and Ethernet cables, presented Kshama Sawant and Rob Johnson with homemade “Municipal Broadband Champion Awards” for their efforts in pushing for the $300,000 implementation plan. (Definitely call all the other councilmembers and urge them to support this, by the way.) 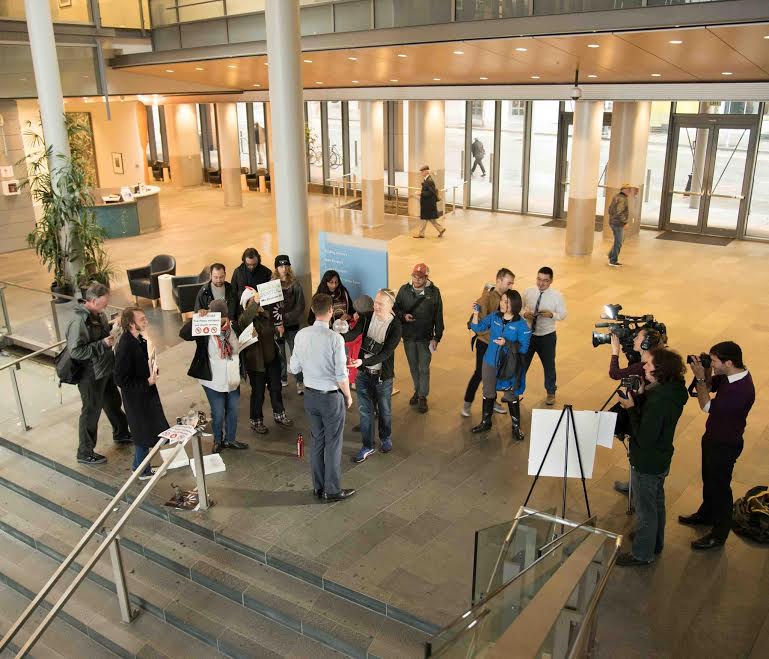 It’s easy to become accustomed to crappy internet; mine goes out so often that I constantly refresh pages and re-establish a connection without even thinking about it anymore. We’ve grown to accept so many unnecessary inconveniences at the hands of these wealthy mega-corporations that we unwillingly entrusted with all the information in the world. Once I spent five minutes trying to load a six-second Vine video before I realized the absurdity of what I was doing. Last week my internet went out between the time I posted the Slow Walk video to Twitter and refreshed the page: 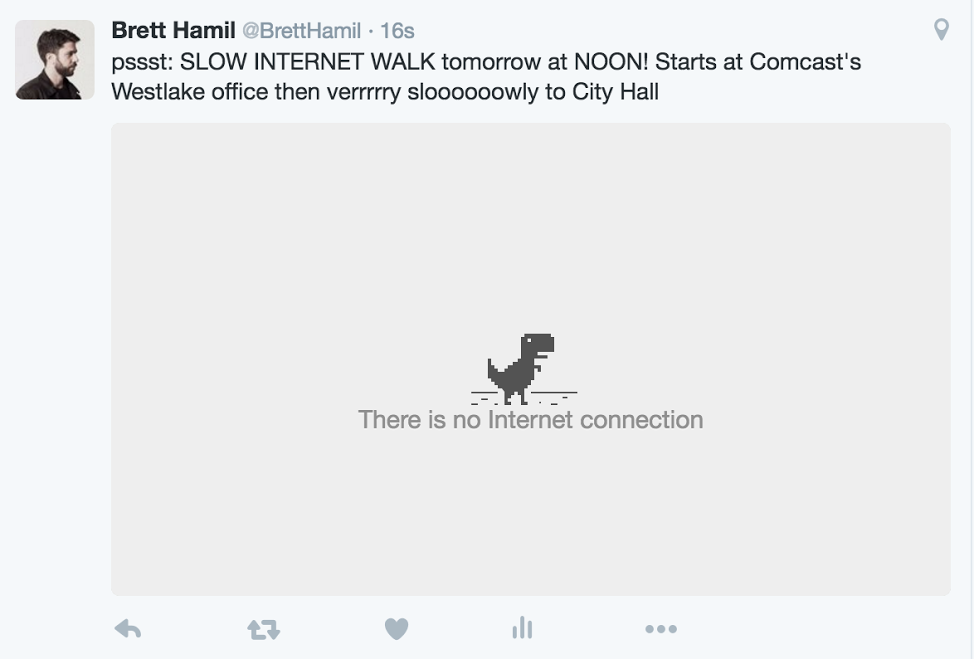 Like many infuriating things we’re forced to stomach—a Republican state senate, Bertha, the Mercer Mess, Tim Eyman—bad broadband blends in to the background noise of our daily civic life. Sometimes all it takes is a visible reminder that we don’t have to tolerate it, that there is another option. This time that reminder came to Seattle in the form of a small group of people walking very deliberately through the city and ending up on the evening news. In this regard, the Slow Internet Walk was a success. 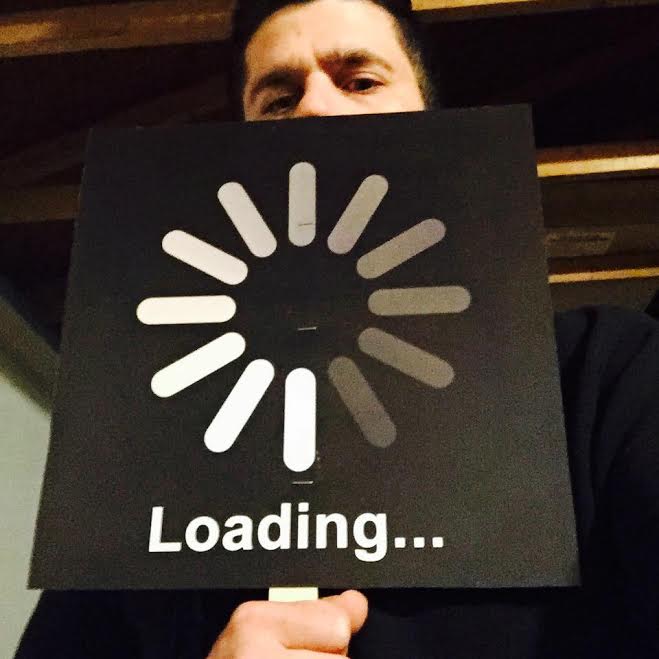 The day before the event I printed up signs depicting the all-too-familiar loading wheel that plagues so many victims of our regional telecom duopoly. When the employee at the copy shop brought the image up on her computer she paused for a few moments, staring at the loading wheel on the screen and waiting.

I realized what was happening and told her, “No, that’s the actual image.”

She asked me what the signs were for and I explained the idea behind the Slow Internet Walk.

“That’s great,” she said, “We had Comcast and it was horrible.”