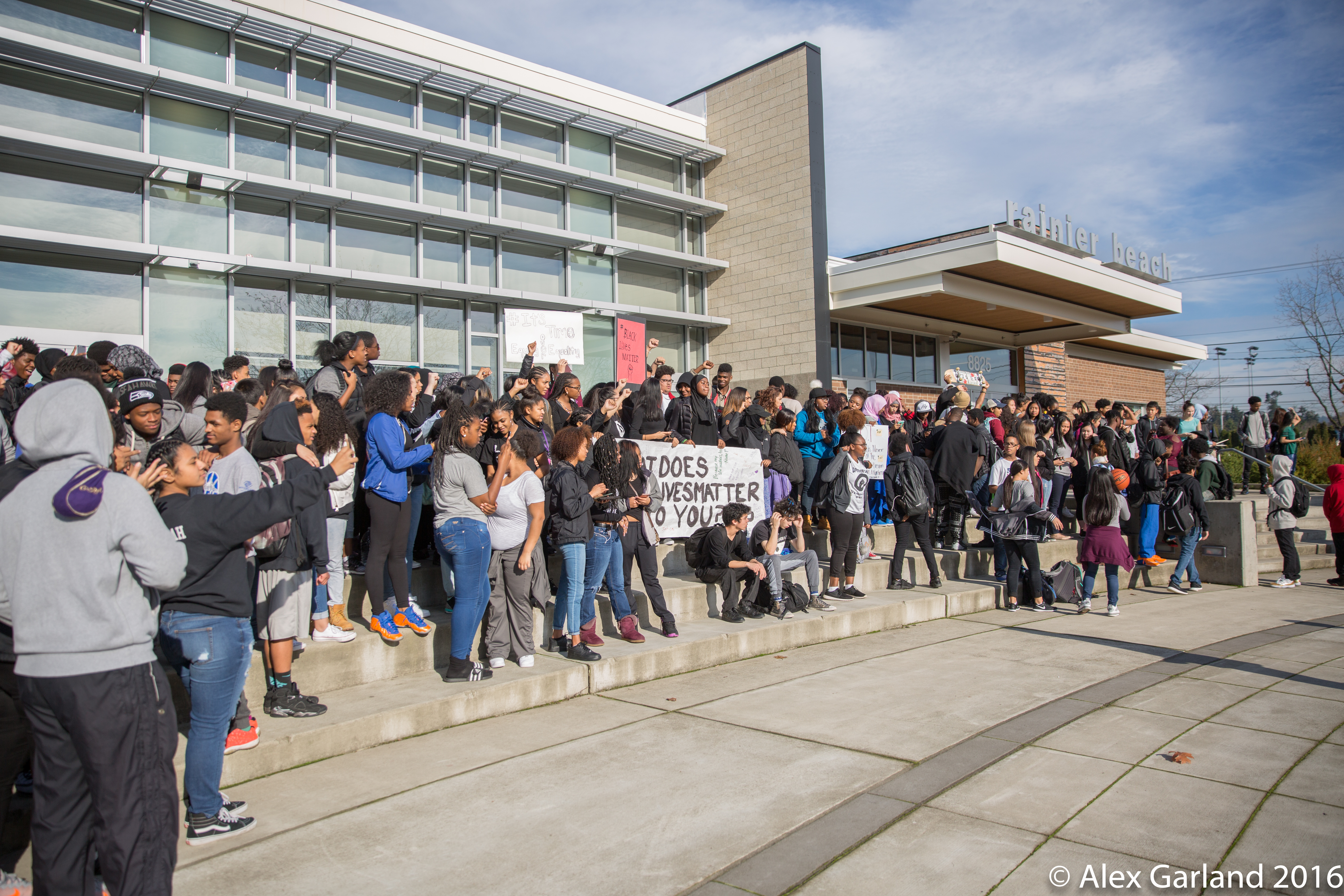 “Got Hope, Got Freedom, Got Love, Got Hope,” was the rally cry that echoed onto the steps of the Rainier Beach Community Center’s plaza, at 12:30pm when hundreds of students from Rainier Beach High School (RBHS) staged a walkout in protest of the election of President Donald J. Trump.

“We had to organize because we just elected a man who is totally against our community here in the South End,” asserted 17 year old Zion Thomas, president of the Gay Straight Alliance at RBHS, and also an active member of the Black Student Union. “He is not for Muslims. He is not for immigration. He is not for so many things that we as the most diverse zip code in the nation supports.”

Thomas said he and his friends were inspired by the student walkouts at Cleveland and West Seattle high schools that took place the previous day. They agreed on the idea of Rainier Beach High students staging its own walkout, and decided to only involve students in the planning. No teachers or other faculty were to know a thing.  They created the hashtag #ItsTime as coded language for planning the walkout, and spread it to other students on Facebook, Snapchat, Twitter and other social media.

Typically, students walking out of class at the midpoint of the day is an ire inducing offense, however, the action drew admiration from at least a few RBHS teachers.

“I think that there’s nothing more pure than student ignited movements,” said Manuel Cadenas, a Spanish teacher at RBHS. He looked on as SPD officers directed traffic at the intersection of Henderson and Rainier Avenue and served as escorts to the swarm of students who trekked a quarter mile from the high school to the Rainier Beach Community Center.

“I think every high school teacher wants to see their students growing into young politically active adults. We’re very proud to see them take the lead in speaking out against what they see are injustices,” said a teacher who asked to remain anonymous.

As students gave voice to their frustrations at what they saw as a racist, xenophobic, transphobic president-elect in Donald Trump, that teacher was probably not the only one in the crowd to rekindle the optimism that he’d lost after election night.

“Look at the maps at how people 18 to 25 voted on Tuesday. It gives me an awful lot of hope for the future.  Some of the things that might pass for okay right now by politicians, are going to be recognized for being untenable, intolerable,  and obscene in the near future,” he said, emphasizing the agency of some of his students in orchestrating the event.

That agency was on display as students alternated speaking at the microphone, emphasizing that the walkout was more than a release valve siphoning off anger induced by a Trump Presidency, it was an exercise in movement building.

“People say this walk out doesn’t mean anything. How can a few kids make a difference? Well the Freedom Riders had 13 people on the bus, and they changed the laws,” said a student named Nirae as she took the microphone, referencing the small band of civil rights era activists who compelled Southern states to enforce the desegregation of public buses.

Soon after another Rainier Beach student took the stage, and leading her fellow students in chanting the words of civil rights icon Assata Shakur:

“It is our day to fight for our freedom. It is our day to win. We must love each other. We have nothing to lose but our chains,” students repeated as they held their fists in the air.

For some in attendance the action was also a vehicle to address negative perceptions others harbor of them.

“ Rainier Beach High is wrongly known only for basketball, and being ghetto, so us doing this protest shows we’re way more than that and we’re not going to stand down from this sexist, racist idiot in the white house,” said Beria Heyman, who spoke at the rally, saying Donald Trump did not want to see Hurricane Beria.

Heyman expressed pride in seeing so many unfamiliar faces from her school participating in the demonstration as she scanned those in attendance which included Black, Asian, Hispanic, and a sprinkling of white students. She noted she was grateful for the outpouring of support for the walkout offered by the student body.

One of those supporters was Muslim student Shukri (who declined to give her last name). She participated in the walkout to show that as a Muslim, she would not tolerate the demonization of her faith that emerged out of the presidential campaign.

“We need peace and respect.  Being Muslim means we love everyone. We love Christians. We don’t need Donald Trump,” she said.

Aware the walkout might be dismissed as a one off doing very little else but serving as collective venting, its head organizer said it was a catalyst for more to come.

“This one day is going to start a chain reaction of many more days. I’m positive that workshops at our school will start because of this.  I’m positive people who wrote our generation off will now start dialoguing with us.  We have to solve the problems in this country is having, and we can only do that together,” said Thomas.

Cadanas also shared that many of his students have already identified issues they want to advocate for.

“I have a lot of students questioning our voting age of 18. They think it’s a little too high,” he said. Propositions to lower the voting age to 16 for local elections recently failed in San Francisco, but passed in Berkley, CA.

As the rally progressed, Cadanas looked on while students continued to speak on the front steps, with one exhorting her fellow students as the generation that can change this country, the Nas classic If I Ruled the World blurred from speakers in the background.

In regards to his students, Cadanas, joined many adults in attendance anxious about the nation’s future in thinking:  If only…