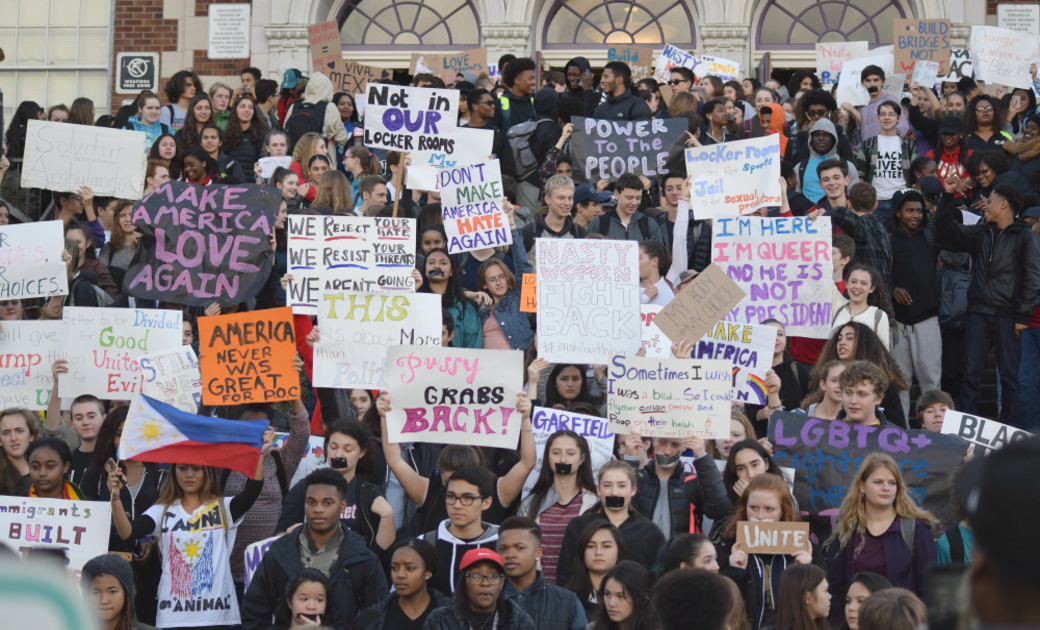 As I walked down the streets of Seattle with thousands of other students, one thing united us all: our disapproval of the President-Elect, Donald Trump. “Love trumps hate” and several other chants bellowed throughout Seattle as students of all backgrounds collectively exercised their right to peacefully protest.

On Nov. 14, the walkout began as students across the Seattle area left their schools to gather at Cal Anderson Park on Capitol Hill. Sequentially, a march proceeded as students flooded the street towards the Westlake area of downtown Seattle. Students could be seen holding signs touting slogans against Trump’s stances on issues that had propelled him to an unexpected victory over Hillary Clinton last week.

Like many other people across the country, I am deeply disappointed by this election season. I am appalled by the many acts of injustices that have occurred in this country and that will continue to be invoked by Trump’s controversial rhetoric. These injustices include but are not limited to the onslaught of racial discrimination against students of color across the country as well as religious hate crimes.

“I’m scared for my family and friends,” Franklin High School senior Michelle Yee said. “A lot of what Donald Trump has said during his campaign targets the people I love.”

Though the walkout was an act of defiance towards Trump’s agenda, I do believe that students came together to fight systems of oppression that have been long established in aspects of this country. I saw a glimpse of hope for our nation through the young people in our city that proved that we are indeed not the leaders of the future, but of the present.

It is clear that this election said has spurred stark, contrasting emotions from people across the political spectrum. Trump supporters are eager to see how he will “Make America Great Again” and Clinton supporters are upset with the election results since she reportedly won the popular vote. This post-election is a time of reflection and healing above all other things.

Many of the students that were not not able to vote found the walkout to be a powerful way of self-expression. One of those students was Cleveland High School Associated Student Body President Cornelius Cambronero.

“I feel that it was important to be out there creating change for our future, for the future of Seattle, and for America,” Cambronero said. “I have the ability to influence and change the community around me.”

Cambronero said that the walkout has shown him that young people do have the power to help bring change though age may be a barrier. He believes that the biggest thing that students can do to bring progress is to listen to each other and have discussions about issues instead of turning to violence and hatred.

Though we cannot change the election results, it is our responsibility as Americans to be impactful within our own communities that we are part of. Marching is great, but we have to manifest our beliefs of freedom and justice through our everyday interactions.

Throughout the walkout, I couldn’t stop myself from pondering a question  that were at the back of mind. If Clinton had beaten Trump during the election would there be people in the streets protesting against her?

No matter who would have won the election, disagreement will always remain on top as  the real victor. The values that people identify as progress in Seattle are not necessarily the same for people living elsewhere. These differences are what make our country so unique in manner, and only motivates me to continue to have discussions between people that I may disagree with.

I believe that is in our best interest to continue to fight for our education and rights during this political transition as that it is how we uphold true democracy in our country. It is essential that these battles should be fought with non-violence, as acts of hatred will only consume our consciousness.

As social activist and historian Howard Zinn stated in his 2002 autobiography  You Can’t Be Neutral on a Moving Train ,“And if we do act, in however small a way, we don’t have to wait for some grand utopian future. The future is an infinite succession of presents, and to live now as we think human beings should live, in defiance of all that is bad around us, is itself a marvelous victory.”

2 thoughts on “I Walked, So I Could Stand”