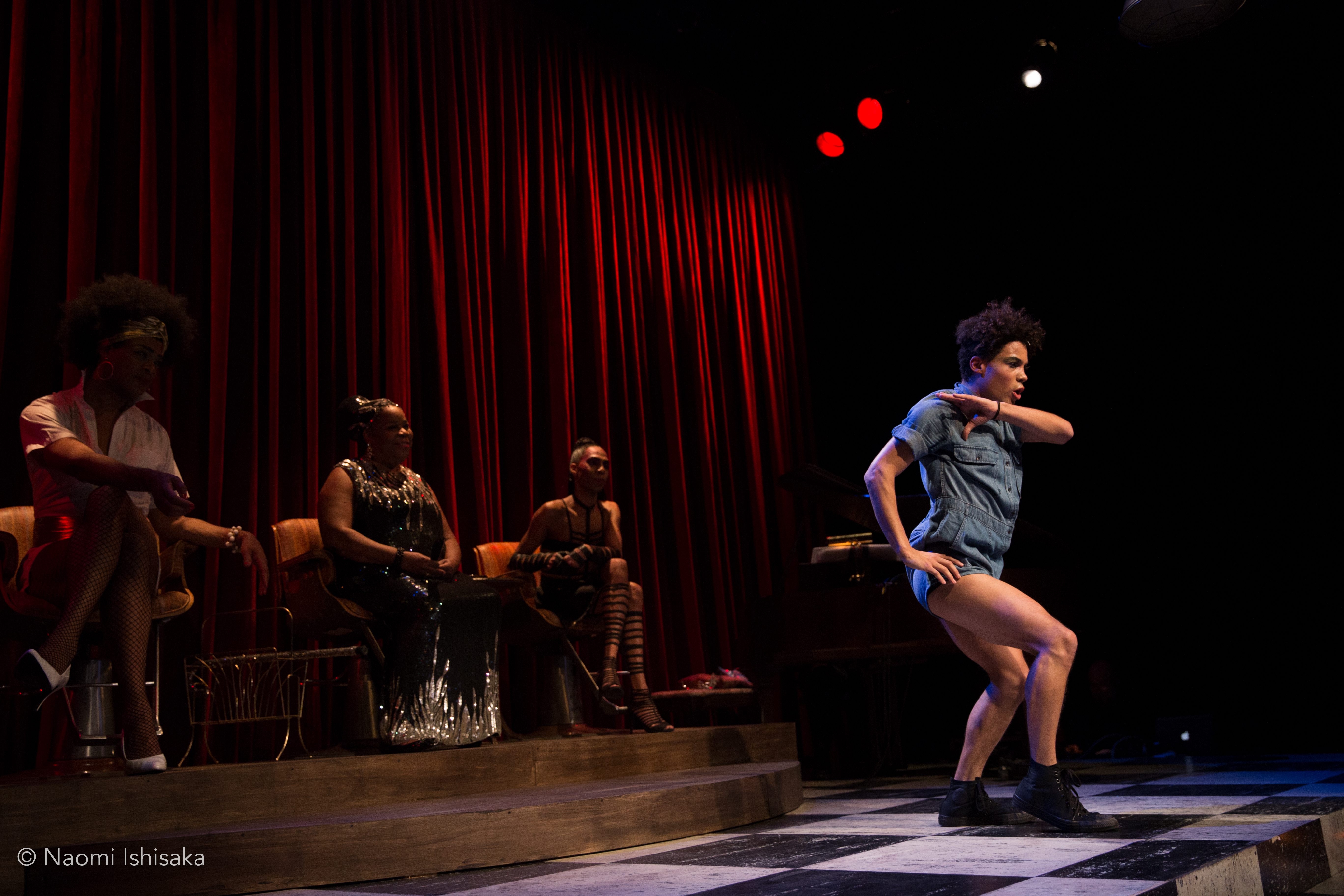 Only days ago, I was invited to write a review of House of Dinah, a deeply emotional and surreal theatrical performance about five intergenerational Black Queens written by acclaimed Bronx-born playwright, Jerome A. Parker, and directed by Intiman Theatre’s Andrew Russell featuring the work of Detroit-raised/Seattle-based choreographer and teaching artist, Dani Tirrell.

I had the privilege of talking with Jerome and Dani on December 6th at On the Boards just thirty minutes before the show was scheduled to preview for the first time in Seattle and the conversation was just as contextual as the performance itself. With so many stories to tell of intersecting struggles from divergent perspectives and complimentary artistic mediums, House of Dinah proves itself as worthy of our undivided attention as the artists behind its daring execution. This is definitely one show you don’t want to miss.

The creative team behind House of Dinah brings together the art of Vogue runway, magical realism and Blues remixed to House and Vogue in this parable of unapologetic queer and trans-feminine survival. A masterfully articulated ethos of feminine power, House of Dinah is a radical cleansing of injustice planting seeds of resistance one Queen at a time.

The experience takes us back to church revival where we follow the gospels of Dinah Washington told through the reveries of three veteran Black Queens of the Ball scene on a mission to raise the consciousness of a generation eager to shine at the helm of a movement on the rise once again. House of Dinah delivers a stunning account of courageous efforts largely led by trans womxn of color throughout the Civil Rights movement to combat police brutality, homelessness, the HIV/AIDS epidemic, trans-misogyny and exploitation and to preserve the legacy of battles fought by these womxn that is often overshadowed by the stories of their straight and cisgender counterparts.

Upon entering the theater, I am enveloped by shimmering walls and crimson velvet from floor to ceiling with a runway in the middle of a diner leading to three magnificent thrones cast in shadow. The lights come up on a sharply dressed pianist filling the room with jazzy sounds of the 1950’s and in walks this Queen giving us Bessie Smith vibes as she begins to sing her story.

Dinah Washington, a legendary Black American jazz and blues singer with Alabama gospel roots most notably famous for producing such hits as “What A Difference A Day Makes,” is remembered as a Queen with a voice that could turn water into wine and revered as a divine Mother that brought strength and wisdom in times of fear and uncertainty.

“Dinah’s voice protected us. Deep purple. Whispers of green. There was nothing blue about her songs,” says Mother Tamika, played by Kathya Alexander, as she recounts her journey to liberation with the voice of Dinah to guide her to salvation out of the kitchen and into the Ball scene where a Queen could be a Queen. “We all held court in them days. We celebrated because we were free.”

As the Queens take their place at the head of the runway including Gladys, played by Brace Evans, and Felicia, played by Adé A. Cônnére, we are introduced to a young sistah by the name of Wilhelmina, played by Stefan Richmond, who we can clearly tell is still trying to earn the respect of the Mothers, but has a fire in her belly that rages when she graces the stage with her dancing moving myself and several others to tears.

Another young sistah given the name Humberta by the Mothers, played by Seattle-based dancer, Randy Ford, blows in from a storm seeking refuge from a truth she cannot bring herself to name and threatens to shake things up in the House of Dinah. A designer princess with a razor sharp wit, a pink bob that’s been through hell and back, one shoe and nothing more to lose still manages to lay everyone’s edges to rest with a Vogue performance worthy of the Gods. But, is it enough for the Mothers of the House of Dinah?

The genius of Jerome A. Parker is apparent throughout the telling of this story. He uses both the body and the voice to develop a common language centered around the experiences of Black trans womxn. A richly diverse intersection of culture, ritual and fierce personalities, the Ball scene was where queer and trans folks of color could converse with one another through performance with dignity and authority uninterrupted by systemic forces that sought to take those very things away from them.

The title and choice to center the music of Dinah Washington in this piece is a solid nod to the influence this prolific queer icon had throughout her career on the hearts and minds of queer and trans artists and activists of color during the 60’s, 70’s and 80’s. In the tradition of Ball culture, houses are typically named for famous couture designers, many of whom are white males. To name a house after a queer Black Womxn not only affirms and uplifts Black feminine identity, this also amplifies a voice that has grown faint in the modern Ball scene as the popularity of Vogue increases among non-Black consumers of our beloved culture. This is why projects like House of Dinah exist.

This was an incredibly ambitious undertaking considering the level of experimentation involved. Dani Tirrell manages to weave Vogue throughout the performance as more of a subliminal language than a series of stand-alone performances with more subtext than the average mind can read, but the actors deliver with enough precision and soul to leave you literally breathless. Amid scores of snaps from the audience and the occasional “YAS, girl!” and “You bettuh werk!” brown bodies elongated like wingspans and folded into each other like collapsing 3-D geometric shapes only to burst open in emotionally-gripping musical monologues like fireworks on stage. It was truly ninety minutes of sparkling graffiti in motion.

Throughout this captivating story, enough shade is exchanged among these Queens to eclipse the entire sun, but the reading is what really gets you. The Mothers don’t waste their time and energy on petty small talk except to put a mortal in check for disrespecting the rules of their House. This ain’t no coffee house poetry or back page astrology reading. No, this reading can’t tell your future, only of how the past is holding you back from ascending to a higher purpose.

“You’ve got to walk before you can run,” said the elders. “You gotta face the dirt before you can rise from the grave. Sing me a song made of your guts,” they commanded. You see, this is more than a performance. This is a healing, a conjuring, a truth-telling, a calling out, a raising of the ancestors of Ball to call our young Queens home.

In closing, I leave you with a testament to just how raw Mother Dinah truly was: Dinah Washington (Live) | “Send Me To the ‘lectrict Chair”. May she rest in power with the Queens of her time and those who came before. Welcome to the House of Dinah where we serve “coffee,” not tea.

House of Dinah runs from December 7th through December 11th at On The Boards. Tickets are available here.