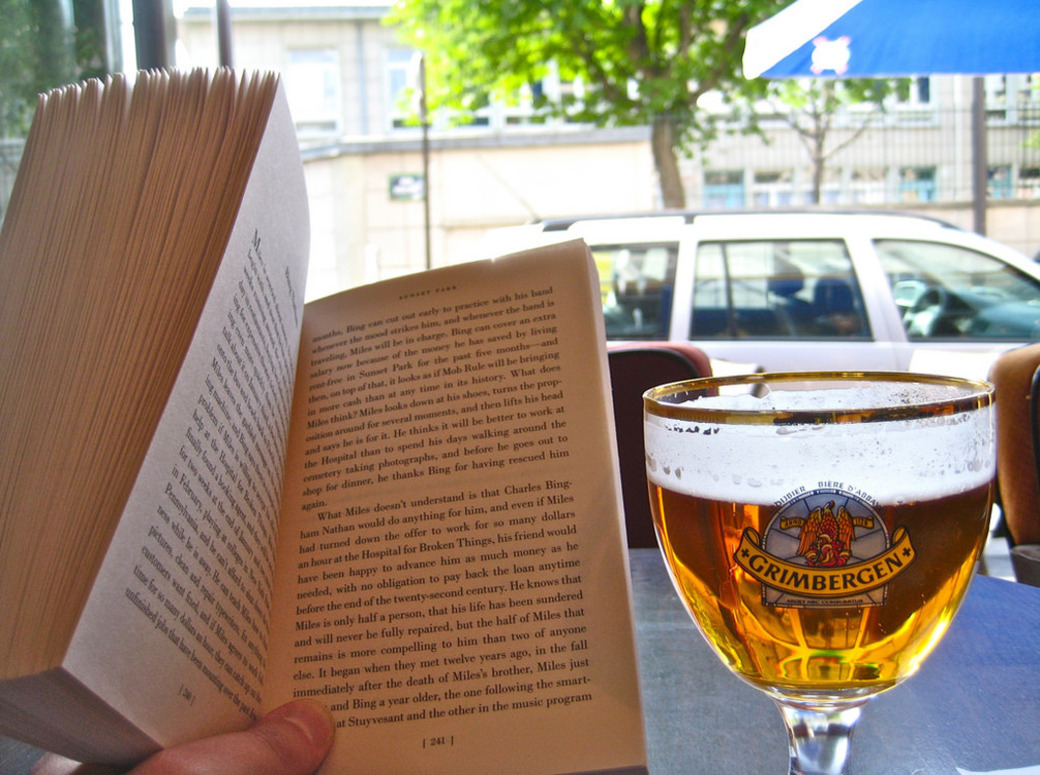 Though the night was windy, cold, and rainy, a devoted audience of thirty to fifty happily followed the artists from location to location.  It was a wonderful opportunity to appreciate the power of words and stories, and to experience the delightful food, drinks, and atmosphere that Hillman City’s bars and restaurants have to offer.

The event began at 5:00 p.m. at Spinnaker Bay Brewing, where a crowd of about thirty sipped complex, house-made beers.  The evening’s first reading, “Mole Biopsies and Other Love Notes” by Corina Zappia, was a spare, swift, and powerfully funny reminiscence about growing up as the daughter of an oncologist, in a home where tissue samples are kept in the refrigerator, and the removal of skin growths is both an expression of family caring, and a rite of passage.

Following Zappia was Gretchen Schrafft, whose short story, “The Diaphanous Casting Agency,” captured a passage in the life of a restaurant-owning mother who remains haunted by her youthful, show business ambitions. Here, a present full of unfinished taxes, dancing children, and quirky kitchen staffers becomes overwhelmed by memories, both painful and wistful, of a lost California.

Finally, Anastacia Renee, a self-described “queer super-shero of color,” closed out the first quarter of the evening with a devastating selection of poems. After starting with an incisive and jocular piece about Donald Trump and his predilections for sexual misconduct and runny eggs, Renee moved on to a suite of intense poems about the experience of raising young, black boys in a dangerous and unjust country.  Dramatically delivered and vividly evoked, Renee’s poems were as powerful and as undeniable as ocean tides.

Then, it was on to Big Chickie, where the Lit Crawl audience, now approximately three dozen strong, mixed with a handful of local families out for dinner.  Cheerful, small children in sparkly clothes capered in the aisles while the writers and their fans settled down with trays of chicken, kale salad, beans, and rice.

At about 6:30pm, poet Thomas Walton took the stage.  Delivered with laid-back humor, Walton’s many short pieces were packed with images of plantlife, birds, cityscapes, and working people, and often had a satisfyingly Beatnik flavor. With sharp moments of humor (“What a dick sunset can be,”) and delightful absurdity (“From this paralysis, a new paramecia of wonder,”) Walton’s reading was a crowd-pleaser.

Next on the Big Chickie stage was Nadine Antoinette Maestas, who read poems about mothering, nature, and New Mexico.  Often favoring common, single-syllable words, in Maestas’s work, quick, repetitive beats play against the rhythms of longer, looping sentences, creating layered patterns of sound, intricate mosaics of meaning– and some of the finest work of the evening.  Poet Sarah León was the last of the Big Chickie readers. Drawing on experience as a daughter and as a social worker, León told moving and deeply introspective stories about guilt and loss, set in parking lots, alleys, and hospital waiting rooms.

At around 7:30pm, the festivities moved on to the smallest and coziest of the venues, Adugenet Ethiopian Kitchen.  Here the crowd ordered plates of tibs, greens, and lentils, and grapefruit-sized bulbs of golden honey wine.

Jekeva Phillips opened the readings with a selection of poems about family, memory, cooking, and longing.  Rooted in sensory experience, and at once carefully-crafted and direct, Phillips’s smart, accessible poems are the kind that both die-hard literature fans and their not-so-bookish friends can come together to enjoy.  Poet Bonnie Wolkenstein followed, with a suite of confident and relatable meditations on love and sex, death, and illness.

Finally, Fernando Pérez finished the set with a truly heart-stopping group of poems that evoked the American Southwest.  Here, images and ideas taken from family history, local tradition, religion, and desert ecology blend together into something at once earthy and luminous.  Pieces about the deaths of black men, and the collective bearing of grief, brought gasps from the audience.

The last stop of the night was at The Union Bar, which was already packed and loud when the Lit Crawl crowd began to stream in.  Fortunately, the first reader of the set was poet Lydia Swartz, who had no trouble seizing the crowd’s attention with her urgent, funny, exquisitely-wrought words.  “Don’t howl like a mime, don’t howl like dentist, howl like the sun!” she cried, and at the end of her reading, the crowd obliged, heads thrown back, baying like a pack of wolves.  Natalie Martínez followed, with poems full of short, careful lines that invite examination of each individual word, sound, and thought, and delivered an undeniable emotional punch.

The final reader of the Union Bar set, and of the evening, was Daemond Arrindell, who brought the house down. Both a commanding stage performer and an extraordinary wordsmith, Arrindell’s reading was nothing short of operatic: hushed and then soaring; confessional and then thunderous. With poems about childhood (“I wanted to be the first Black Jacques Cousteau,”) teaching at-risk kids, and writing life, Arrindell kept the room in absolute thrall.   And at the end of his set, everyone in the Union Bar, be they Lit Crawlers or regulars, clapped and cheered.

It was, in sum, an extraordinarily good night to be in Hillman City.

Organized by Greg Bem, Jeanne Morel, Raanan David, and Jamaica Baldwin, last Saturday’s event was the fourth Rainier Valley Lit Crawl.  Since the first Rainier Valley Lit Crawl, which was held in Columbia City in March of 2015, the event has continued to draw both exceptionally talented slates of performers and steady crowds. The next Lit Crawl has yet to be scheduled, but it’s sure to be equally marvelous.

Featured image is a cc licensed image attributed to borkur.net