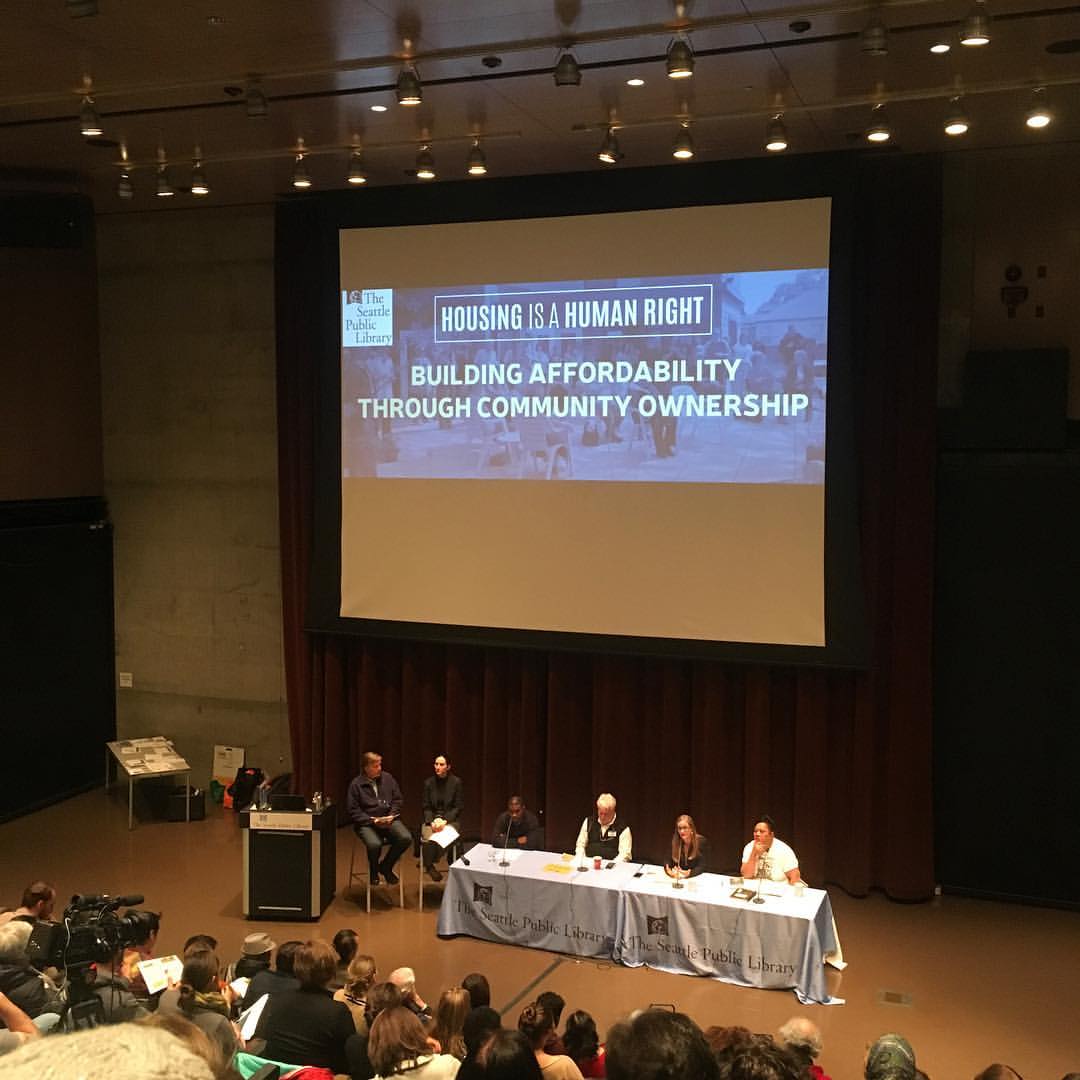 by Cliff Cawthon and Kelsey Hamlin

Housing is a human right, though to an increasing number of Seattleites it’s a dream deferred, wilting in the sun. To solve this issue South Communities Organizing for Racial Equity (South C.O.R.E.), a coalition of community organizations, hosted a Housing Affordability Summit on Thursday evening that drew 300 people to downtown’s Central Library.

The event was meant to introduce alternative methods of affordable housing through community ownership, creating long-term opportunities for those who face unstable housing situations.

The panel shared principles for community ownership and community-led strategies to curb displacement — particularly through Limited Equity Housing Cooperatives (LEHCs) and Community Land Trusts (CLT’s). They hoped these ideas could take root and flourish as a robust movement-in-policy in both Seattle and beyond to address homelessness.

Limited Equity Housing Co-Ops are similar to consumer or worker co-ops, except housing-focused. Imagine moving into an apartment but instead of a hierarchical relationship with a landlord, equity is built in your unit. You also have democratic decision making power in how your building operates.

That’s how LEHCs function. They also set restrictions on the price of the apartment as well, so more often than not, instead of exorbitant rent hikes, your rent increases with your income and the prices of the apartments aren’t just made out of opportunism.

Over the summer, the City of Seattle asked Focus Strategies to do a homeless system performance assessment. One thing the report analyzed was the demographics of the city’s homeless population versus that of the city’s demographics.

The homeless sheltered population in 2016 was 30 percent Black, more than four times Seattle’s general Black population, which was seven percent in 2015.

Nonprofit land trusts were then introduced, a concept many in Seattle have already begun to implement. Giulia Pasciuto, a policy analyst with Sage said that the community land trusts “expand[ing] beyond homeownership because, a lot of folks apart of our South C.O.R.E. coalition can’t even think about affording home ownership….we need to grow as a region but we need to grow in a way that benefits the people who live here and community control is one way to do that.”

Sandra McNeil, with T.R.U.S.T. South LA urged that a long-term solution requires land trusts and purchasing occupied buildings in order to create democratic and equitable control for their residents.

Reicher also noted that “going through [housing] struggles, gives you the confidence to go forward with other things.” Cooperative Housing’s empowerment also played out here in the Seattle Metropolitan area.

Violet Lavatai of the Tenants Union of Washington and board member of the Benson East Support Group Board recalled the formation and significance of the tenant unions [TU] that led to a co-op right in our own backyard.

She described how a group of renters in Kent banded together with the Tenants Union and Low Income Housing Institute to purchase their complex after the original owner stated plans to sell it.

For many in the audience, the concept of renters buying buildings to own rather than simply moving elsewhere when the property owner decides to cash-out proved foreign.

After examples from New York and Los Angeles, Africatown Director Wyking Garrett shared a video showcasing the work of his organization. Africatown is a community, cultural and development organization, one Garret characterized as a center of preservation and growth for the ‘Black Belt’ of Washington.

One project Garrett referenced was the Liberty Bank building development, an affordable housing endeavor that the Emerald has previously covered. Garrett pointed out that a part of making these visions of community-driven housing affordability require a commitment to fund equitable development. According to Garrett, Seattle’s Racial Equity Taskforce had previously suggested an Equitable Development Fund but nothing materialized so in a later interview, he framed it in a way many of those subject to displacement can understand:

“When you look at over $500 million to a billion of [corporate] development just coming to the Central District, you have to set a number of [around the same amount] over five years [for equitable development].That’s a number for you.”

The meeting ended with buzz. Most of the crowd identified as renters, or formerly unhoused people. Saldaña told the crowd organizing is key because “the more that tenants have a real say in their residence, the community has a real say…We need to be able to give ourselves the authority to take land back.”

One thought on “Summit Highlights Community-Driven Solutions to Curb Displacement”