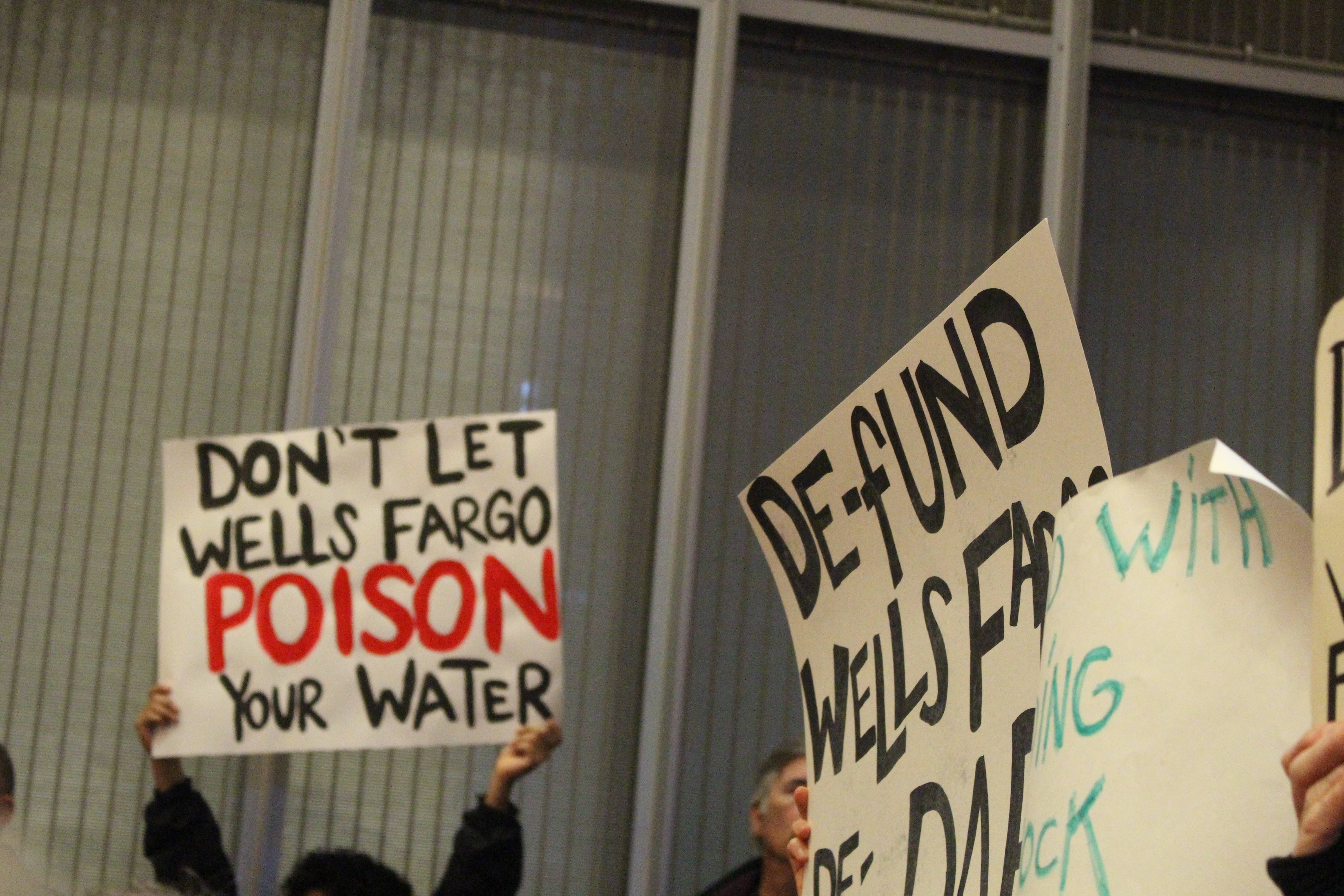 After Mayor Ed Murray and two Councilmembers sent a letter to Wells Fargo directing Seattle to end negotiations with the bank, Councilmembers introduced and referred a bill Monday that would do just that.

“I hope the city seeks to create long-lasting relationships between Indigenous and nonindigenous peoples,” said Rachel Heaton from the Muckleshoot tribe.

Currently, Wells Fargo won the bidding process to be a lender on the $100 million bond funding Seattle City Light. However, the city’s proposed legislation cites “a loss of confidence” in the bank as a trusted business partner, and the two parties have only been in negotiations. Their contract remains unsigned.

The legislation asks to add socially responsible banking performance as a factor worth at least 20 percent in the bidding process while also stating that Wells Fargo’s financial backing of the Dakota Access Pipeline (DAPL) conflicts directly with the City’s decision to support the Standing Rock Sioux tribe’s opposition.

“The city of Seattle has the opportunity to do something historic here,” said Matt Remle from the Lakota tribe, who is also a frequent local activist. “We’ll be one of the largest cities to divest from the pipeline.”

In fact, the legislation cited Wells Fargo as one of the largest contributors of DAPL, investing $467 million in project-level loans and revolving credit. The Council said this “has enabled the repression and intimidation against the nearly 200 Indian Nations, environmental organizations, journalists and other non-violent demonstrators.”

There were a number of people who had come to speak during the public comments section who had been to the North Dakota camps themselves. Paul Wagner, otherwise known by his Native name Cheoketen, said there were buckets of mace being sprayed at people like hoses.

“I’ve been to Standing Rock and seen many things there, much abuse,” he said. “We must decide if we’re going to move to a future of abuse. You are the ones making decisions for future generations.”

Jessica Ramirez had also been to Standing Rock, citing juxtapositions of violence and peaceful protest.

“It’s like a war zone” she said. “This is a form of resistance. If the City of Seattle wants to hold itself accountable as a sanctuary city, it needs to divest.”

All of this while, a landowner discovered a pipeline leak Dec. 5 that spilled more than 176,000 gallons of crude oil into Ash Coulee Creek, not far from Standing Rock.

Regardless, the DAPL-backing bank already has a larger, pre-existing contract with Seattle. It provides routine banking services for the city. Specifically, the bank manages more than $3 billion of Seattle’s operating accounting, including a bi weekly payroll of $30 million for approximately 12,000 employees.

Inside the proposed legislation, Councilmembers request the Mayor to not renew a contract with Wells Fargo for a contract extension that would last another five years. But the Council wants to “work with Wells Fargo Bank to get a voluntary debarment agreement for at least one year.”

Meanwhile, in North Dakota, even though the U.S. Army Corps of Engineers did not grant an easement that would allow DAPL to continue building under Lake Oahe — a part of the Missouri river that the water protectors rely on — the company (Energy Transfer Partners) said in a statement that they will disregard it and continue their plans as is.

Those wanting to offer support can follow the hashtag #DefundDAPL to stay updated. People are also asking for others to phonebank on Dec. 15.

Kelsey Hamlin is a reporter with South Seattle Emerald, and interned with the publication this summer. She also works with various Seattle publications. Currently, Hamlin is a University of Washington student, and the President of the UW Chapter’s Society of Professional Journalists. Hamlin is a journalism major at the University of Washington with interdisciplinary Honors, and a minor in Law, Societies & Justice. Find her on Twitter @ItsKelseyHamlin or see her other work on her website.