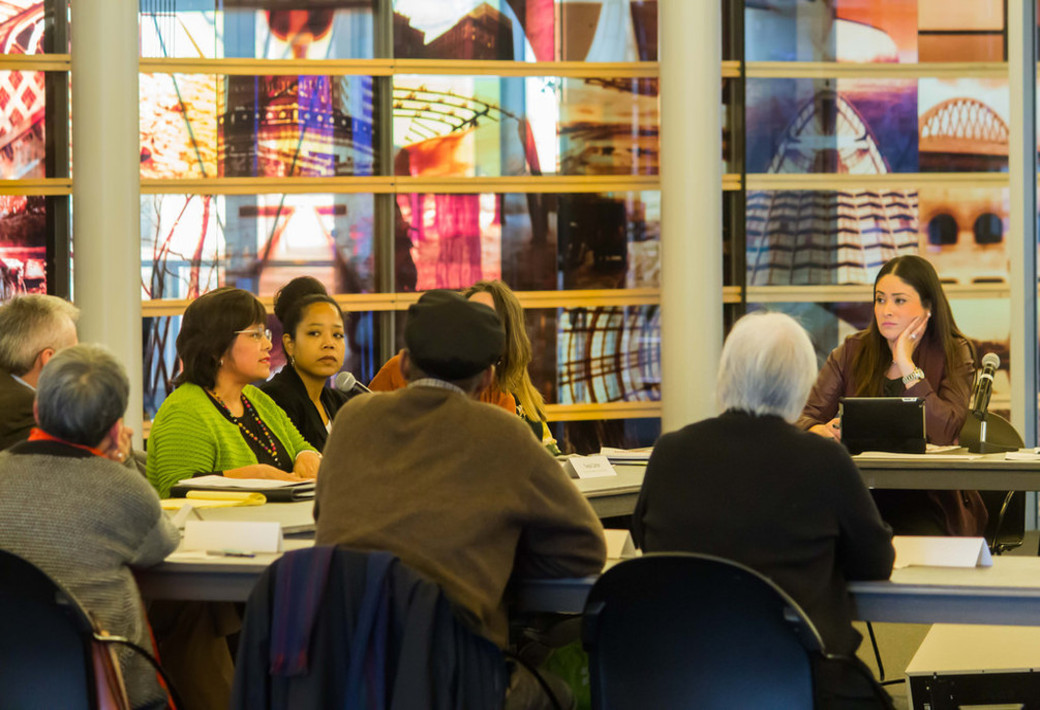 Wednesday morning leaders, activists, and advocates from Seattle’s Immigrant and Refugee community participated in a round-table at City Hall hosted by Councilmember Lorena González to discuss how their communities will potentially be impacted by the impending Trump presidency.

The discussion focused on concrete actions the city could take in support of immigrant and refugee communities stung by anxiety due to an incoming administration prone to racist and xenophobic rhetoric.

Hate crimes have risen nationally, a development believed linked to the “Trump effect”, according to a Southern Poverty Law Center report. This report documents that 867 such incidences were reported within 10 days of Donald Trump’s Electoral College victory, 32 percent of which specifically targeted immigrants and refugees.

While Seattle Police Bias Crimes Detective Beth Wareing recently claimed that Seattle has been spared a recent uptick in hate crimes, councilmember González said that the reporting of such incidents need to be improved.

The round-table included 16 organizations including, the Coalition of Immigrants, Refugees and Communities of Color, Council on American-Islamic Relations-WA, the Refugee Women’s Alliance; and the Ethiopian Community Council. Individual community advocates also joined in the discussion including, Michael Nguse from the East African community and Abdullahi Jama.

“How do we take bolder actions to make sure that we are protecting, honoring and welcoming those immigrants and refugees living in our community” was the main takeaway for Councilmember Lorena González from Wednesday’s roundtable.

She cited a number of stories the participants shared about an experiencing assaults both verbal and physical including: individuals being subjected to hate speech because they were wearing a Hijab; day laborers fearing that their employers would try to withhold wages from them due to racist sentiments being emboldened; and a recent story of young woman who had a bottle thrown at her face while walking on the University of Washington campus.

Councilmember González emphasized that “this is happening here in Seattle”. More often than not these experiences and the urgency of them are lost due to the belief that, “We [as a city] are so progressive and inclusive, we like to convince ourselves that these types of incidents that we hear, that get national attention don’t happen here but, they’re happening.”

The roundtable’s takeaways, according to Councilwoman González, were a need to make concrete reforms in the services offered to immigrants, in addition to standing firm against xenophobia.

The councilwoman’s remarks were echoed by Velma Veloria, who represented the Coalition of Immigrant and Refugee Communities of Color at the table.

“We are looking forward to leaders and community members really developing some safe spaces to make the city of Seattle and the State of Washington develop a really safe space,” she said.

Ms. Veloria went on to identify some key actions and policies that the City and State could take to develop that safe space, including: tackling racial profiling, the city assisting new arrivals and long-time residents with obtaining citizenship, and countering bullying of immigrant children in schools.

To date, Councilmembers González and Lisa Herbold have proposed a resolution to condemn President-elect Trump’s offensive rhetoric and reaffirm “values of inclusion, respect and justice.”

Further conversation around immigrant safety seems poised to continue at the city, even as there remain concerns that the new presidential administration could withhold federal funding from Seattle due to its sanctuary city status.