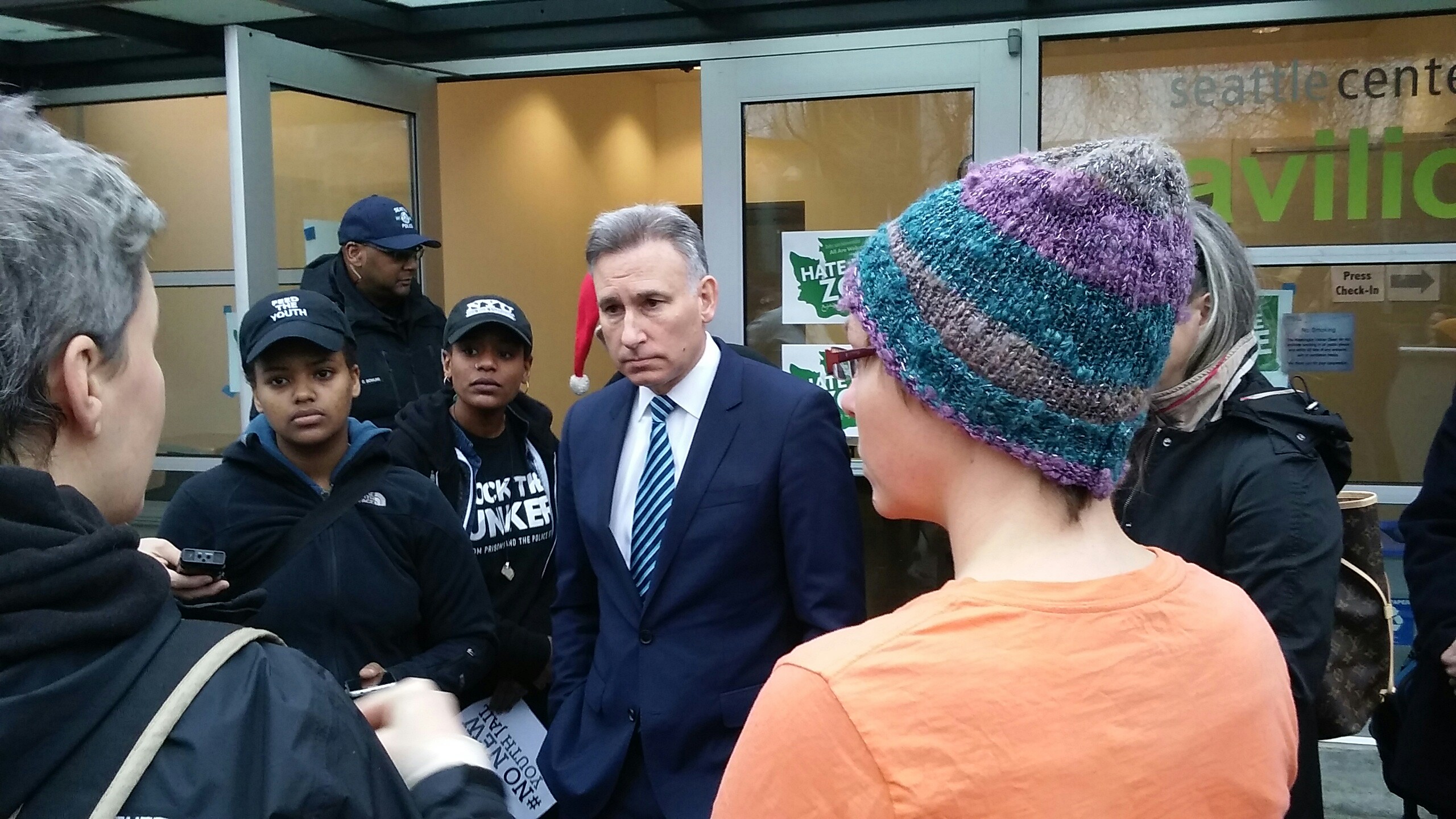 At an event called to condemn Hate Speech, a group of organizers aligned against the building of King County youth detention center decided to practice their right to free speech.

Demonstrators with the No New Youth Jail Coalition, an assembly of local anti-racist and prison abolitionist groups, interrupted speeches Monday morning by both King County Executive Dow Constantine and Seattle Mayor Ed Murray Monday at a press conference at the Seattle Center Pavilion.

The demonstrators took the opportunity, one of 2016’s last events both Murray and Constantine would publicly attend, to vocally oppose King County’s plans to replace the current Youth Services Center, with the new Children and Family Justice Center, which protestors label a “youth jail.” Their hope was to put pressure on Constantine and Murray to not go forward with a master land use permit, the last hurdle to clear in the Center’s construction.

Both the County Executive and Mayor were there to join local elected officials, heads of social justice organizations and labor unions to “Declare Washington State a Hate Free State.”

The event, convened by former 37th District State Senator and Congresswoman-elect Pramila Jayapal, was to focus on the recent uptick in hate crimes nationally since the election of Donald J Trump, as well as express solidarity with and support for local Muslim communities victimized by such crimes, including  the recent vandalism of a Redmond Mosque.

“We respect women, we value black lives, value those of all faiths, and fight for immigrants,” Jayapal said in remarks just prior to Executive Constantine taking the stage for what would end up being extremely brief remarks.

While several other city and state officials spoke, including Governor Jay Inslee, Constantine and Murray were targeted by the No New Youth Jail Coalition because of their involvement with the new detention facility.

In order to go forward with the facility’s construction, the City of Seattle is required to grant the County a special Master Land Use permit.  The City’s department of Construction and Inspections is scheduled to decide whether to issue the permit this Thursday, timing the Coalition says is suspicious given that it could have been issued months ago.

“We know what this was about in terms of them deciding on it during the holidays; Boeing did something similar with its tax breaks. They hope to pass this through under the cover of darkness while everyone is focused on Christmas,” said Saara Tekola, one of the demonstrators.

Tekola said it was critical to be vocal and disruptive around the issues so they would not be overshadowed by the holidays, which is why they demonstrated at the event.

Taking the podium after Jayapal, Constantine got out a few words before around two dozen demonstrators all wearing black – began chanting: “Hate Free State for Hate Free Kids” and “Free Our Kids – Do it Now”.

Constantine initially told the demonstrators to “go ahead” but, when it became apparent he was not going to be allowed to speak, he told the audience he would “step outside to talk” to the demonstrators to allow the event to continue as scheduled. Constantine departed the stage with protestors following as Governor Inslee, Mayor Murray, and others on the stage looked on bewildered.

Outside the Pavillion, Constantine met with protestors in a somewhat contentious exchange that served as a highlight reel of  the enduring differences between King County and the No New Youth Jail Coalition since voters approved a tax levy to fund the Center in 2012.

“How can you make it a hate free zone when you’re locking up Black and Brown kids? We feel your language has been disingenuous,” said a protestor named Rose, confronting Constantine.

Constantine stated that the County is still attempting to reduce disproportionality, but noted that no County has been able to do so while reducing overall numbers of juveniles in prison.  The average number of incarnated youth in King County has decreased from more than 100 in the past decade to around 50 or fewer on a given night.

To that, Bana Abera, another member of the coalition, noted that only 27 children were currently at the Center’s detention and questioned the decision to spend $210 million dollars on a complex that houses a detention center when there were alternatives, such as community-led efforts around the country.

“I absolutely agree that we should have alternatives,” said Constantine.

After a few exchanges, primarily characterized by talking over each other, Constantine was asked if he could reflect on what had been said by the members of the Coalition.

He responded: “You’re saying no one under the age of 18 should be incarcerated for any reason. I don’t agree with that.”

Coalition members, then mentioned data that showed imprisoned youth are more likely to be re-incarcerated, and to commit homicide,  violent crime, and drug offenses. They also mentioned that education should be a central focus of any public expenditure as opposed to further incarceration.

After additional exchanges, it appeared evident an impasse had been reached, and one of the members suggested a meeting be set up to talk farther, actually suggesting the Emerald attempt to broker it. Constantine agreed and stepped back into the Pavilion to attempt to give his previously aborted speech.

“Honestly, I don’t have a lot of faith in politicians,” said Bypolor Cherub, a coalition member, who made it clear he was speaking for himself.

“It’s up to us as people to force them into a corner and pressure them into doing the right thing. That’s what today was about. We need to look at what’s wrong with a system that throws people in jail,” he said.

While Constantine had been talking to demonstrators outside, Seattle Mayor Ed Murray didn’t fare much better than his counterpart at King County Council.

Chants of “Hate Free State means Cage Free Kids” rained down as he took the tact of attempting to talk over them.

“This is not a trump rally,” he said, raising his voice in an unsuccessful attempt to drown out the voices of protestors.

One protestor, Michael Moynihan, a vocal leader in the No New Youth Jail movement, stood directly in front of Murray, just below the podium and shouted loudly:

“Children are being imprisoned!”

Murray ceded the floor to Moynihan for a couple of minutes before continuing with his speech, expressing his frustration with the protests by saying, “We are mostly on the same side. If we can’t come together, we can’t change the nation.”  The crowd response was mixed, with some shouts of “let him speak” along with chants of “deny the permit.”

After brief remarks by Superintendent of Public Instruction-elect Chris Rekydal, Congresswoman-elect Jayapal came to the podium to appeal to protesters as a fellow organizer, asking them permission for County Executive Dow Constantine to now speak.

“If he addresses our issues,” shouted a demonstrator to cheers.

Fresh from meeting with protestors outside, Constantine stepped back to the podium and began by saying “Our country was founded on slavery…”

“Jails are slavery!” came a retort from the crowed, as chants kicked back up while cries of “let him speak” again met the chants.

Clearly exasperated, Constantine stepped away from the podium, with some in attendance patting him on the back as he exited to speak with local media.

“People have legitimate concerns about youth detention,” Constantine told the Emerald. “We would like to reach a point in our nation where we don’t have to incarcerate any children. And we need to do that by first asking why they’re there.”

While he spoke, a clearly agitated Murray passed by, not taking questions from the mini-press assembly.

Constantine pointed to initiatives the county has already made including a Restorative Justice pilot program, which sees youth offenders engage in active dialogue and agreed-upon retributive actions with victims rather than incarceration.

He also pointed to the recently passed Best Start For Kids Levy that, amongst other things, provides additional funding for early learning.  “We know those are the most important years of development, and additionally helps reduce the potential for a child to be incarcerated.”

While Constantine again re-iterated his willingness to meet to discuss the matters further with the Coalition, he noted this was a conversation that had been going on for the past 4 years, since the Family and Justice Center was approved by voters in 2012.

The 4 years has seen a fierce back and forth between both county and city officials, and organizers who have sustained protest over that time. Protests which have resulted in the County declaring they would no longer prosecute for status offenses (crimes unique to juveniles such as truancy violations), a resolution from the City of Seattle setting a goal of Zero Youth Detention, and $500,000 allocated to the group Ending the Prison Industrial Complex to parcel out to groups providing alternatives to incarceration.

However, the Center, scheduled to break ground in 2017 remains at the forefront of the protest.  Protestors see this week as critical, as the approval of the master land use permit is the last step towards that construction.

“We have to keep pressure on [Mayor] Murray and [Executive] Dow [Constantine] to deny this permit. Our kids need community. They need solutions. We have them here in our city,” said a protestor named Rose, who then named the 12 organizations EPIC has funded with the $500,000.

“Today just shows the blatant hypocrisy of our elected officials,” said Bana Abera. “Here we are talking about Hate Free Zone and yet our children are being locked up as a product of hate.”

Demonstrators would not be specific, but vowed continued action leading up to the Thursday’s vote to allow the Master Land Use permit.

Note: An earlier version of this article mistakenly pegged the cost of the Family Justice Center at $160 million dollars. It has been updated.