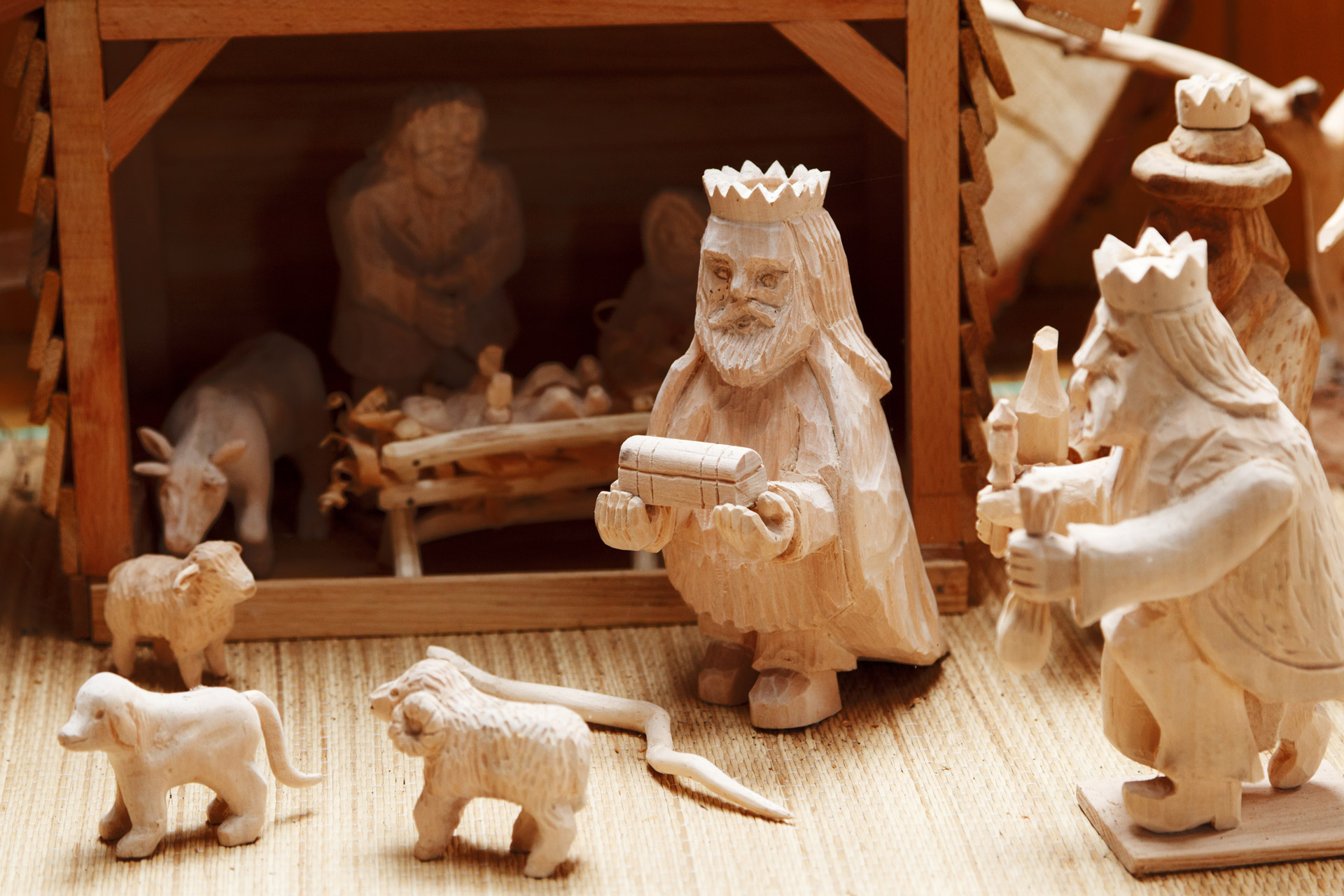 ‘Twas the night before Josh Day, and all through the Hood,
Not a Police siren rang, for once it was all good;
The People all came, from every which way,
To celebrate one another: Black, White, Straight and Gay;

They all came together, just like one big troop,
And decided that they would pitch in to cook soup;
Everyone was excited, the neighbors were pumped,
They cooked, and they served, and they ate a big lunch!

Now Christmas is busy, this time of year,
But the neighbors came together, to share in their cheer,
Because one thing for sure, was on everyone’s mind,
To serve those in need, to be loving and kind;

So, just like Josh, who helped the oppressed and the weak,
The neighbors came together, and they formed #TEAMMeek;
They made soup, and brought coats, and gave them for FREE,
They sang, and they danced, under the Joshua Tree;

Some people were rich, some people had few,
But they all came together, and jammed out with the crew;
The Raging Grannies sang carols, as the people ate pie,
And what a surprise, even Santa came by!

But whose Josh? Well, Gosh, that’s a mighty good Q,
Here’s a hint, it’s the same guy who said He died for you,
But ever since he left, things got real bad,
So he got sent back to fix shop, this time by His Dad;

“Josh”, God said, kind of upset,
“Go tell Mayor Murray, treat my Youth with Respect!
It’s not fair that they lock up my children in prison,
So I’ll send you to Seattle, and they’ll hopefully listen”

See Josh is Joshua, or Yeshua, Jesus,
He represents all the Love and Peace in between Us,
But here’s a little secret, that’s finally out the bag,
Josh had a Mom, not just a Dad,

And though His Dad gave him life, his Mom gave him birth,
His Dad is in Heaven, but His Mom is this Earth,
And She’s getting real hurt, we must come together and heal,
Trump might be the puppet, but he can’t make this deal.

But The People, they can, even just for one day,
And they proved that they could, on the first ever Josh Day,
And now Jesus is back, this time in Seattle,
So go tell the Den of Thieves, 2017, We battle.

Not battle for War, but fight for the Love!
For the Mother Earth below, and Father Sky above,
For all of our cousins, all the animals too,
All the plants, all the people, especially you.

So tell everyone, your family and friends,
The soup, and the music, and good times never end;
When we all get together, and we gon be alright,
So Merry Josh Day to All, and to All, a Hood Night!! 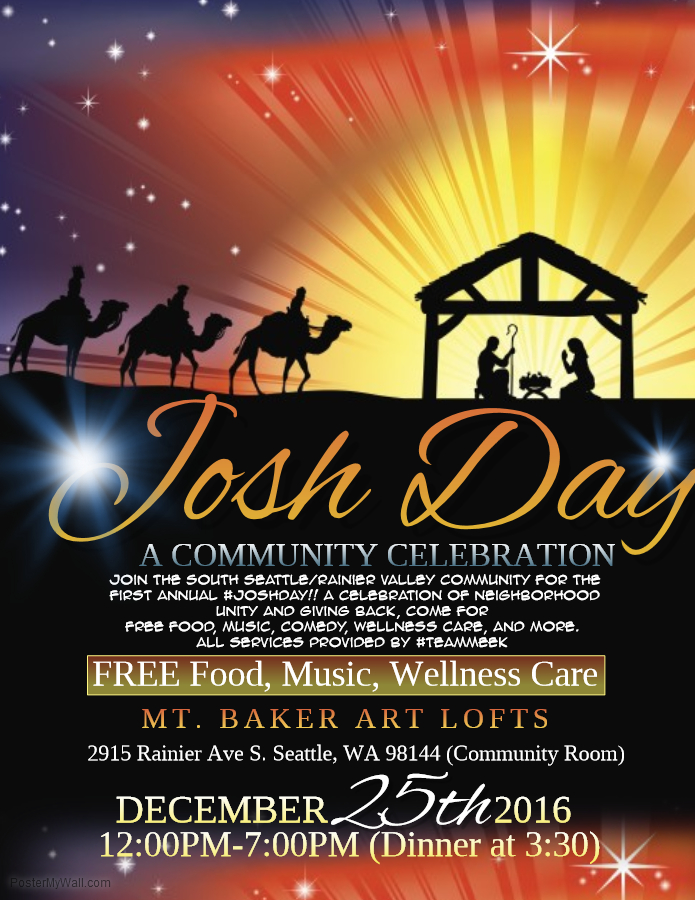 Josh Day: A Community Celebration, is about walking the walk. For the past few months, I’ve been dressing up like Jesus H. Christ, and using it as a form of social justice performance art. From supporting the #BlockTheBunker coalition, to attending the Seattle City Council meeting on behalf of “My Dad” and #NoNewYouthJail, it’s been a helluva ride… pun intended.

But after all the articles came out, and people were requesting “Jesus at the Seahawks game”, I thought I’d do my research. As a Muslim studying Jesus, whom we call Issa (pbh), I wanted to know what this “White Jesus” figure was all about. So I read up on him, and found out his real name.

Yup, that’s right. Josh. Well, technically it was Yeshua, which would be Joshua today (they didn’t have J’s back then… sucks, I know). I began to really study this man. A man of peace, love, kindness, and most importantly… a revolutionary organizer who led hyper- local community movements to inspire his people to liberate themselves from Roman occupation.

In the Trump era, it’s good to know what the fearless are willing to do in the face of oppression.

And now, with Mayor Murray, Seattle City Council and the King County Council on the verge of spending almost HALF A BILLION DOLLARS on a Police Station and Youth Jail, at the same time the Seattle Police Department has been under federal investigation, it makes you think… is this it?

End of Days? Might need some Jesus. I mean, Josh.

I decided with “Christmas” coming up, I’d rebrand, get my neighbors and friends together and see if we could do one small act of kindness, and feed all of our neighbors, just like Jesus did.

That was two months ago. Now, on the night before Josh Day, which not only is a community feed, but will also be a clothing, hygiene product give away and incredible musical show featuring everyone from the Raging Grannies to Father Solstice, I have seen the proof. Right now, as I write this, my room is full of clothes, shoes, socks, food, water, feminine products, vitamins, needle exchange, hand warmers, tents, bus tokens and literally hundreds of dollars in donations from the local community… for the local community.

The lesson I have been humbled to learn in this experience: Everyday people, you and I and the neighborhood we live in, are completely capable of providing for one another. 100 percent, with leftovers. And considering the very volatile world we are about to enter next year, I feel this is the most important lesson I and anyone of us could learn.

That the people, united, will never be defeated… and Radical Community Love is what will heal us and our planet.

It’s what Josh would do.

Jamil Suleman is an artist and activist from Kirkland, WA currently residing in South Seattle. Find him online at http://www.jamilsuleman.com and follow his Jesus Piece at @supitsmejesus on Twitter.