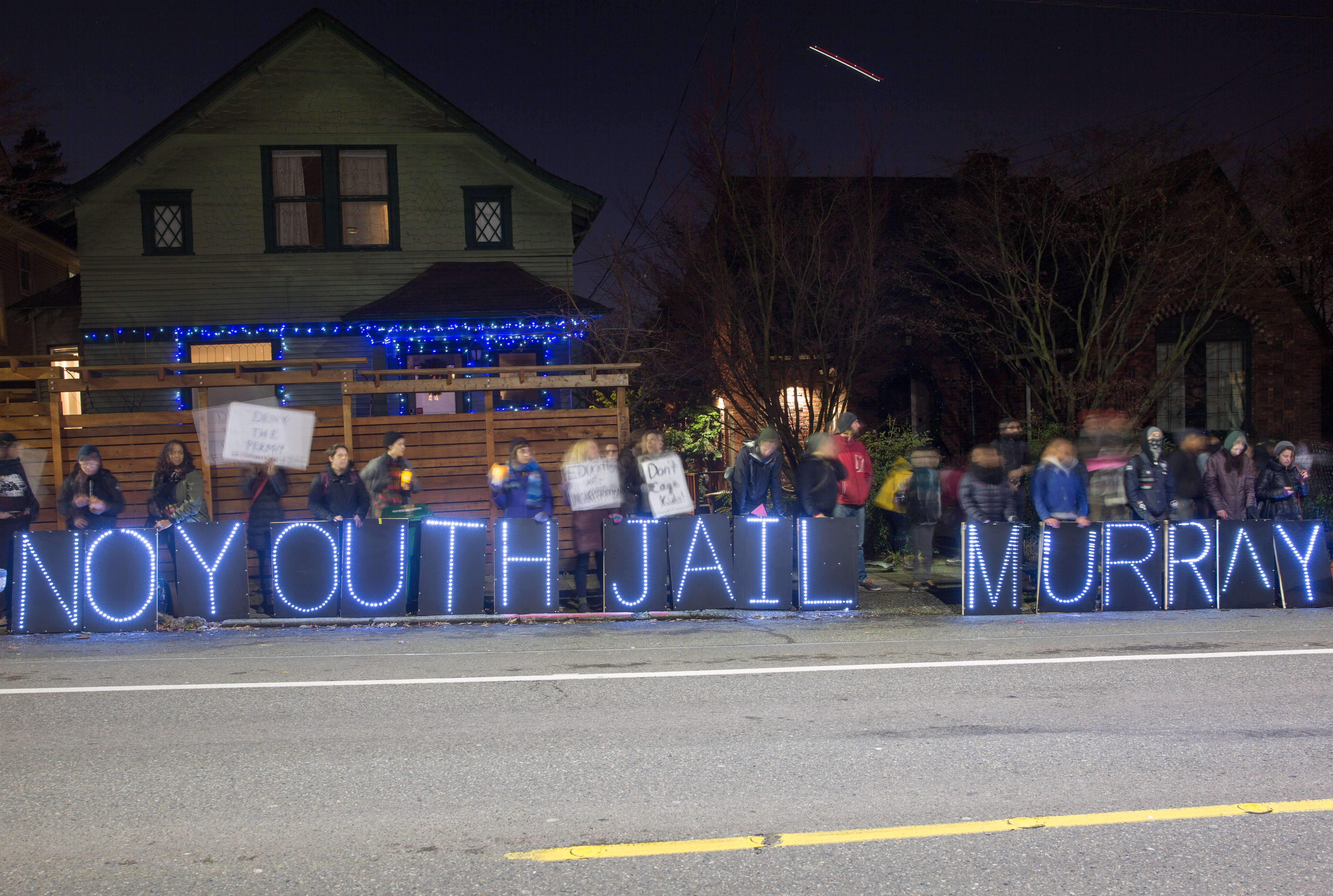 Organizers against the construction of King County’s youth courthouse and detention center met the City’s decision on Thursday to grant required building permits for its construction with dismay, if not shock.

“I honestly believed the City of Seattle would settle on the right side of history. Despite the incredible organizing of community, heartfelt testimony, public call outs, and many, many conversations, the City still decided to grant the permits to build a $210 million children’s jail,” said Nikkita Oliver, speaking on Seattle’s Department of Construction & Inspection’s decision to give the go-ahead for the county to construct the King County Family and Justice Center, pending a 14-day approval.

As a member of the No New Youth Jail Coalition, Oliver has been locked in an intense struggle against the Center, or youth jail – as its been dubbed by the Coalition, since voters approved a tax levy for it in 2012.

For Oliver, the decision to build a new complex housing a juvenile detention center where one already exists, was a baffling mis-prioritization of funds given the reality of a shortfall in the county’s general fund, and a projected $74 million hole in Seattle Public School’s budget.

“The City and County seem more interested in investing in corporate interests and in white supremacy than in prevention and education. They are acting negligently and are therefore culpable for the negative impact.  The County’s own audit states that the building is in ‘good condition’ requiring a little under a million dollars to do the necessary repairs,” Oliver added.

The artist, lawyer, and community organizer firmly supported the No New Youth Jail Coalition’s last-ditch efforts this week  to force the city to deny King County the Master Land Use permit that was approved on Thursday.

Actions during the past week included interrupting the speeches of King County Executive Dow Constantine and Seattle Mayor Ed Murray at an anti-hate rally on Monday and demonstrating outside Murray’s home on Tuesday evening.

Additionally, the coalition circulated a petition and organized an email campaign directed at the Mayor’s office in attempts to get the building permit denied.

Murray, who in the past had been reticent to go on record about the Family and Justice Center as opposition to it predates his administration, was forced to do so in response to the campaign, albeit in an auto-response to emails about the Center:

“The voter-approved Children and Family Justice Center project is designed, funded and operated by King County. The City of Seattle’s role of permitting is limited to reviewing technical criteria concerning land use and environmental issues. The Mayor’s office cannot intervene in any permitting decision as it is strictly a technical decision that is made by the Seattle Department of Construction and Inspections. The City Hearing Examiner’s decision on the City’s denial of a permit for the Shell Oil Rig at Terminal 5 reaffirmed that the City must base any permit decision on the technical facts and law presented in a permit application, and not on any policy consideration,” the automated response read.

After the actions on Monday and Tuesday, the Mayor’s office took precautionary steps on Thursday to ward off protestors at City Hall during the decision. Access to the 7th floor where the mayor’s office is located was limited, forcing visitors to go to the 5th Avenue lobby to check-in via a courtesy phone.

A City Hall security guard acknowledged the measure was taken due to concerns over potential protest after a woman asked why the building’s elevators had their  7th floor buttons disabled.

If the mayor’s office expected an antagonistic reaction on Thursday, it received one, as Murray’s stance left most members of the Coalition unsatisfied.

“We wholeheartedly disagree with his position that this decision is solely reliant on technical criteria,” said Bana Abera, an organizer who took part in both the speech interruptions and demonstration at Murray’s house.

“The decision to build a new jail that disproportionately incarcerates black and brown youth is not technical; it is political. The decision to pass this permit after months of scrutiny by community, on the eve of Christmas was a political decision to attempt to sneak this past with little to no time to appeal. This permitting decision, along with the statement by our mayor is full of cowardice. As mayor, he cannot avoid responsibility for this project, and this jail will be his legacy,” Abera added.

Thursday’s decision caused a move towards self-reflection in other city officials.

O’Brien was referring to his decision as head of the City’s Land Use committee in 2014 to help shepherd through legislation at King County’s request that eventually led to the issuance of the permit for construction of the Center.

“I could’ve just held the legislation,” he insisted. “We have a goal of zero incarceration of youth in our city. The City just wrote a check for community-driven alternatives to incarceration. We should be spending more on those as a society rather than prisons.”

The city councilmember, who represents Seattle’s Northwest district, says his evolution on the Center came about from listening to community members talk about their experiences with the criminal justice system, along with expanding his knowledge on the discrepancies in how it treats people of color versus White people.

“I have teenage boys who aren’t perfect, but are surrounded by supportive structures in life. They have myself, my wife, a school system and justice system that can overwhelm them with support when they make a mistake,” he said, adding that is not true for the marginalized of society.

While critics say not building the Center would be tantamount to giving juveniles free rein to commit even the most horrific crimes with impunity, O’Brien staunchly disagrees.

“The reality today isn’t do we have a youth jail or not. We already have a youth jail. I believe we can address the maintenance aspects of the jail and put that money into other areas in desperate need of attention like education, and support services.”

For the councilmember, it is a question of priorities and how to best address youth crime. O’Brien believes officials at the city and county level should target unaddressed causes that lead to the symptom of juvenile crime, such as homelessness, mental health services, and neglected communities rather than “doubling down on incarceration.”

He cites a study showing that imprisoning youth simply creates a cycle of incarceration, which in turn creates a necessity to build more youth prisons.

The latter is one of many reasons organizers point to continuing their resistance against the detention center regardless of this latest set-back.

“It’s somewhat hypocritical that our same leaders in the city and county who say we should resist Trump at every turn during this next four years, tell us we need to move on and abandon our struggle against the jail,” said Luis Rodriguez, owner of the Station Coffeehouse in Beacon Hill which has been a headquarters for planning meetings for the No New Youth Jail Coalition in the past.

Opposition, while in recovery mode, seems in no danger of evaporating.

“This battle is not over and we are still demanding #NoNewYouthJail and will see to it that Constantine and Murray hear us loud and clear,” said Bana Abera.

“We are committed to fight this project at every step of the process, until it is cancelled.”